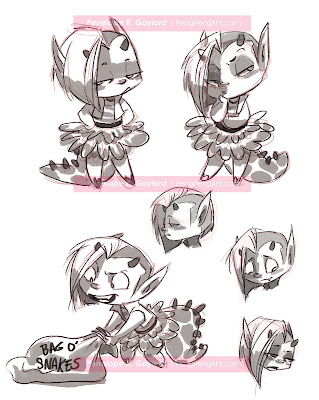 i think an "i'm sorry for the silence" may be a bit of an understatement when it comes to this post. i don't wanna give up on this blog because it's still my "central hub", so to speak. once upon a time, i used to be bummed out about my favorite artists never updating their websites or blogs cuz they always say they're busy. and i was like "but it only takes like 15 minutes to post something, they ain't got that??" it has become more and more apparent to me that the answer to that is no, they don't. because the 15 minutes that could be used to post something is likely being used for other things after work, like relaxing with pets or watching tv or playing video games - just to deflate from the work.

so long story short, i'm still here. i'm still drawing things, i'm still creating characters and original stories, and still drawing some fanart. but mostly work. currently though, i'm in the middle of a move. our 1-bedroom apartment was always a temporary thing when we moved from DC to LA. and now we're finally in a good position to get a bigger place. in other words, work has been good. life in LA has been great. i would recommend it to anyone if given the opportunity. =) but in an effort to keep this thing alive, i'm posting some of my most recent sketches of my little devil/little monster Lucy! (apparently, animation studios don't like using the word "devil" in their kid programs. which makes sense. just thought it would be ok cuz of the content but whatevs. so i may be changing it to Little Monster instead.)