how soon is now 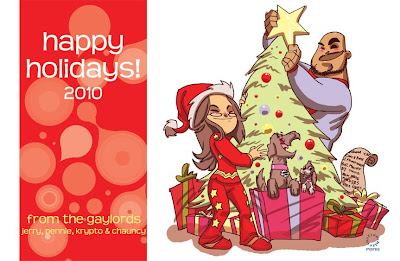 i forgot to post this before christmas. yeah i'm a space case. the weeks leading up to Christmas has been ridiculously busy for me and the hubby. every day there was some project that needed completion or some commission that needed to get started. and in all the hubub of that, i didn't even get to wrap any presents until 2 days before the big day! so i pulled a couple of all nighters to get it all ready for parties and such.
theFranchize drew the main image - i just designed the card and stuff. i think we make a decent team. ;)
well, at least i'll get this in before the new year. =P working on some of the half-price sale commissions right now so i'll post that later on. hope everyone had a Merry Christmas and here's to a prosperous New Year! =)
No comments: 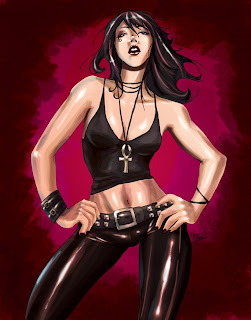 it's cold and rainy outside so i guess it's a good thing i have to do work today. =P of course i ventured out into the world to get some eggnog latte first. cuz if i don't have coffee and i gotta work, i'm not a happy camper. =] i'm getting so excited about christmas which is no surprise seeing as how i've been listening to christmas music since november 5th (i told the hubby that i won't listen to it until after his birthday). well, i did sneak some christmas music in here and there since right around halloween but that's neither here nor there. :} its tough to focus on all this work when i've got wrapping presents on the brain. but i did get a couple of responses to my holiday sale so i gotta get on my Ps and Qs (whatever that means) cuz these sexy ladies ain't drawin themselves!

the image is a gift that i made for a new friend of mine. she's the wife of one of my hubby's BFFs and we met for the first time when we went to San Diego for another friend's wedding. she's cool peeps and i'm glad we got to hang out. i miss her already! =P anyway, she's knitting me a hat that i can't be more excited about if i tried. and this is my exchange. unfortunately, its nothing she can wear and her two little boys probably won't appreciate. but it is of her fav comic character, Death. now normally i don't post stuff until the recipient sees it but i don't think she knows my blog exists so i'm in no danger. now i know Death (from Vertigo Comics - i think she's the Sandman's sister) is probably very emo and dreary but i couldn't help but give her the sexy treatment. it's all i know to do! hope she don't mind it. =)
No comments:

i posted this on my deviant journal last monday but neglected to put it on here as well. i am doing a holiday sale for HALF-OFF Comic Commisssions at this time! i know our pockets could all use a little break this time of year so if ur looking to get the art-appreciator in ur life a one-of-a-kind piece drawn by urs truly for the holidays, now's a great time!

here are the specs: 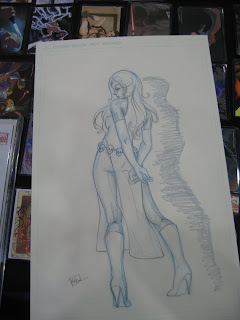 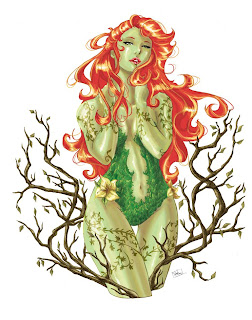 original pieces make for great gifts for art appreciators, especially when given in a nice frame. i can draw a favorite character or an original character if references are given. i'd love to draw for u or ur friends/family members!
if ur interested, email me at pianjag@yahoo.com and we can go from there! i love me some hot & cheap deals so get it in while the gettin is good! =) go forth and tell all those u know.
No comments: 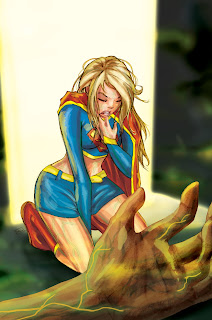 haven't posted anything in a while and yet i find myself extremely busy. sigh it sucks when i do stuff that i'm not allowed to post until the release of said project. makes me seem like i'm just sitting here twiddling my thumbs. still, i guess it's better to be busy than have nothin to do.
currently i've had my hands full of Bettie Page images that i'm working on for sketchcards that won't be coming out till 2011. so i can't show it yet. however, i think i can say with some confidence that at least 1 of them may be one of the best things i've ever drawn. then there's this ongoing website project for our printing company. still dunno how i moved into a web designing field but i guess as long as they like it, that's all that matters. but with that, i can't show it yet either.
in all the hubub i forgot to post last month's PendantAudio.com Supergirl cover #43. i'm not entirely sure what is in store for this crossover series that's happening but my guess is ZOMBIES. =P
speaking of zombies - if u haven't been watching The Walking Dead on AMC, holy crap u definitely should! it's an amazing series. yes there are zombies and i've really taken quite a fascination to them as of late cuz i love shooting them on Call of Duty. however, it's really story driven. it temporarily filled the void that Spartacus has left in my life. =*( 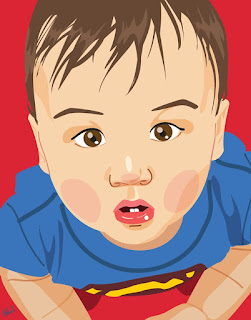 this past weekend, i celebrated a BFF's son's 1st birthday as well as her own (her baby was born on her berfday last year!) i gave him a toy that has parts he could conceivably stick in his mouth cuz he really likes doing that. but for her gift, i decided to give her an illustration of her son much like the one i made for another BFF of her daughter last month. and since we gave him the Superman shirt that he was wearing in the photo i used, i thought it was the perfect shot to illustrate. =) again, extremely intimidated about working on a friend's picture. and as if that is not intimidating enough by itself, i also wrestled with the knowledge that this is something she can do herself and do it better than me! (i've told her time and time again that Illustrator is her bitch.) i guess i just get to beat her to the punch - unless she did make one already and just hasn't shown me yet. but again, as long as she likes it, that's all that matters. =D
1 comment: