[listening to "this is how we do" by katy perry] 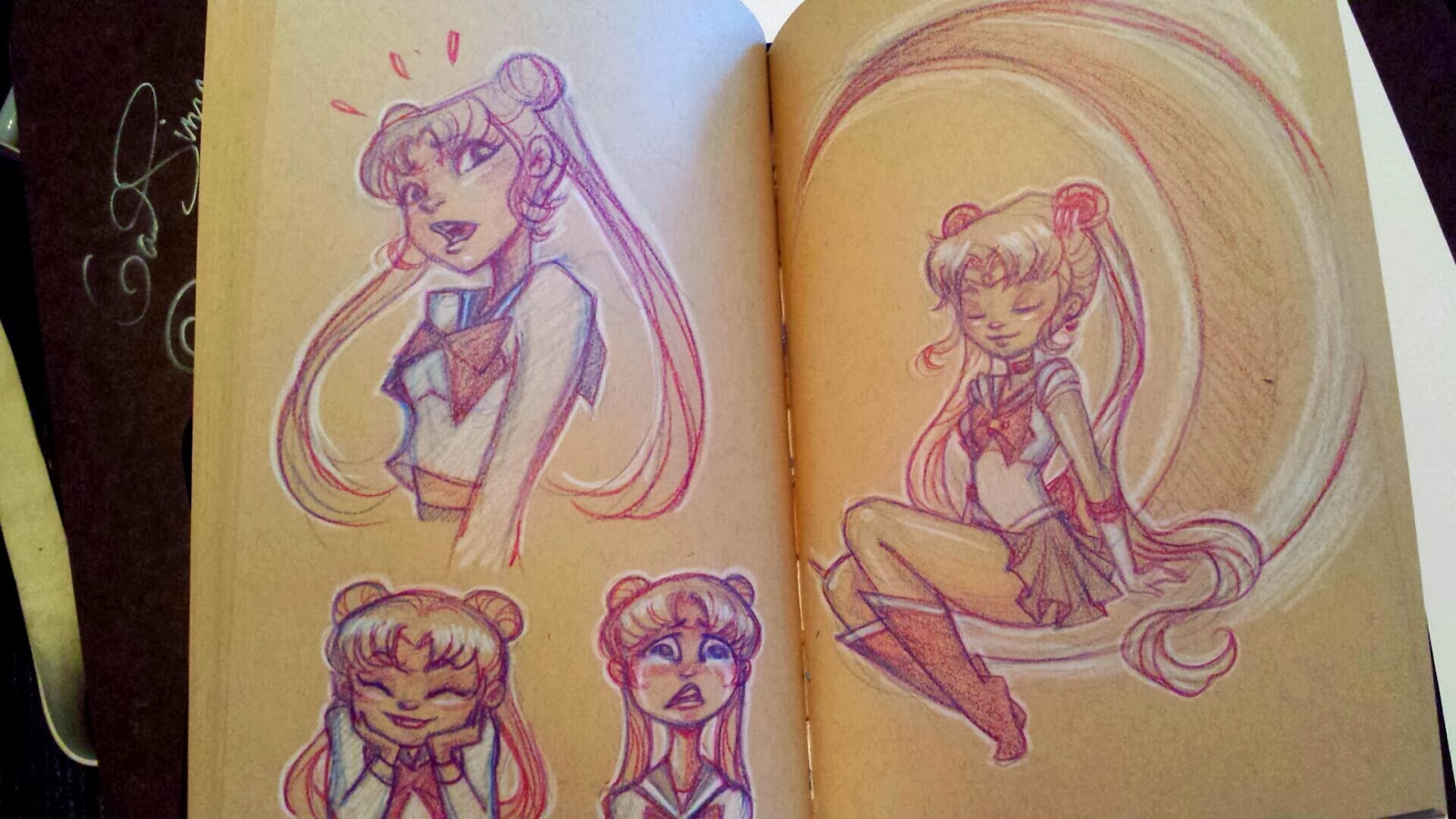 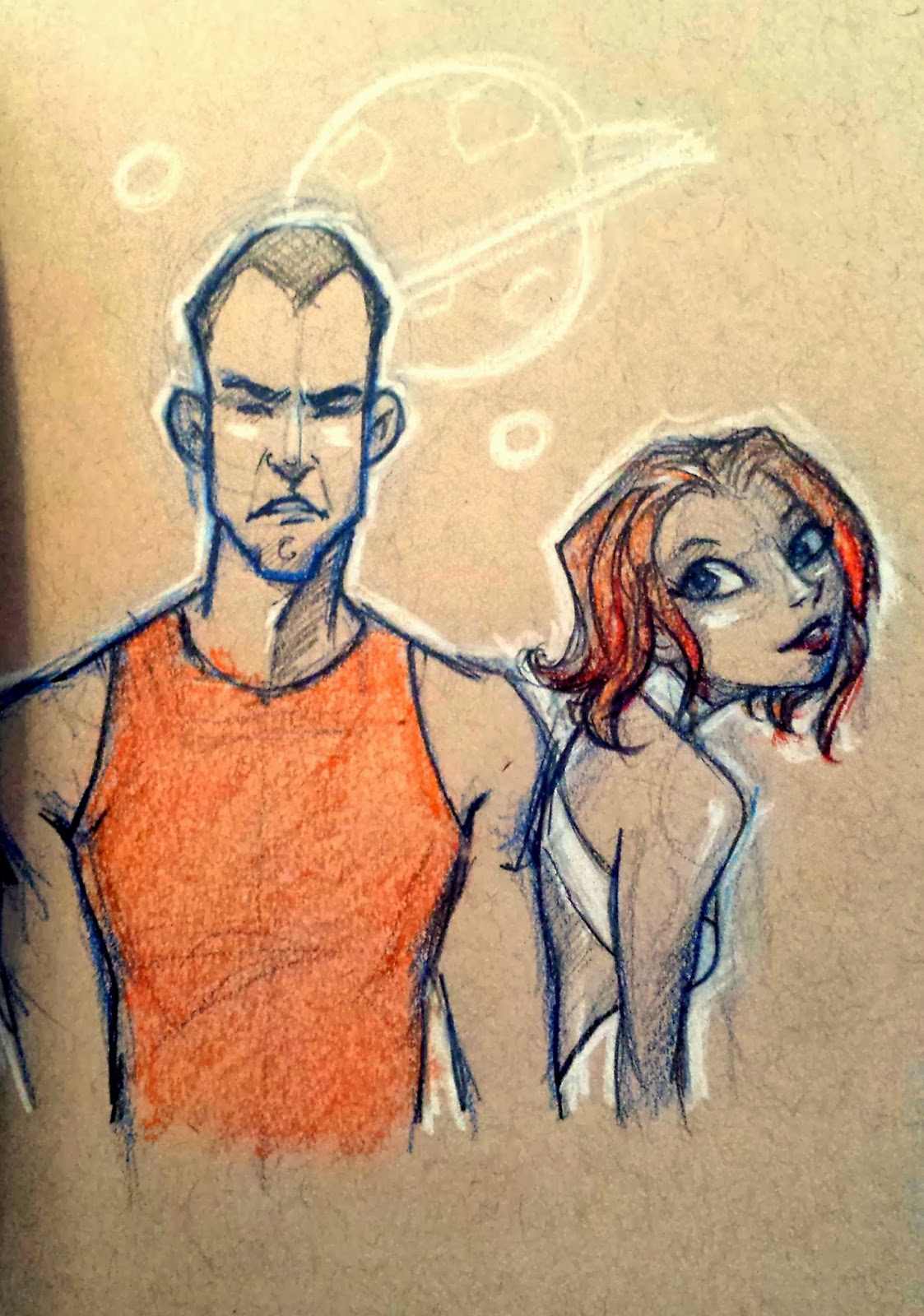 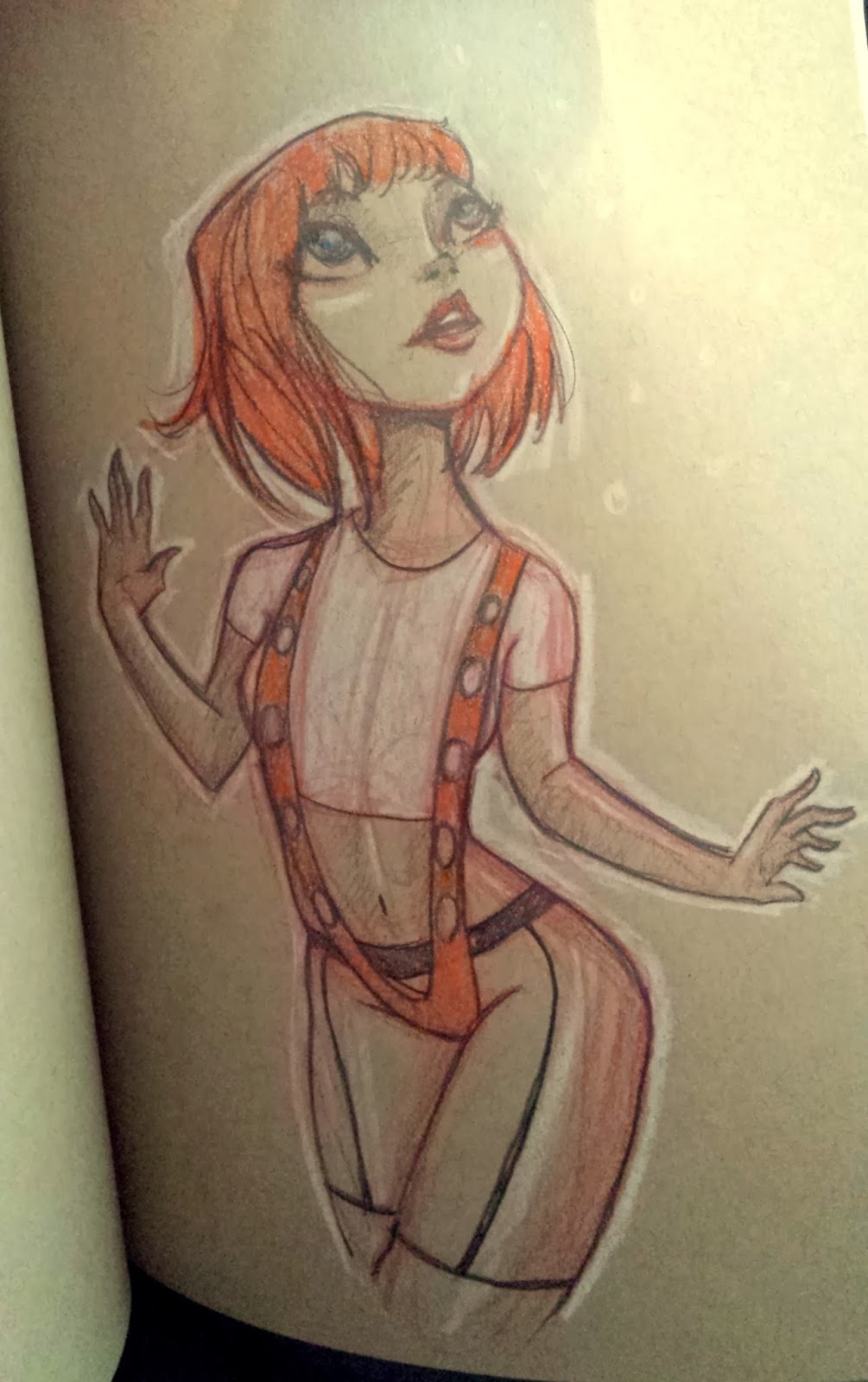 ok, so i know i broke my own rule about 1-word post titles. but in my defense, it was either gonna be sketches which could apply to many other posts throughout the year OR dump which just isn't pretty. so anyways, just thought i'd post some sketches that i've originally just posted on instagram and/or twitter. i do this cuz i like seeing sketches in other people's blogs so i can only assume that others might like that kinda stuff too. so enjoy some sketches and have a great weekend folks!
No comments:

[listening to "picasso baby" by Jay-Z] 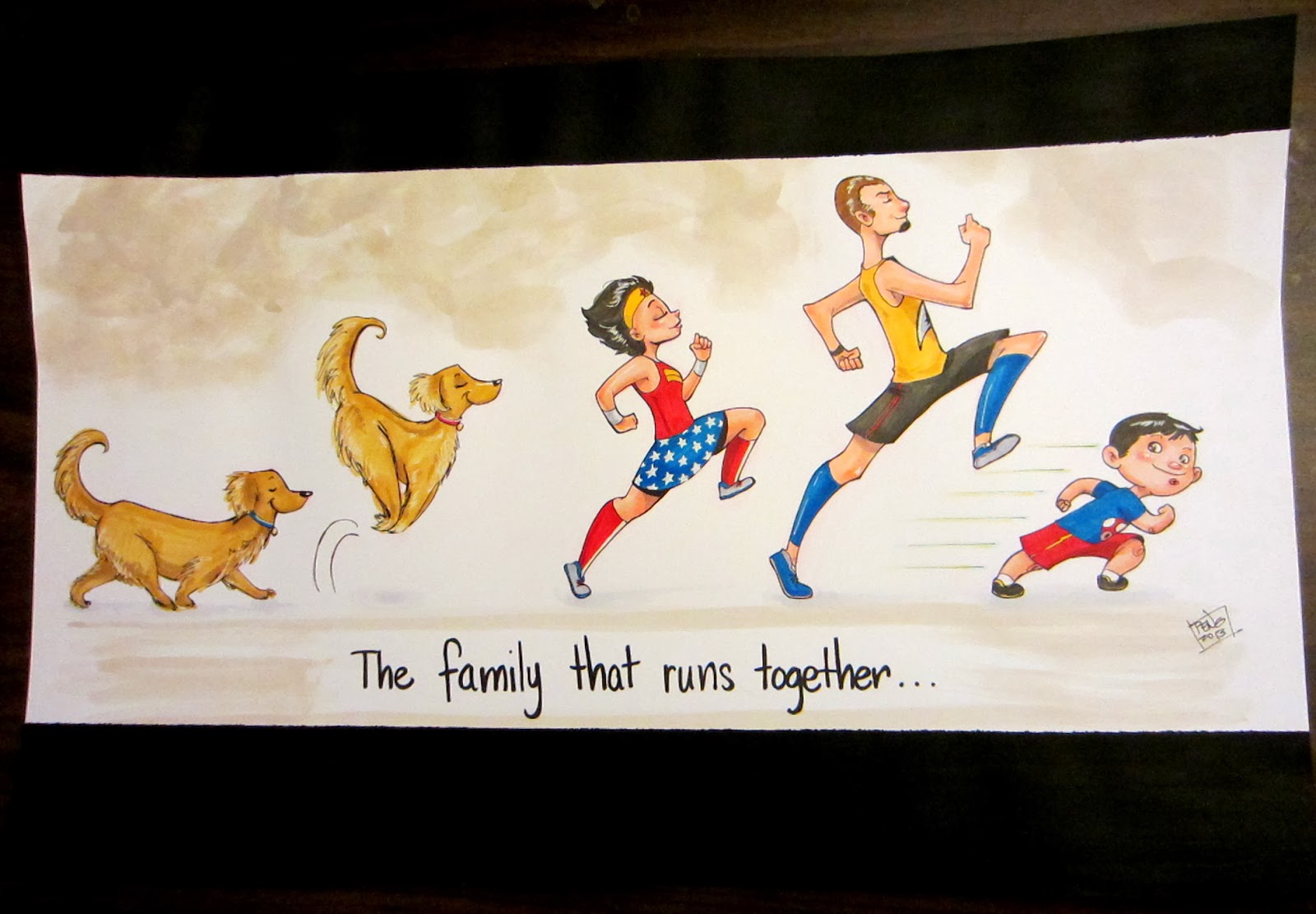 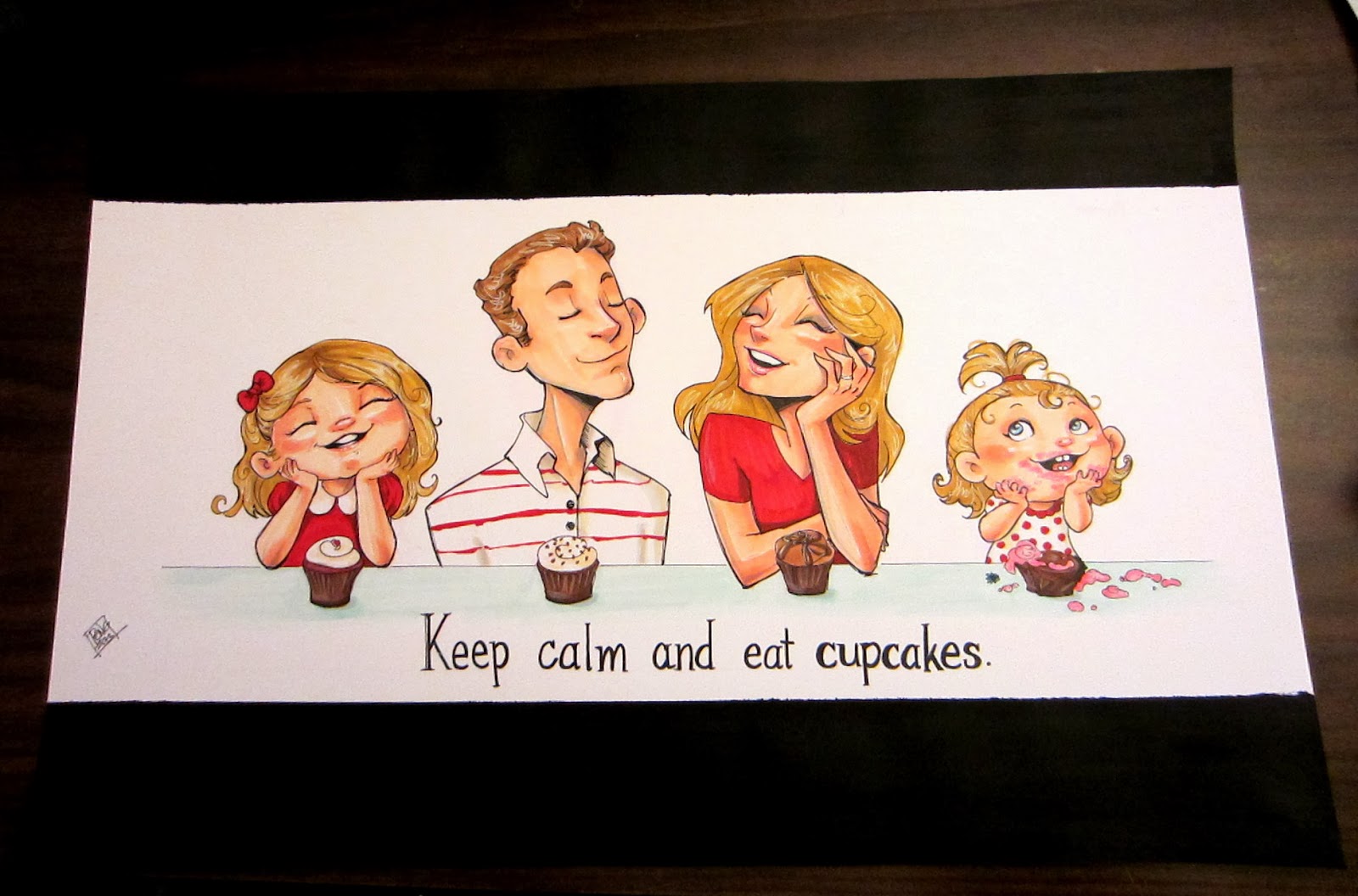 just thought i'd share these 2 pieces that i made as christmas gifts for some very important ladies in my life. i sure hope they're not tired of putting up my art on their walls. =) they both love to run and they both love Georgetown Cupcakes (but who doesn't?!) so i had some good themes to choose from. drew these on 11x17 smooth bristol with my copic drawing pens and copic markers. threw some brown ink wash on one of them to see how that would turn out. and i really wanted to make em "widescreen" but i wanted to make sure they could easily get frames for em. so i used black gouache to paint solid black bars on the top and the bottom.
No comments:

[listening to "enjoy the silence" by depeche mode] 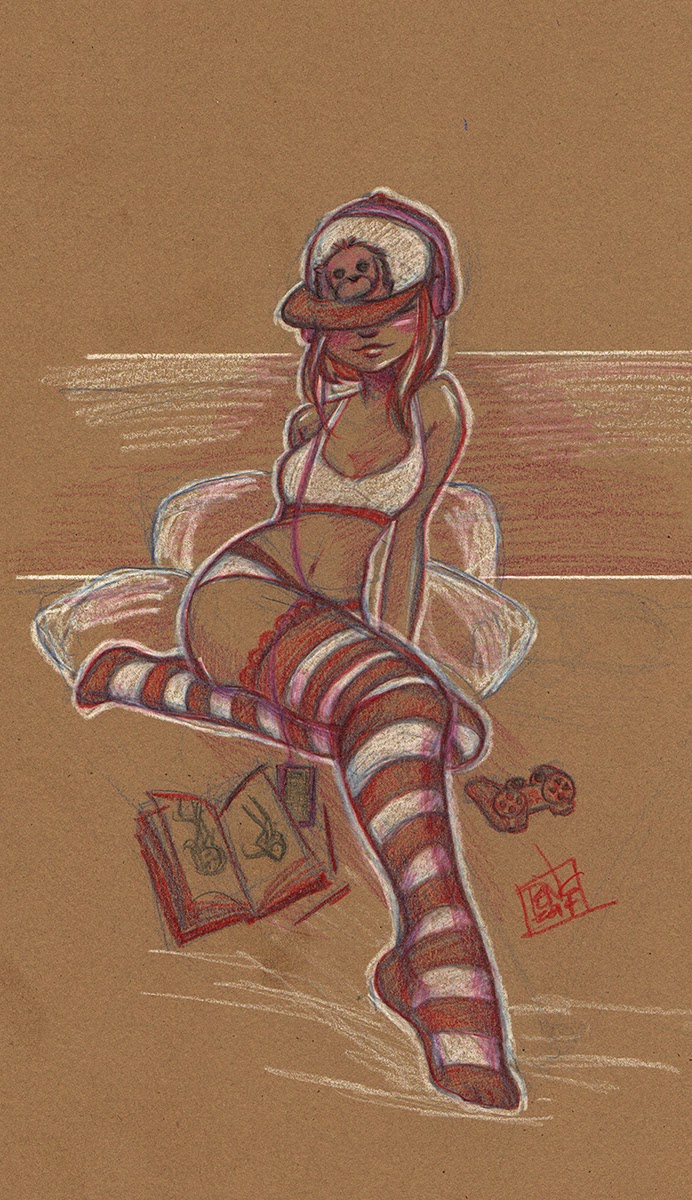 this is my 1st submission of the year to the Girls Drawin Girls blog's weekly theme. this week it's stockings. but since i don't really wear stockings - like ever - i figured i'd go with a stripy one for a not-so-typical gal. i don't usually give my drawings/sketches names, but if i did, this one would probably be called typical friday night. sketching and video games in bed - what else does one need?! and yes, i threw my chauncy in there again - this time on her hat. cuz they can't stop me! =P

used my derwent inktense pencils for this. tried a new "Carmine Pink" one that looks very red. =/ i have yet to find the correct pink color on these pencils. one day (and many dollars later) i'll find it.

u can check this out on the GDG blog - http://girlsdrawingirls.blogspot.com/2014/01/peppermint-stockings.html. while ur there, check out the other lovely ladies of the group. they're pretty great!
No comments:

[listening to "green light" by beyonce] 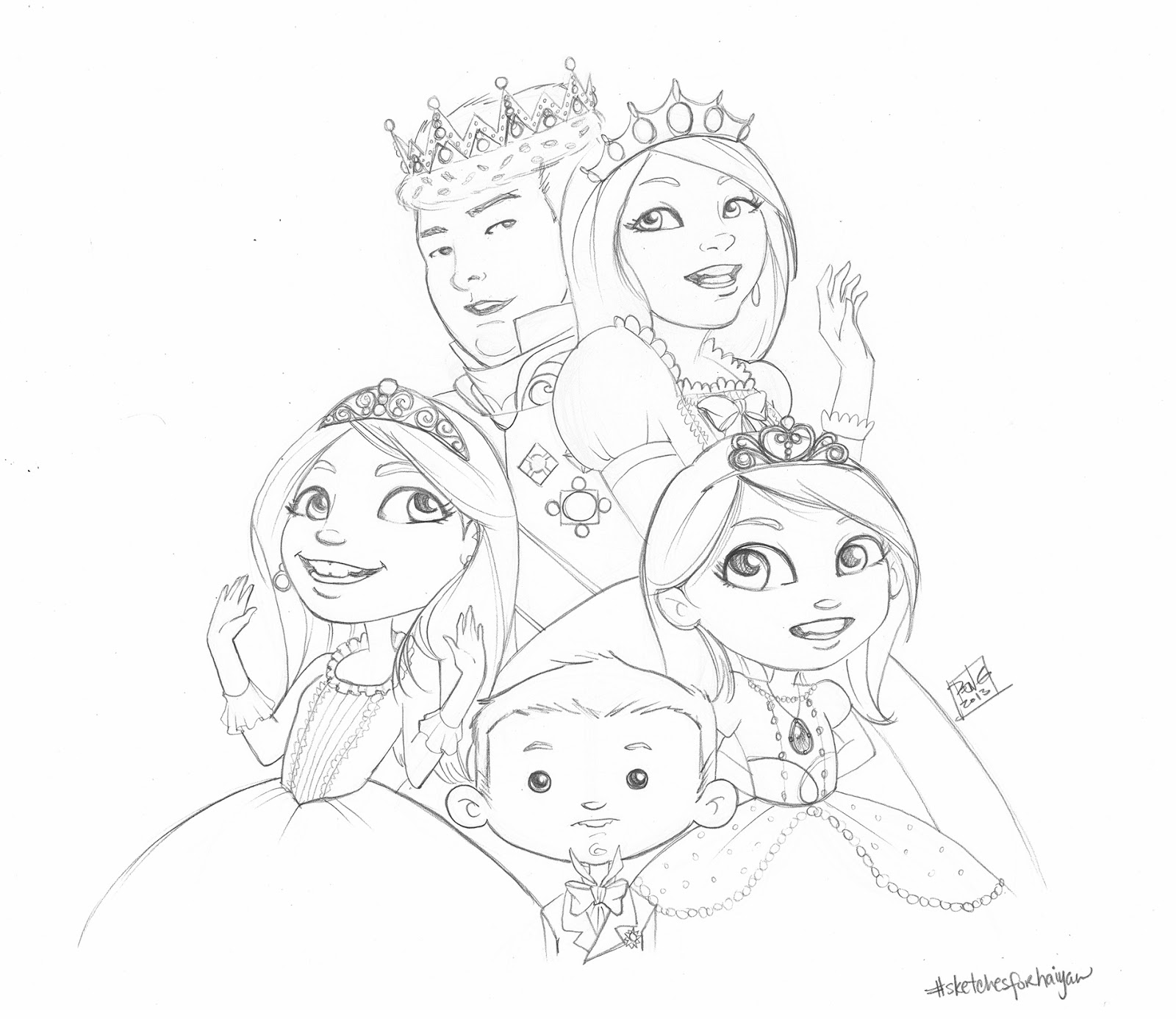 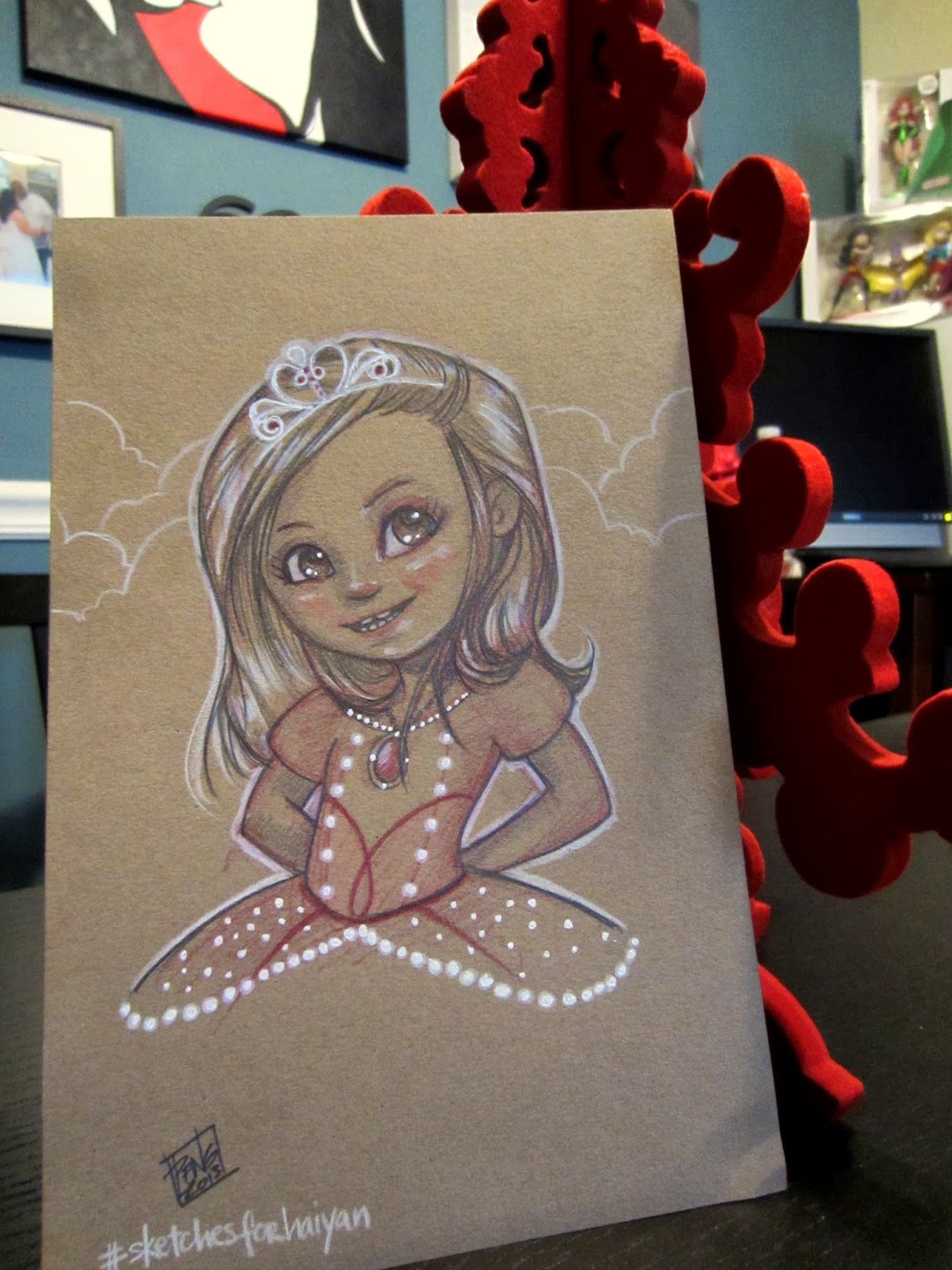 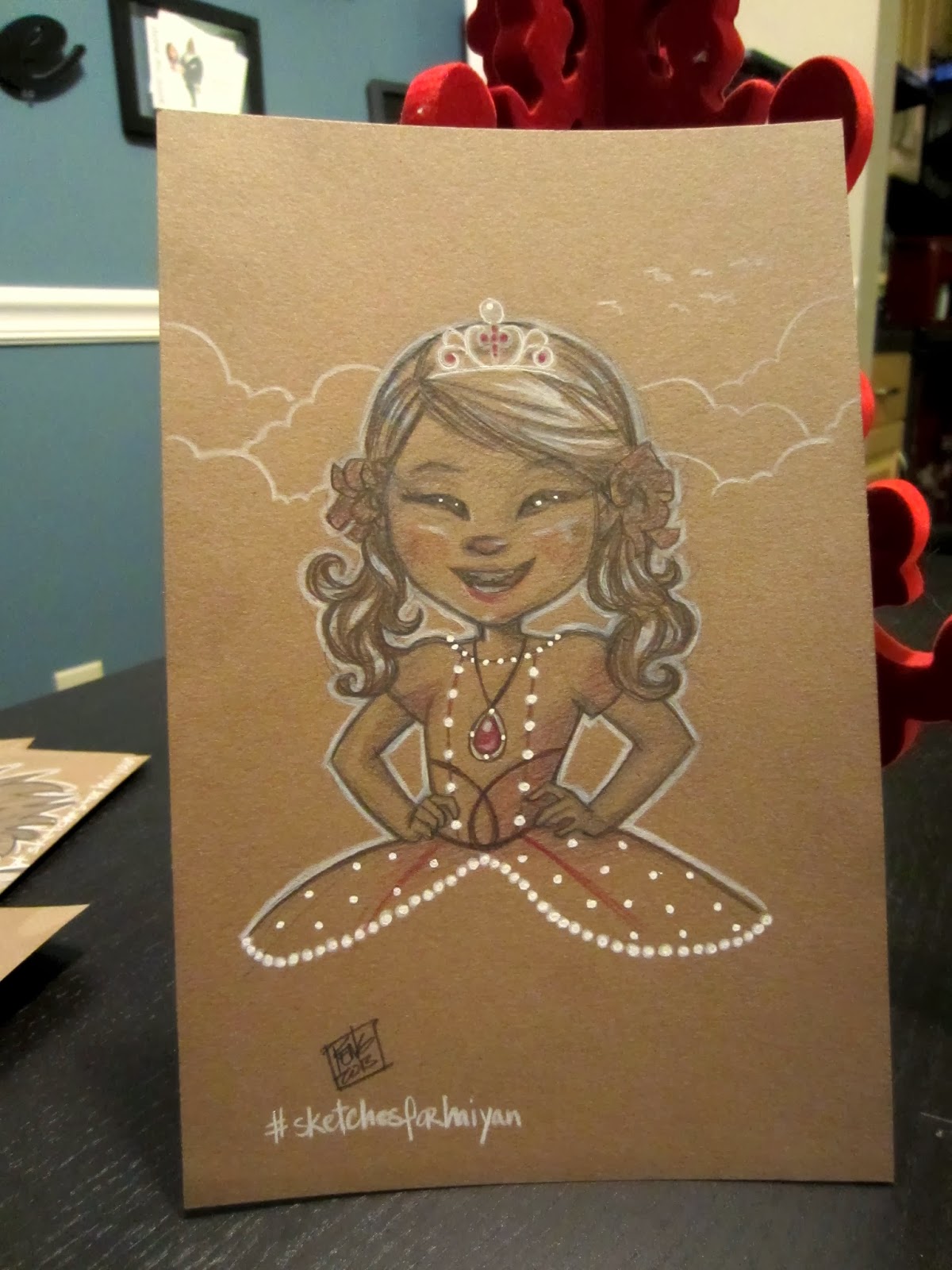 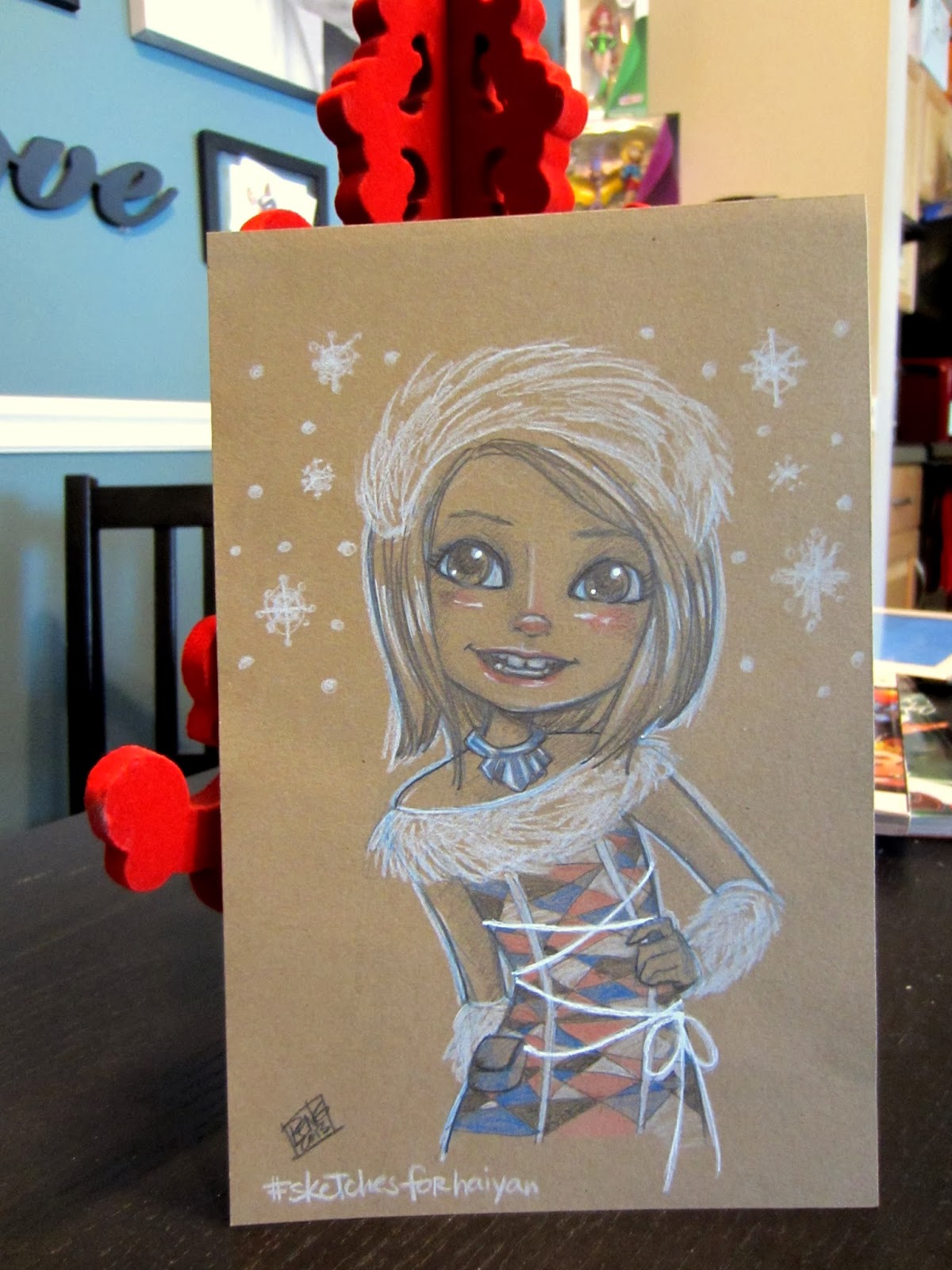 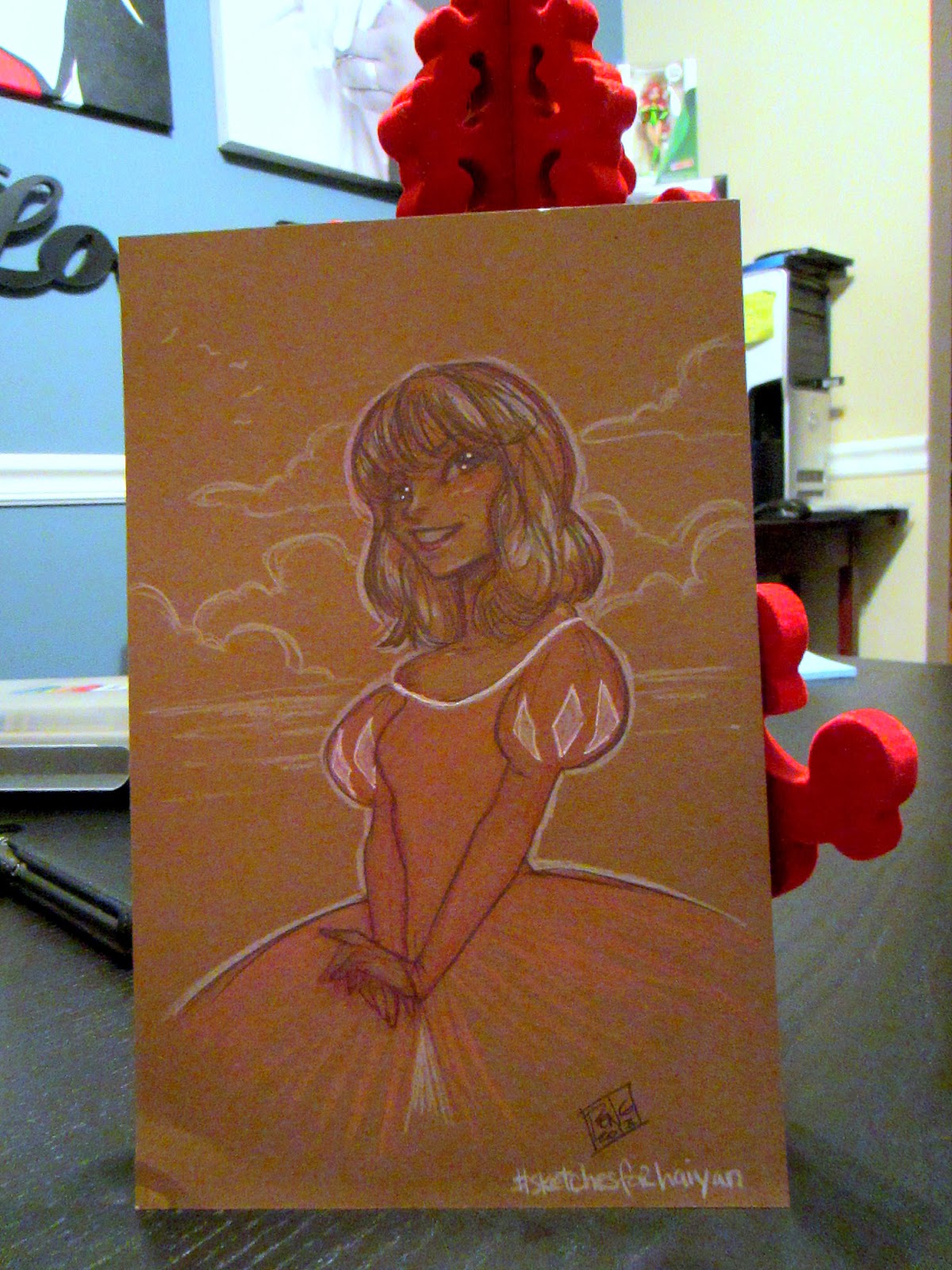 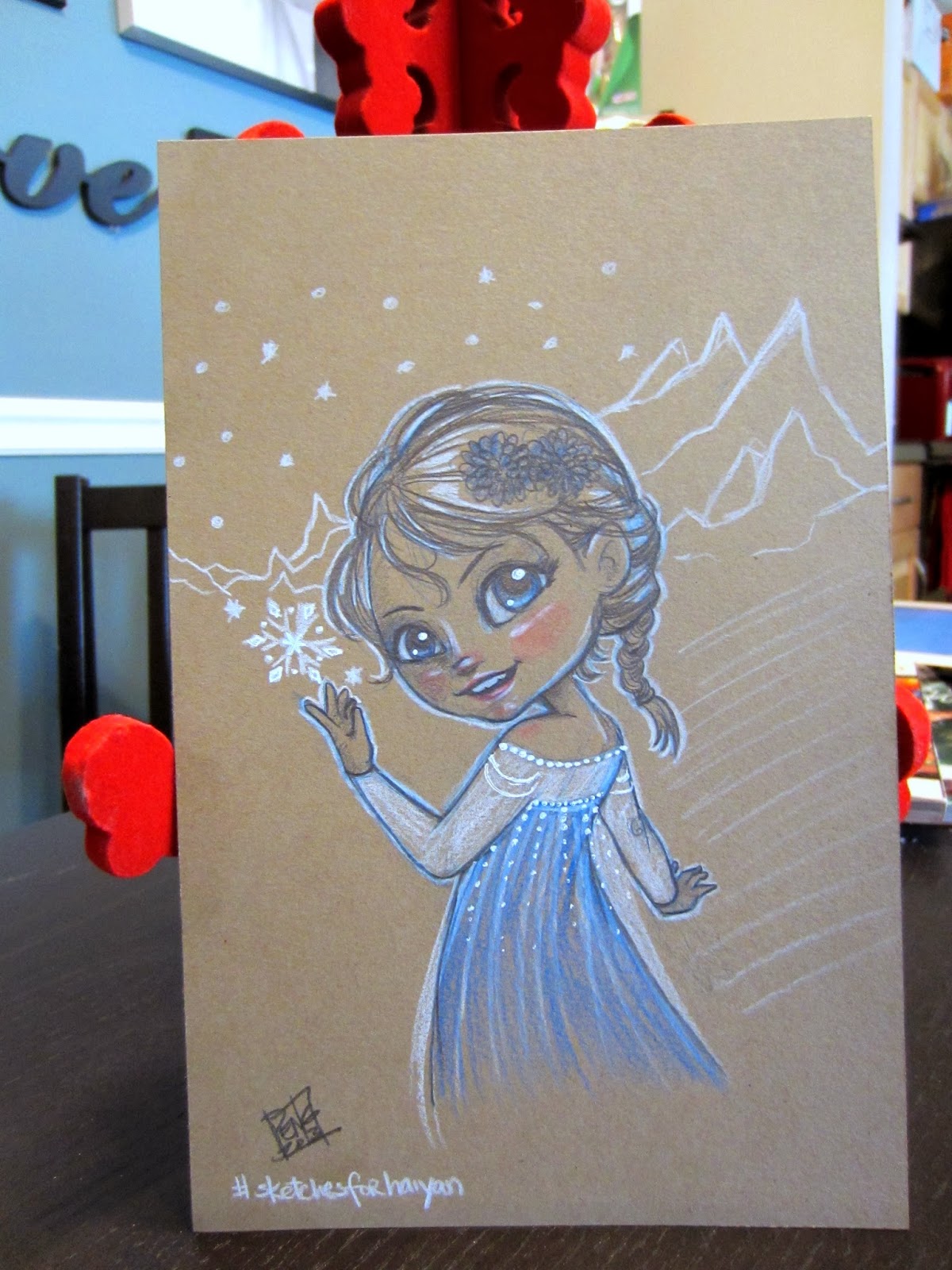 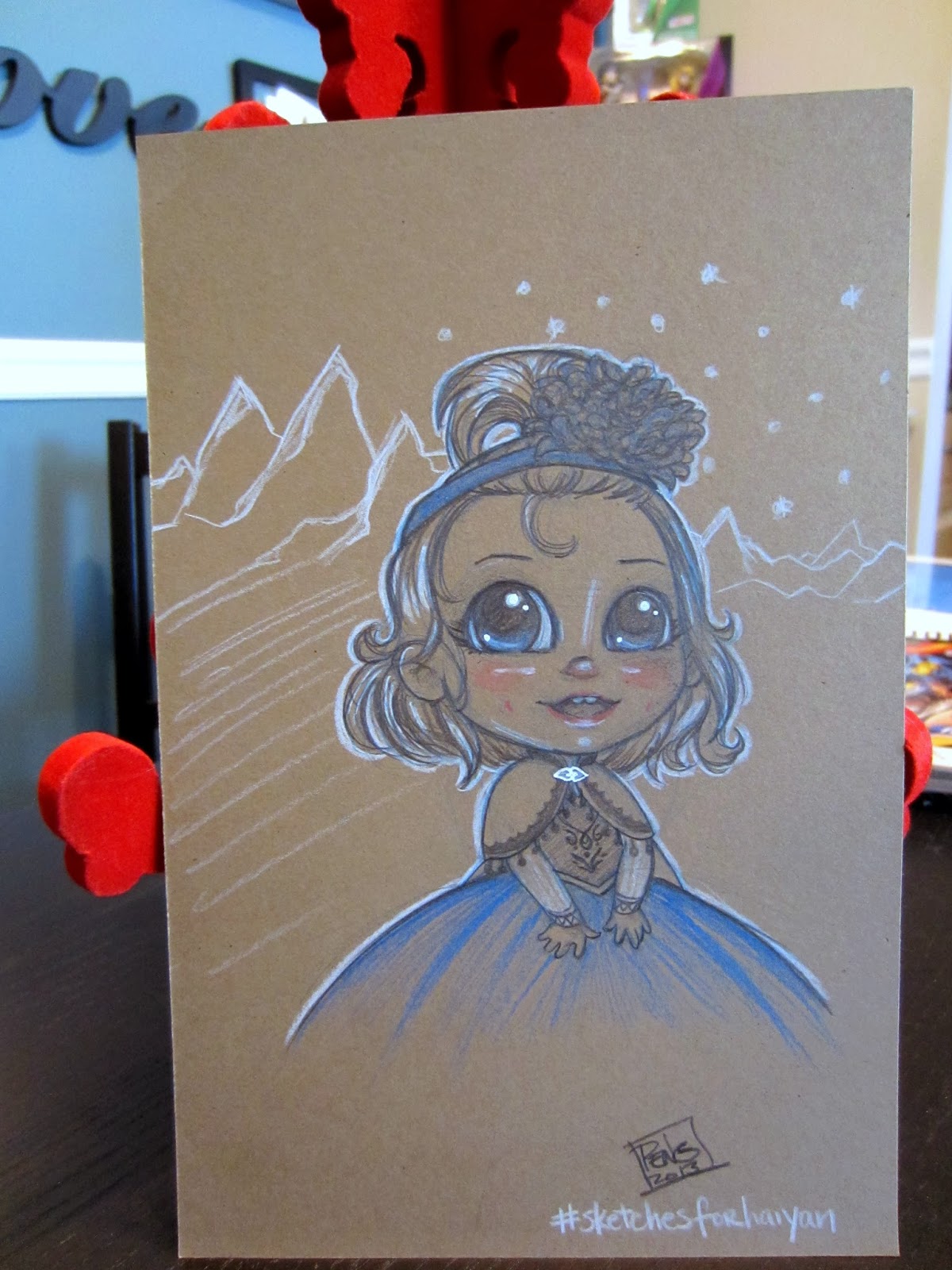 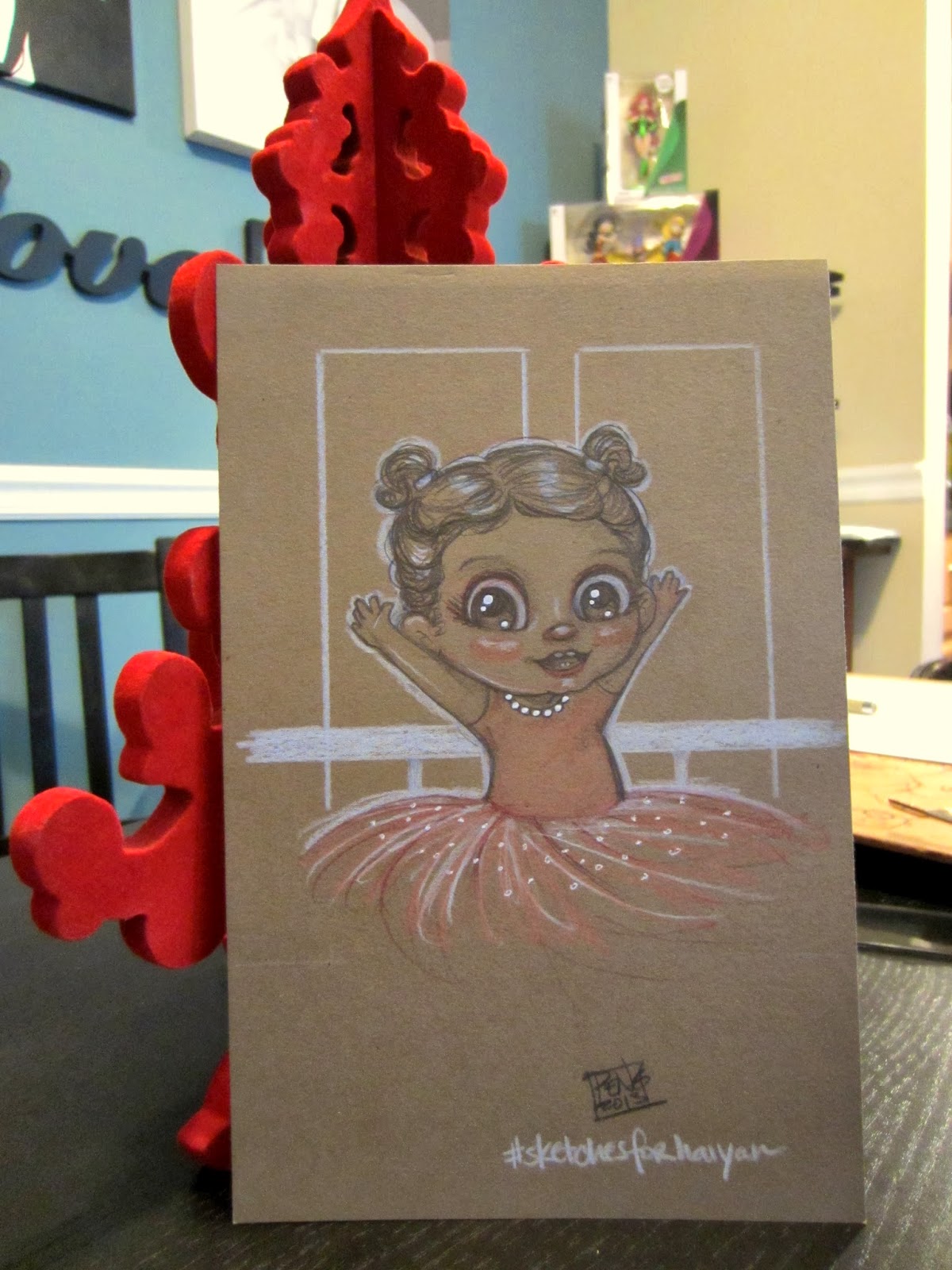 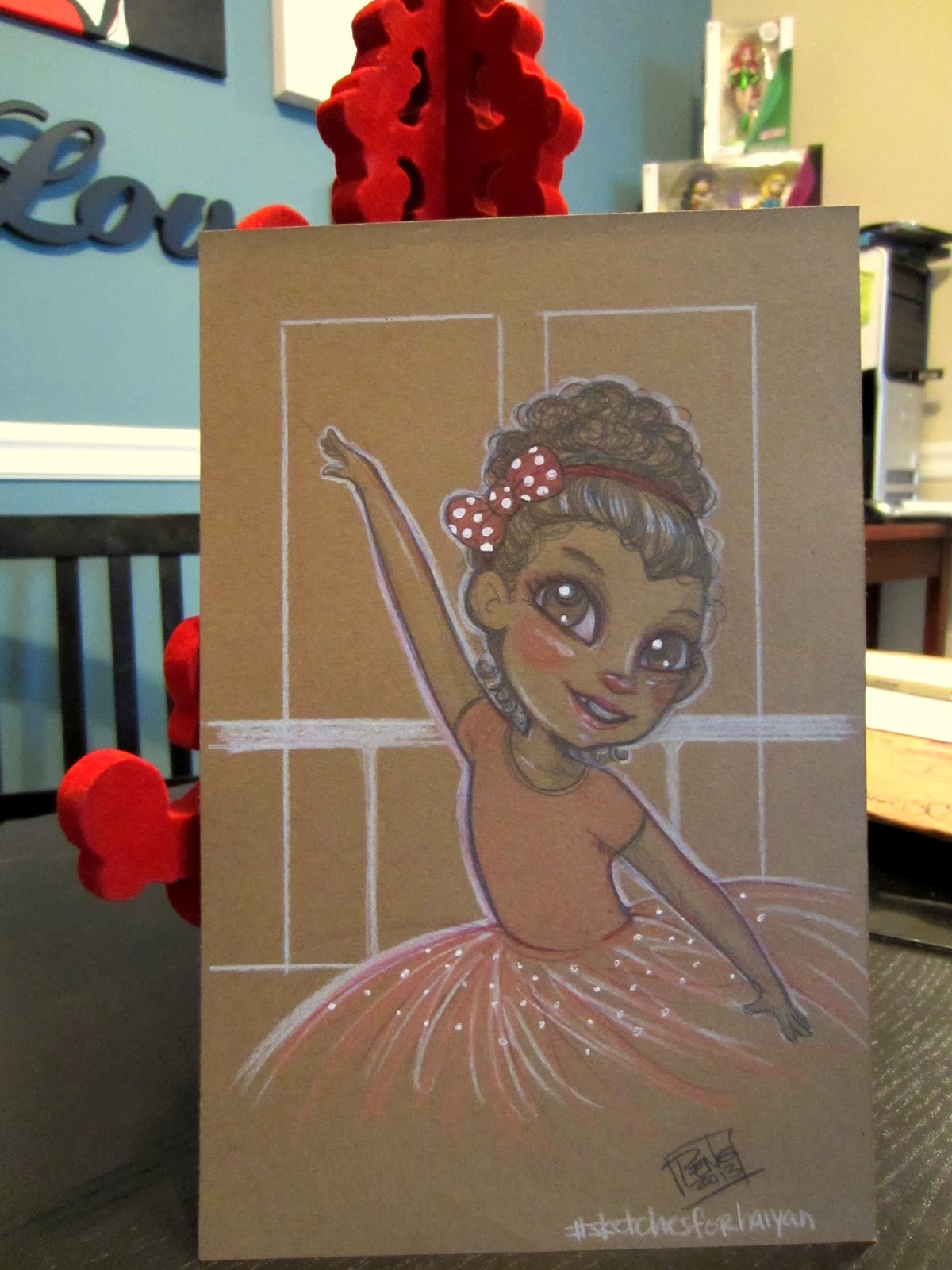 so i've decided that the title of my posts this year will be some word that is in the blog post itself. i won't be lame like using "THE" or "IS" cuz that means nothing. so today's post is MORE. cuz i got more #sketchesforhaiyan stuff to show! these are the rest of the ones i worked on. i had so much fun drawing these things that i may consider bringing this brown paper to cons to draw on this year.
i seem to have tapped into some niche that i didn't know i could do while i was drawing these sketches. i'm apparently pretty good with drawing people, mostly kids, with a cartoony look. didn't know i could do that! after i drew my first one, lots of folks took advantage of the sale and got one as christmas presents. and i gotta say, they turned out pretty cool! all of the ones above are of real people/kids. 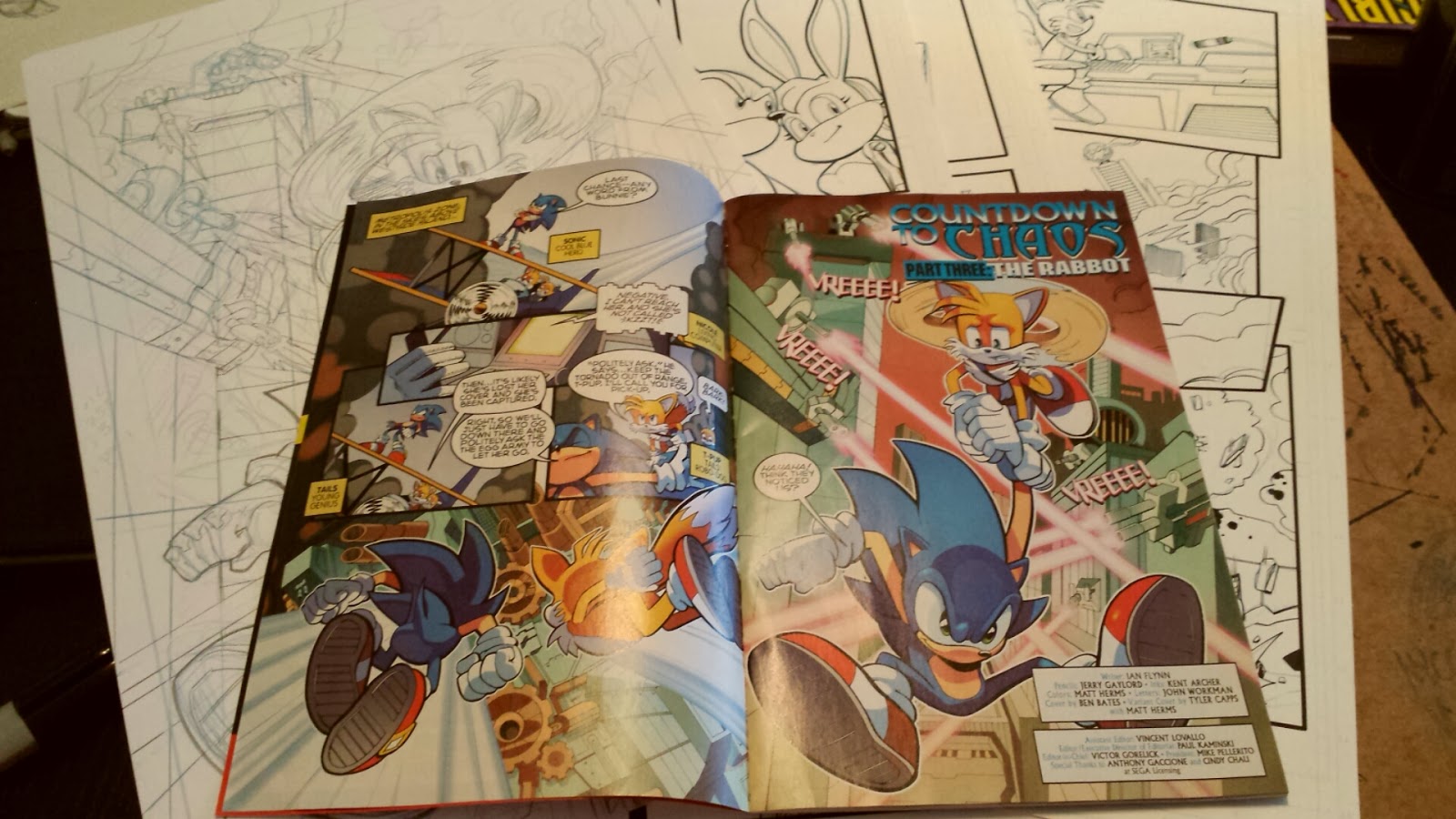 not that he needs any extra press, but i just have to give my boo theFranchize a shoutout! did u guys know he did a fill-in issue of Sonic the Hedgehog #255?! it came out last month but with all the hubub of the holidays and the emergency hospital stay, i didn't get to post about it. it's so amazing to see him draw a book of a character that i've pretty much grown up with. it's pretty surreal. it should be at local comic shops so definitely check it out. he's like the Jay-Z to my Beyonce'. =D
No comments:


jerry and i were on last night's episode of Comicosity's The Hangout! we were on there along with writer (and friend) Eric Esquivel talking about our new project LOKI:RAGNAROK AND ROLL mini-series published by BOOM! Studios. it's really tough to hear and see myself on screen but everything else about it is far more interesting and fun. be sure to listen and watch and also check out Comicosity.com. The Hangout ladies are always great to talk to. so much intelligent nerdly conversations. =)
thanx for letting me crash the party guys!!!

so it's 2014 already. not only that, it's well into January. i apologize for not having updated since before Christmas. if u follow me on twitter or facebook, u may have heard that my hubby had some serious medical stuff happen and was in the hospital for almost 2 weeks over Christmas and New Year. i'm not really comfortable talking about it in too much detail in such a public capacity. but he is doing much better now and we're back on our grind. the end of the year was really heavy and we've had to make some major life adjustments.
i've been focused on making sure he gets healthier so my online outlets have been neglected because of that. however, since he's doing better we've been able to do more work. we've even wrapped up the first issue of the new book LOKI:RAGNAROK AND ROLL published by BOOM! Studios. Jerry's drawing it and i'm inking over him again. we're joined by the talented Gabriel Cassata on colors this time and it's looking so so pretty. as a matter of fact, Jerry and Eric Esquivel (writer of "Loki:Ragnarok and Roll") will be on tonight's episode of Comicosity's The Hangout. and i'm thinkin about crashing it! (well, i guess it's not crashing it cuz they said i can jump in.) the episode should be posted on their website by tomorrow and i will provide a link to it on here. if ur already subscribed to the Moms Read Comics' YouTube channel, then you can catch us on it LIVE tonite at 9p. we'll be talking about the new book as well as other nerdy things for all our fellow nerds out there! 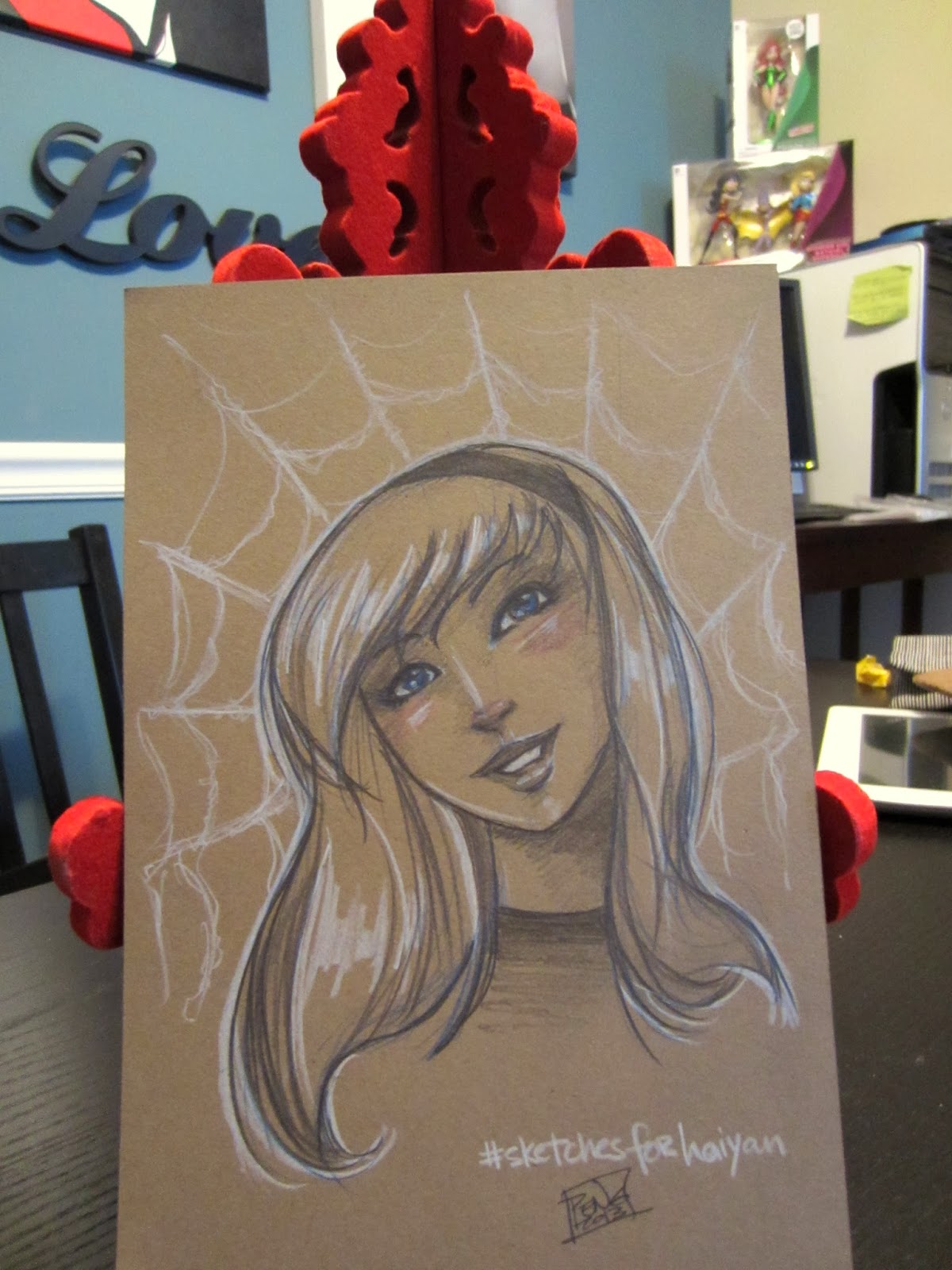 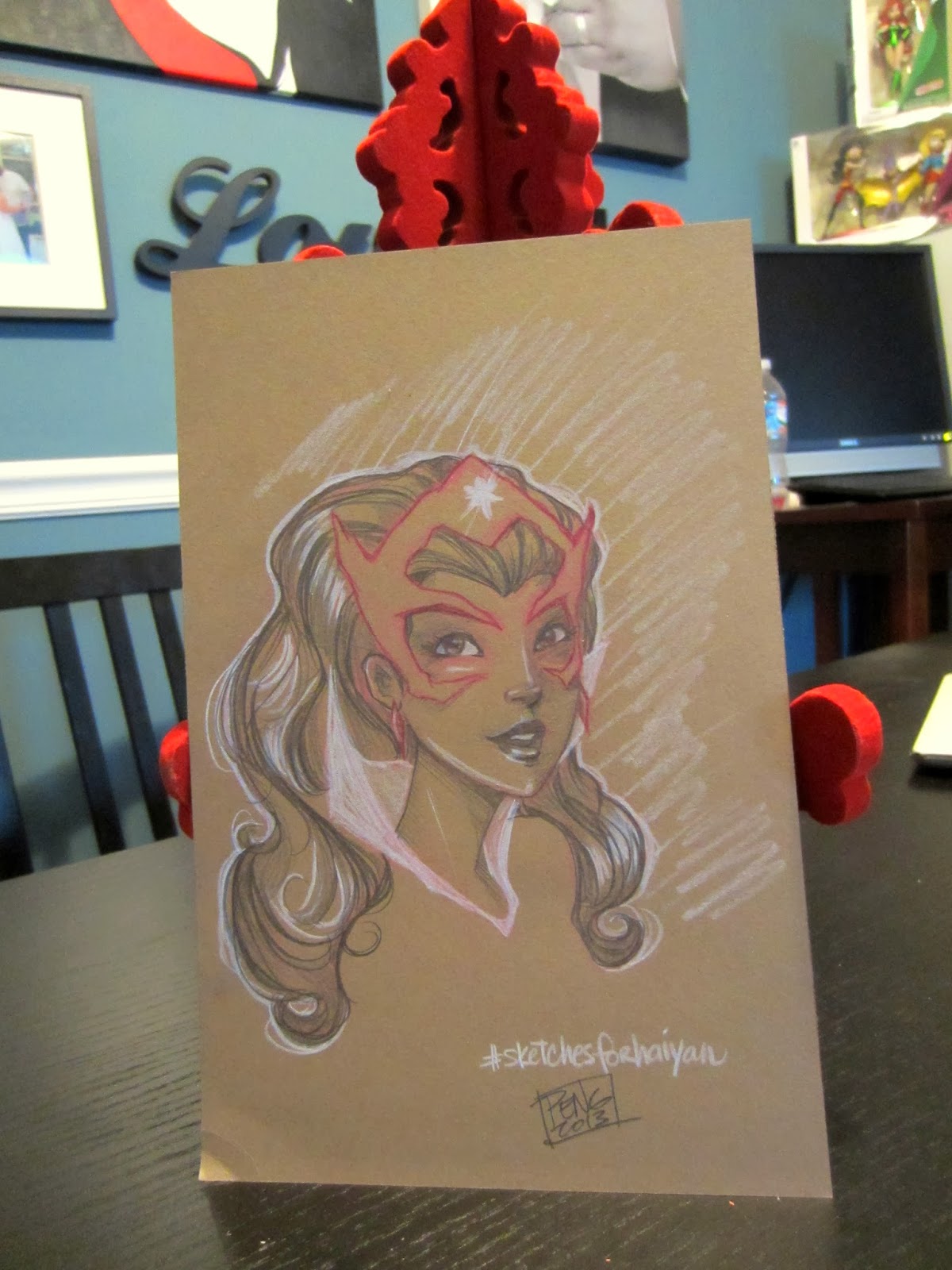 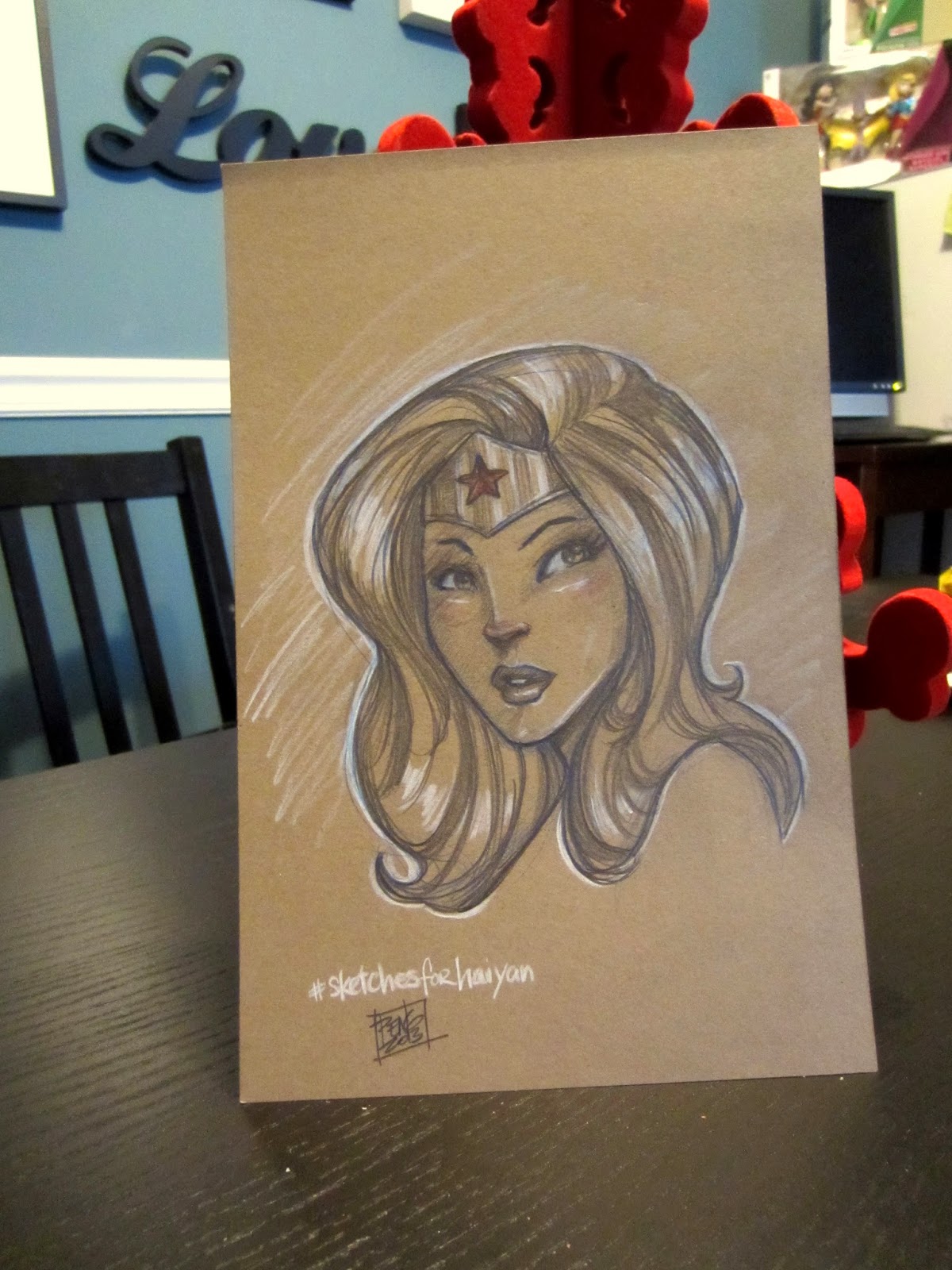 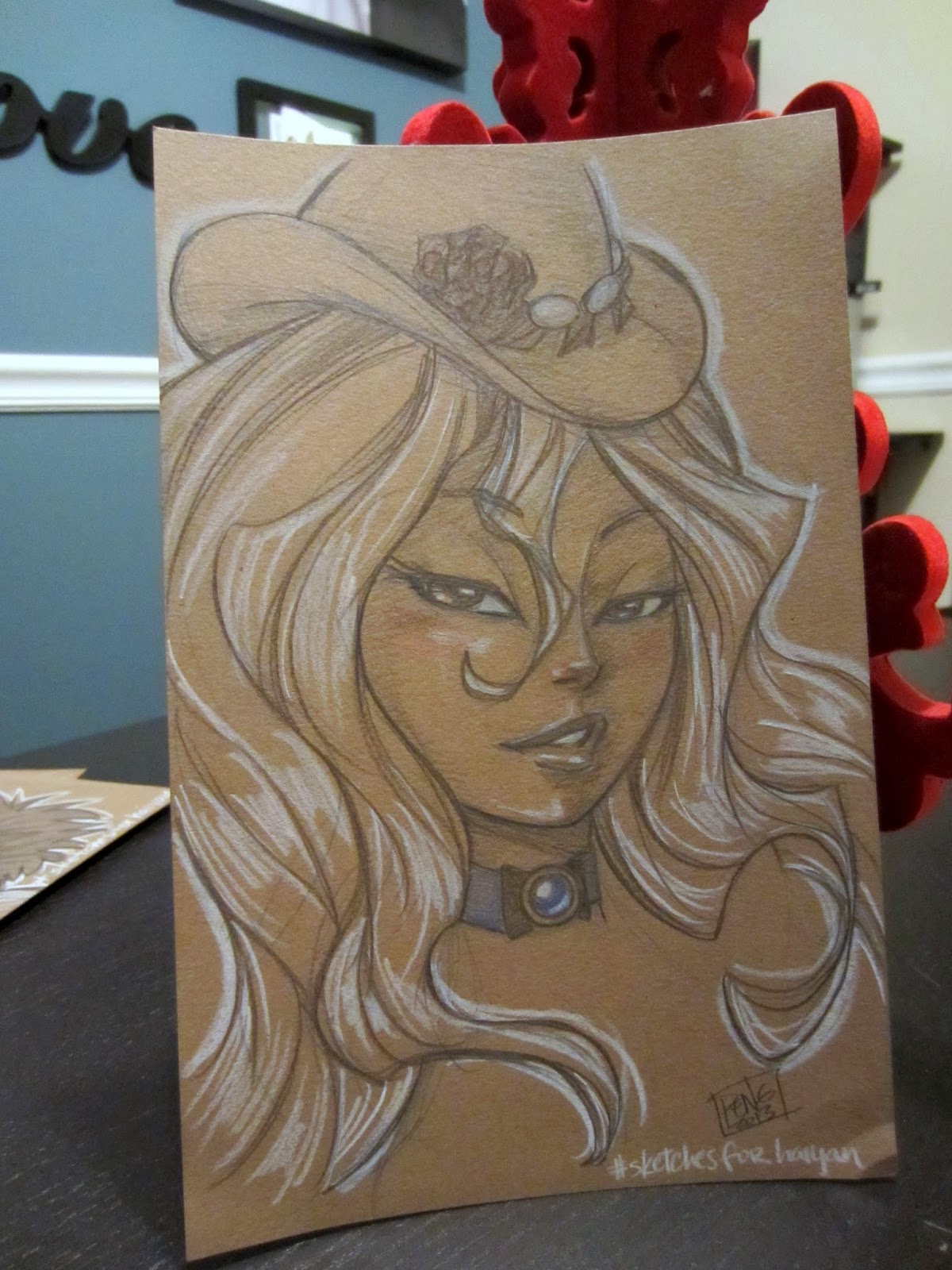 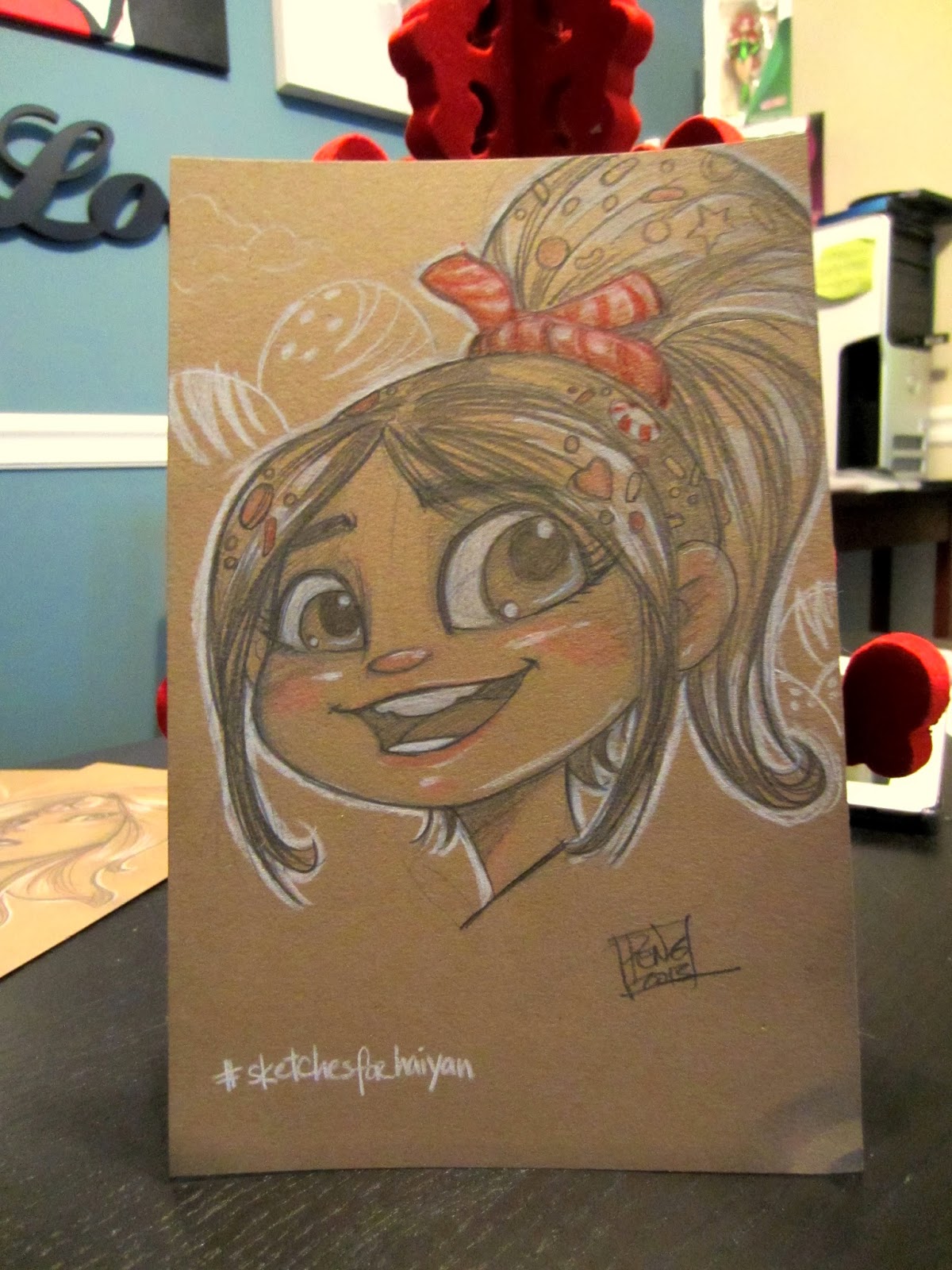 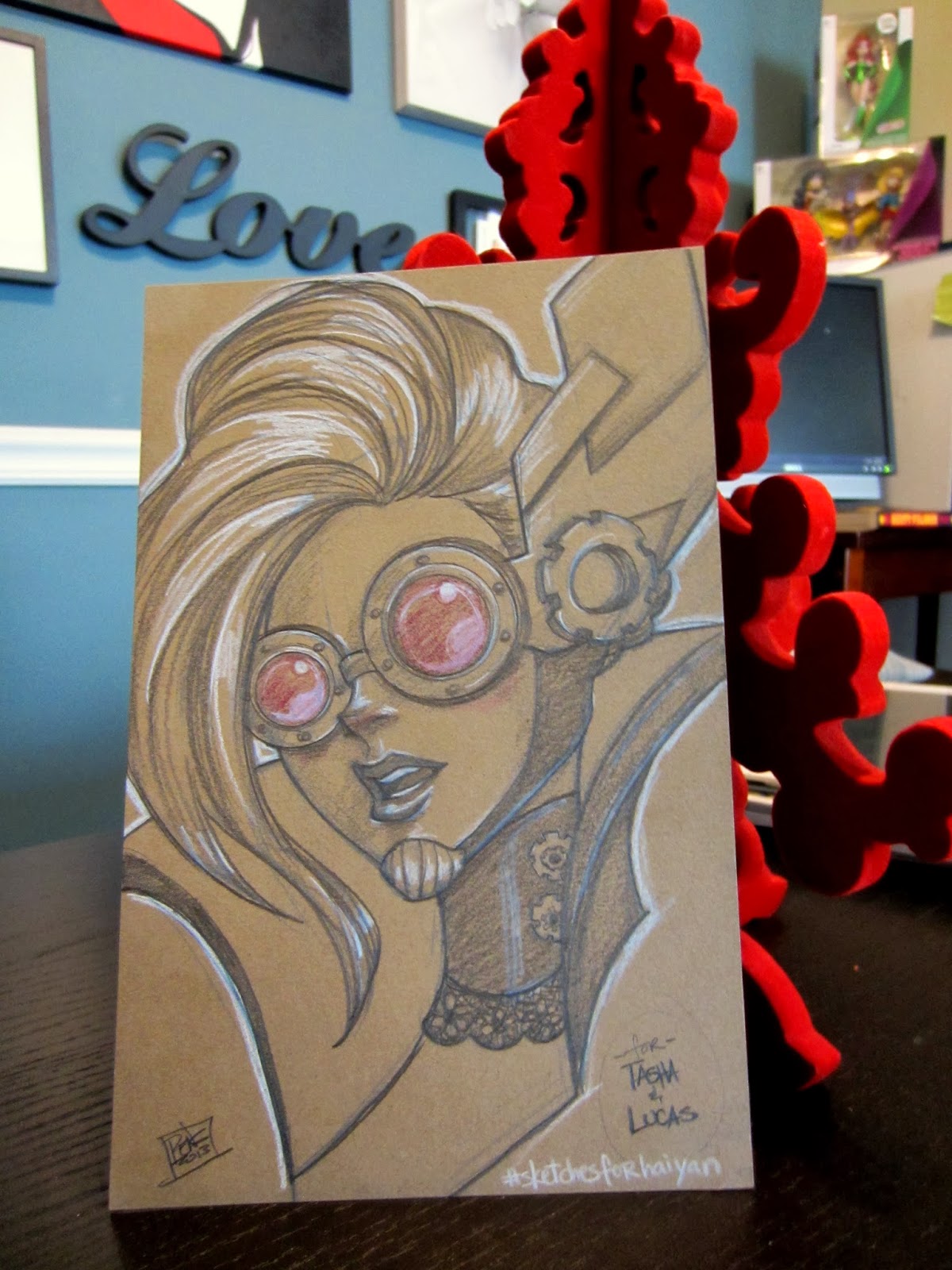 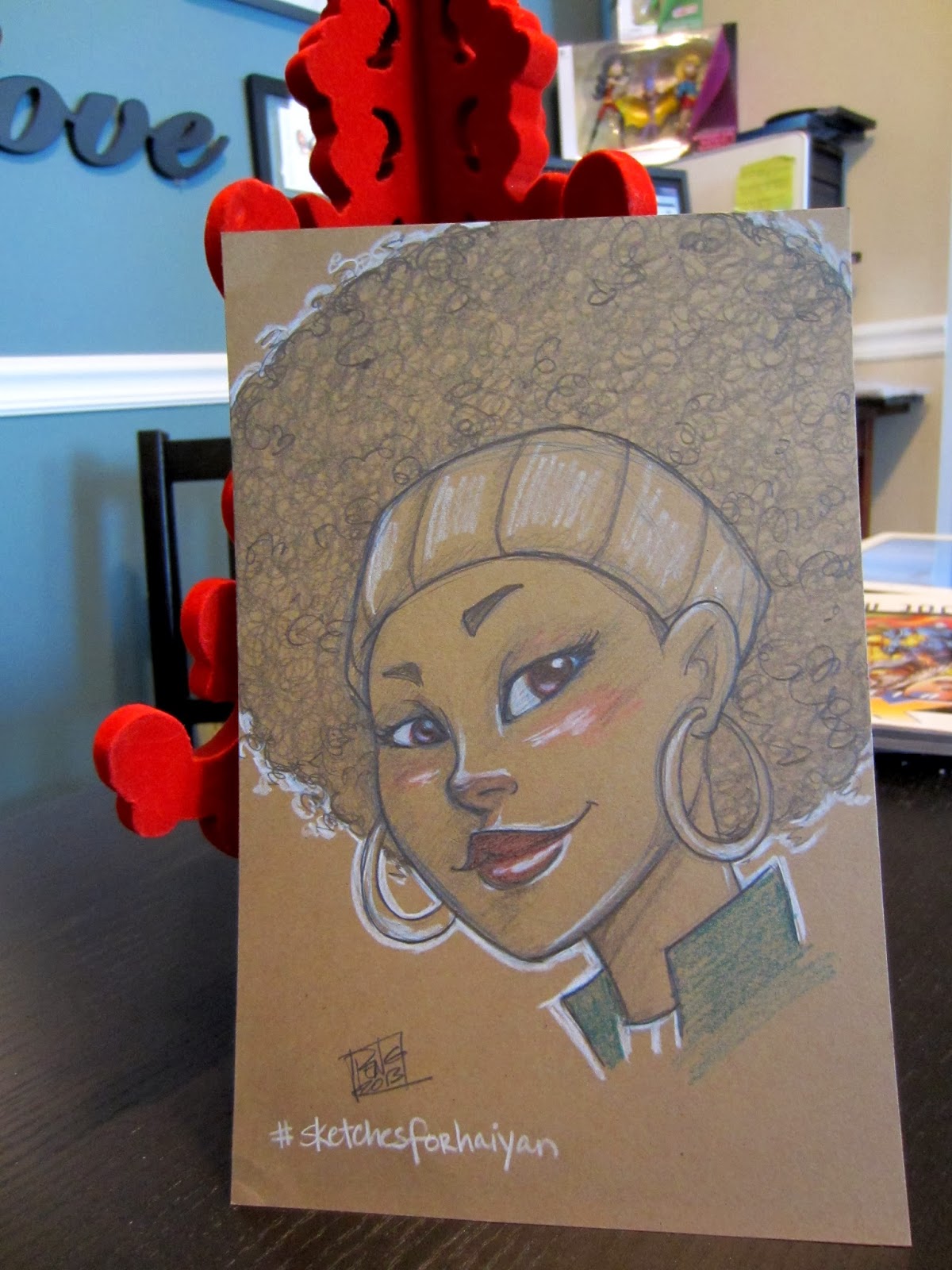 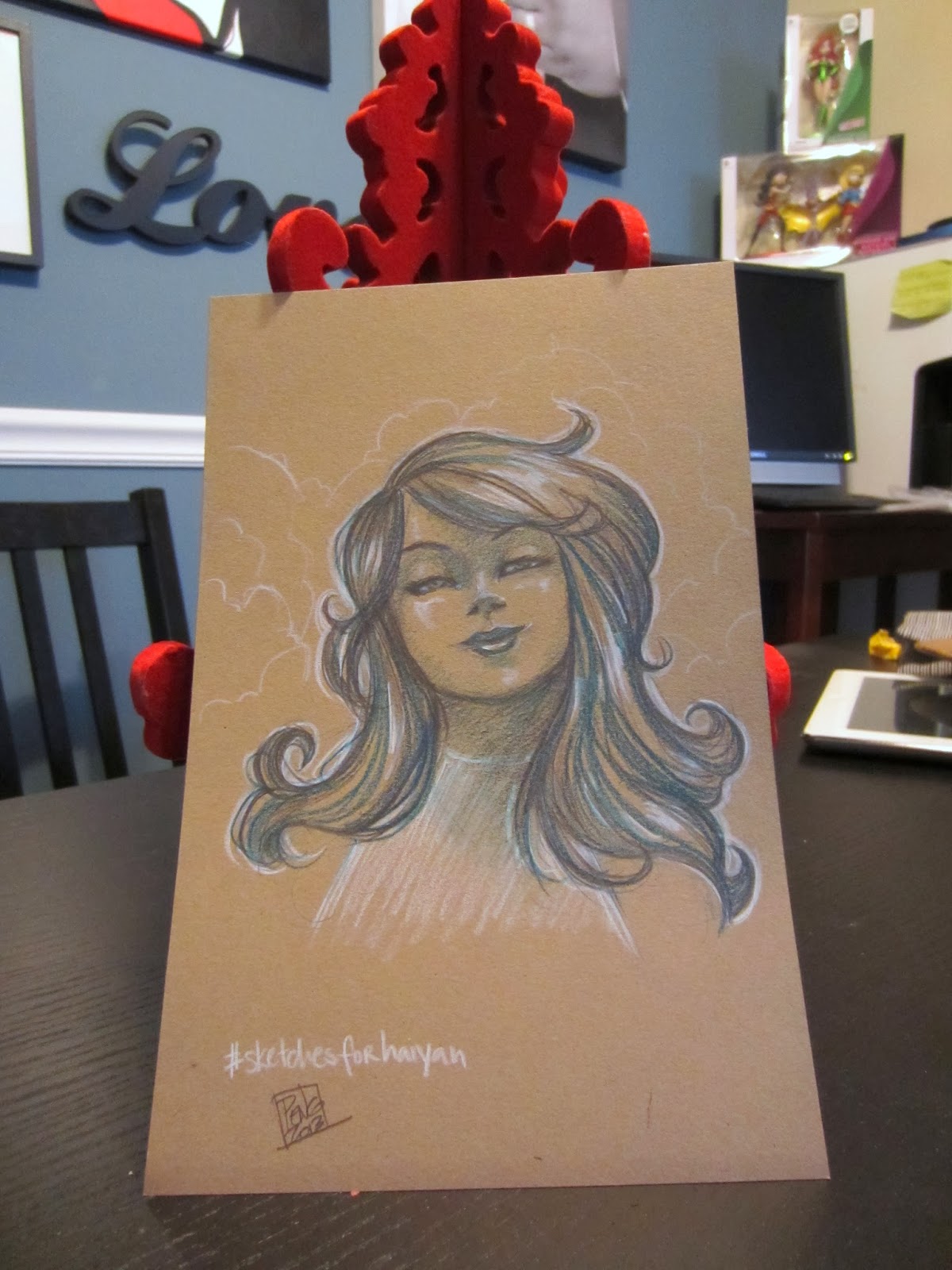 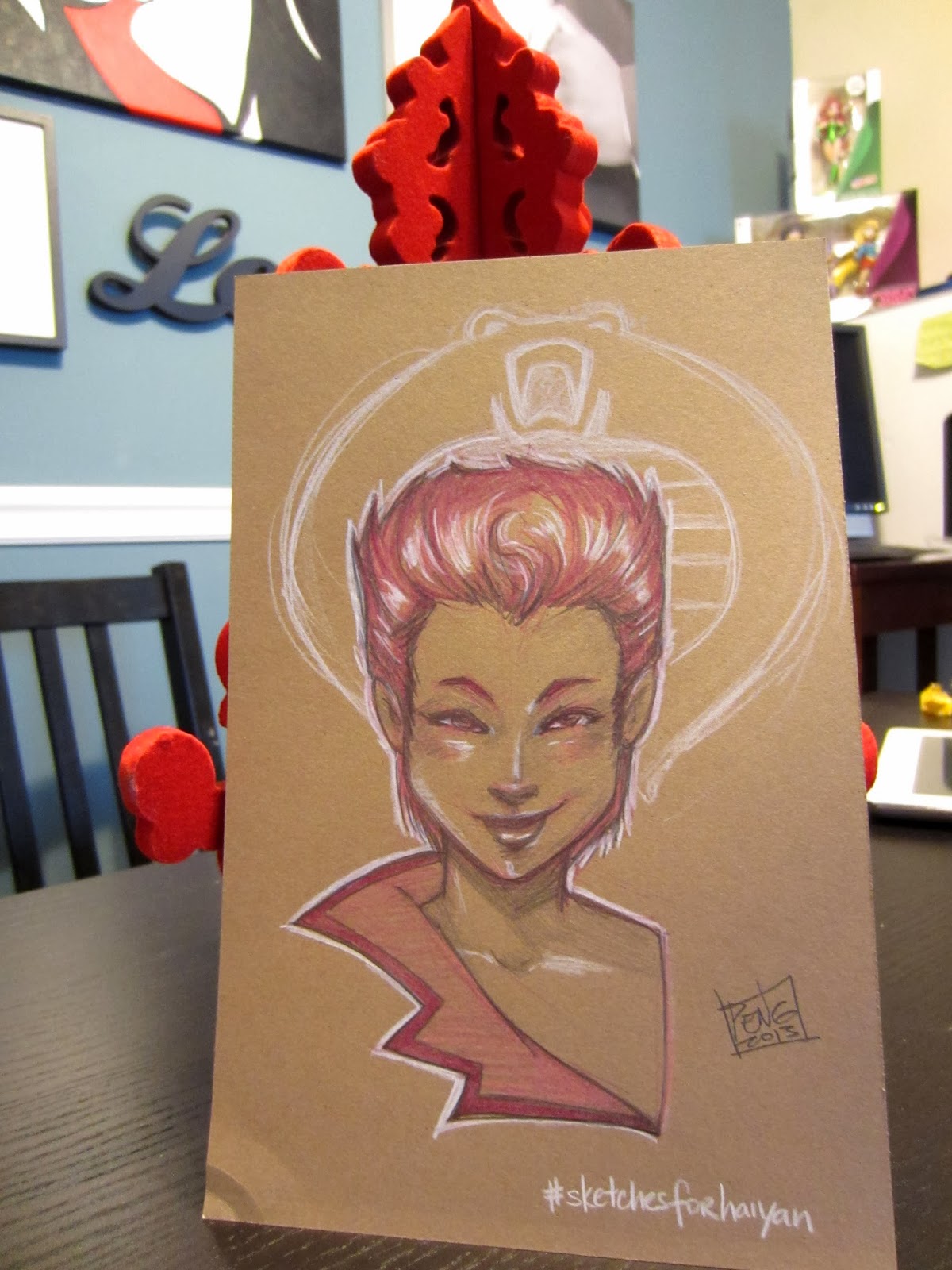 since i never got to post about it on this blog, here are some of the #sketchesforhaiyan that i did. did i tell u guys how flippin amazing and grateful i am for all the support!?! i had way more requests to draw sketches for u guys than my fellow studiomates. i know it's not a competition or anything, but if it was i would've totally won! ;P all kidding aside, thank you all so much for your generosity. together we were able to raise $776 from a bunch of $20 sketches! after shipping costs, we were able to donate $692.70 (or 29,807.50 PHP!) to the Philippine Red Cross to help the victims of Typhoon Haiyan! u guys are all heroes in my book!