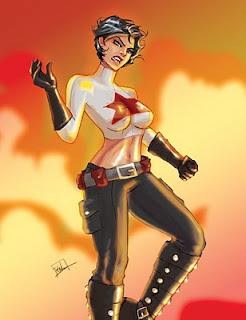 i did this commission recently for a return client. i've drawn a couple of things for her in the past, most recently the Harley Quinn with the diamonds. i guess she likes my stuff cuz she keeps supporting me. =P i can't help but be humbled with folks that repeatedly ask for artwork from me. i must be doin somethin right!
this commission is of her City of Heroes character "Zee." it was in exchange for her giving me another year of premium membership on DeviantArt. each time i need another year, i try to exchange it for artwork since DA is a community of artists and art lovers. and each time i've asked, folks have consistently stepped up and gladly exchanged services even though my fear is that they'd say "yeah, i'd really rather not." =P i'm sorry, i'm an artist. i'm sensitive about my shit.
at any rate, i really liked how the face turned out on this. i usually end up drawing faces with what i call "the magnum" which is basically a sexy pouty face. but recently i've been trying to break out of my comfort zone and draw expressive faces. it may not seem like a big deal to most folks but since i didn't get to really take good art classes in college, i feel i've missed out on some very basic art lessons like facial expressions. so it's a slow-going process for me and i'm always learning. with this face though, i felt like i really nailed what i was trying to get her to emote but without making her ugly. (that's also something i struggle with.) and i wanted to play with extreme lighting so i went with the sunset look.

in other news, the hubby took me to get TWO DOZEN Georgetown Cupcakes!!! i feel so very loved. i'm slightly addicted to them and since we had such a successful weekend at the expo, he felt we should celebrate it at least a little. i'm definitely freezing them and make it last for a while. so excited about putting them in my belly!
No comments: 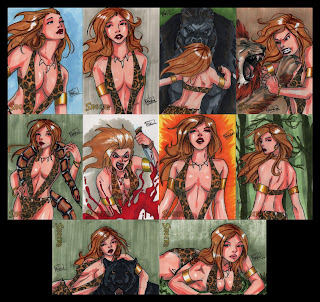 i do believe these Sheena: Queen of the Jungle card set from 5Finity Productions has already been released so these are all 10 cards that i did. it's apparently a very limited run so i feel very fortunate to have been asked to participate. however, i really pooped on this opportunity cuz i ended up turning them in a weeeeee bit late. and by that i mean i kinda missed the boat and by the time it got to them, they had already shipped the boxes of cards out. T__T it's crazy cuz it's probably the least number of cards i've ever done and yet these are the ones i turn in late. *sigh* it will NEVER happen again. during the time these were due, i just got so crazy busy and i had to ask for an extension as it was. at any rate, luckily they said they're still selling them as individual cards so they're still able to use them. i'm dumb. i hope they don't hate me now.

i'm currently working on a Manga Mandy set for them. i WILL get these in on time and i'm working on them daily. so yay! 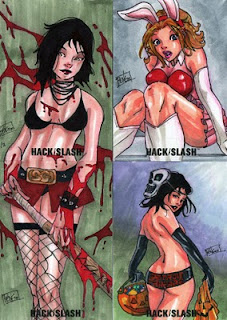 these cards i forgot to post. i finished them last month and i'm the idiot that forgets to post things on my own blog. =/ for info on each card, see Feb. 3, 2011 "eclat" post. he liked them so much he even bought the remainder of my artist return cards from the same set. i feel so loved!

quick update on me - we just finished all 3 pet expos for the year. SOOOO much fun cuz of all the doggies i got to see. but i am flippin tired! it was very successful for us at Big Heads Little Bodies Caricatures though. with these expos i really do believe that we can really bust some heads with these doggie illustrations. PLUS, as an added boost to my fragile ego, someone bought my display of the Chauncy poster i did. (See Feb. 10, 2011 "daedal" post.) i did think it was a little weird that someone would want to buy an illustration of someone else's dog, and i was a little sad to see it go cuz it IS of my baby girl after all. but i can't help but feel flattered that they liked it that much. they even bought the frame it was sitting in! O.O guess i'll just need to print another one for myself. =P

i am cooking up a nice story for ID Comics Studios' book The Brotherhood with the help of my studiomates. it's gonna be such a fun series. now to just get it out of my head and onto paper so the guys can start drawing it! i'll only be writing the series for the most part however i have been assigned to do a pin-up in every book so i'll still have art in there. i'm just not a sequential pages-type gal.

i've got an ongoing project to design characters for someone's original story they're cookin up themselves. i'm just waiting to finish this 3rd design and i'll post what i got so far. i've got 21 characters to design total! WOO!!

i am also working on putting together my first ever artbook in the next couple of months. first i have to see if i have enough worthy pieces to even create an entire book out of it. so keep an eye out for that. i'll be putting out teasers and things for it so i'm really excited about it. i hope folks are too. i'm trying to get them done by Heroes Con in June. keep ur fingers crossed!

in other news - my hubby theFranchize has released a teaser page for a project he's working on with Sean "Cheeks" Galloway! check out his blog at thefranchizelive.blogspot.com to see! i try not to boast much but it's just so neat to be married to such a talented person being a comic art nerd myself.

boy, after playing "words with friends" on my phone with my kid sis-in-law, i know that is a word i will never be able to play. there's no chance that those letters will fall into that perfect of a place. =P 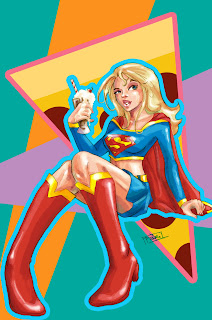 so it's been quite a while since i updated. after my last blog entry, things like deadlines and projects kinda blew up and i didn't have much time all of a sudden. not sure if that's due to bad time management or just the general alignment of things. either way, i haven't had much time to do anything non-work-related until this week. i managed to get a lot of projects completed and now i'm moving on to others. i even snuck in a nice long lunch with my artistically-inclined BFF jacy yesterday. all in all things have settled down and yet ........ it's oddly unsettling. i feel like i'm really forgetting to do something very important. i hate that feeling.

anyways, the image was my last month's cover for the Supergirl:Lost Daughter of Krypton radio show (episode #46) on PendantAudio.com. believe it or not, the pizza, the chocolate shake, and even the whip cream were in the episode! they didn't play any real part of the story - just that they were at a pizza place and Supergirl asked for the shake with extra whip cream. so i couldn't possibly turn down the opportunity to draw drippy whip cream as an overused innuendo. =P and all i could think about as i read that they were in a pizza place was "Peach Pit." so i just went with that for the bg. i think i accomplished it. and, if u could believe it, it WAS as easy to make as it looks! that hardly ever happens.

currently i'm making packets for myself and theFranchize to submit to San Diego Comic Con for Professional Badges. wish us luck! i hear pretty much half the country's gonna be there so there's no more badges of any kind unless ur under 12 - in which case there seems to be plenty! =/ if they don't accept us, i'm hoping that one our connections can help us with a badge so we can still go. gotta stay optimistic!
1 comment: