i just got back from Tidewater Comic Con and i wish i had time to post pics of sketches i did this weekend BUT i have 2 days to get ready for MegaCon this coming Thursday til Sunday! i have posted some of my favorites on my PATREON PAGE however so for my lovely supporters, u can check em out now. [side note - i think i'm gonna start posting these sketches to my PATREON PAGE during the convention, data network-permitting.]
so for MegaCon, all 3 IDSTUDIOS members will be there but they split us all up. sad face emoji. however, u can use the handy dandy map i've made to find us easily around the convention. i'll be in the Artist Alley - TABLE A201! i ran out of Superman & Wonder Woman prints and the Ariel print at Tidewater but i will have MOAR with me in Orlando. i'll have a few more of my prints, plus one new print of my little baby Rey pilot too! i'll be bringing books and doing sketches all weekend as well so i hope to see u guys out there! 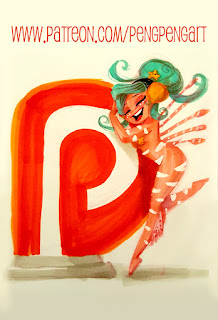 in the meantime, please remember to check out my PATREON PAGE and consider the support. i wanna share so much stuff with everyone!
No comments:


www.patreon.com/pengpengart
MY PATREON PAGE IS UP AND RUNNIN!
i've even got a nifty new tab UP TOP to get u there faster!
i done did it and launched my Patreon page last week. i know it's gonna start slow but i hope it can build momentum as time goes on. i'm really doing it because as an artist, i need the support of my fans and peers. not just financial support, but also like a cheerleading section! i can't possibly accomplish any of the stuff that i've done so far without people cheering me on and appreciating my art. why a patreon page though? well, i was going to be drawing more anyway but with patreon supporters, they'll keep me honest. because, let's face it, inspiration is nice to have when knocking out work but it's not a daily occurrence. and in return, i can actually share my art by giving it to those that appreciate it the most!
i'll be doing more sketches and character designs to bulk up my portfolio in the hopes that, one day, i'll be working for Disney in some capacity. dreams are all well and good but i'm old enough to know that dreams come with lots of hard work. heck, some Disney princesses gotta battle sea monsters or DIE before they can get their dreams to come true. i gotta be willing to do the same. but in order to do so, i need to be able to focus on it outside of the comic projects i work on with the hubby. as my patreon (hopefully) grows, i'll be able to do even more! then it's a team effort! and if there's one thing i know, it's that team work makes the dream work.
so head on over to www.patreon.com/pengpengart and watch the silly video i had to make on my phone*, read up on the rewards, and consider the support. i wanna work with you and grow together! i have never been more ready to get workin!


EXTRA INCENTIVE FOR EARLY SUPPORTERS!
for anyone that becomes an exclusive supporter on ANY level from now until July 1st, 2016, i'll be giving away a downloadable PDF file of my artbook from last year - DAYDREAMS Book 1. i don't have any more physical copies of this book. it's 36 pages full of sketches, pin-ups, and illustrations. hope u'll consider!

*small note about the video - pls don't be too harshly critical of my video. i really suck at video making and i can't stress enough how much i hate how i look & sound on videos. not to mention i recorded it on my phone which i'm certain can't be the best way to do it. but there ya have it.
No comments:

[listening to "california dreamin'" by the mamas & the papas] 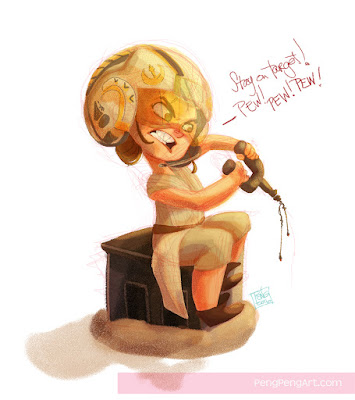 so i guess star wars nerds have officially taken over the entire US and even declared May 4 as Star Wars Day - "May the Fourth Be With You". and they're about to take over today as well with "Revenge of the Fifth" but that hasn't quite caught on just yet. so i went and just had to do my own little tribute for the day. i blame it on mob mentality or whatever. i may turn this into a small print for this con season, we'll see.

i wanted to draw a little kid Rey with her pilot helmet for a while now but never really sat down to do it. i just thought she was super adorable when she put it on in the movie. it was a very personal moment for her and it was like her little happy place. then when u think about how she had to raise herself for the most part, it's just so much sadder and special. plus, as an 80s baby, i definitely had my moments when i was a little kid make-believin i was a jet-fighter pilot helping Maverick. i mean, how can u not with Kenny Loggins tellin u to that u can?! so yeah, i can relate. minus the whole lonely child thing. 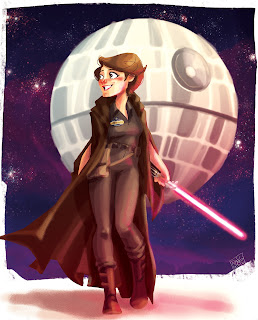 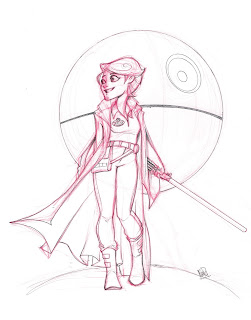 and as fate would have it, i just recently finished this Star Wars-inspired commission for a returning client. she's got one of the coolest jobs, in my opinion, where she gets to be a character on Disney Cruise Lines! i did one of her as a pirate lady before. but recently they had a Star Wars Day At Sea and she was dressed up as a jedi. i had to embellish a little on her costume but i really had some fun drawing this. and this is the first time i really liked my space drawing in the background. so that's a win for everyone!
No comments: