[listening to "the people" by common] 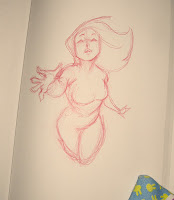 i was boosted earlier today after hearing "This is How We Do It" by Montell Jordan on my pandora radio. it's funny, i used to hate that song when it was popular, probably cuz the radio stations tend to play one song too much. now, it's not often that i hear it so when i do, it gets me goin.

anyways, thought i'd share what's on my art table today. workin on a sketchcard for a client. got the preliminary pink pencils on it, which is like half the battle for me. from here on out, it's easy-peasy. =P the rest of the images were warm-up sketches i did before drawing the card. just like with any warm-up exercising, it helps to do these to get me in the right mindframe for the task.

with these warm-ups, i was focusing on getting better at drawing butt-shots. i think i only just came to the realization that my modesty hinders my ability to look at certain body parts. namely crotches and nipples. which is why i try to avoid drawing those things in detail. but its all anatomy, right? so i should get over it, no? anyways, its a process and i'm trying. still makes me blush when i have to stare and draw those parts. all i know is that my idol, Olivia, isn't afraid of it. i imagine she'd tell me to man up! =P

the last sketch is me working out something else that i'm really struggling with - foreshortening. sigh.
1 comment:


these are on my art table today. SUPER excited about the Fanboys Vs Zombies graphic novel. i think it just came out last week or so and we only just picked it up from our favorite comic shop yesterday. it's the first 4 issues collected in this graphic with the Humberto Ramos cover from the first issue. it's really kinda surreal to be a part of a graphic like this, but i could totally get used to it. =P so go grab a copy from ur local comic shop and get caught up! OR u can order it from Amazon too -
http://www.amazon.com/dp/1608862895/ref=cm_sw_su_dp (if the link doesn't work for some reason, just search for it. pops up first.)
also, i guess they're releasing a new set of Sailor Moon mangas that should be better translated than what we got back in the 90s. it's thanks to Sailor Moon that i even got into anime (and my BFF for introducing me to it). i'm hoping that with these new better versions of the mangas, that they may re-release the series on DVD/BluRays again. cuz even though i was enthralled by the DiC production of the tv show, i was all types of blown away when i found out how much they completely fuddled with the actual show. of course, this was when anime stuff was only just starting to make its way to the US mainstream tvs. if i tell kids these days how we used to have to trade VHS tapes through online bulletin board systems (BBS) to watch new anime series, i'm pretty sure their minds would melt.
anyways, they also just came out with the Sailor V mangas which, if i understand correctly, was never released in the US. (don't quote me on that though, that's just what i read on the internet.) my old teenage self just got giddy again. 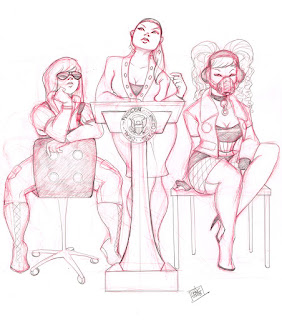 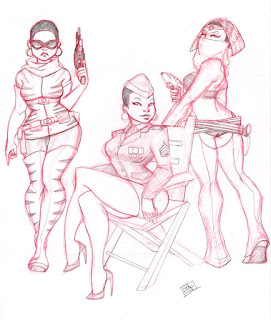 these are recent commissions i finished for a repeat client. these character designs are all his, i just put pencil to paper. =) "your will, my hands." (hundred cool points go to whoever knows what that quote is from.)

as far as the title of this post, i'm just feeling very behind on my personal projects. i was going through some emotional artist blocks last week and i have yet to do some of my personal projects. of course, it doesn't help that i can't seem to wake up before noon or go to bed before 3:30am lately. if i were on the west coast, this would be perfect. but seein as how i don't, my internal clock is just flipped upside down. goal this week - put a dent into these personal projects.
No comments: 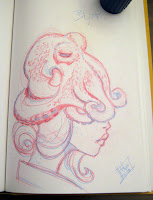 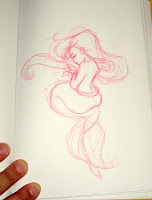 got lots of stuff done today that i have been meaning to all week. u may notice that i finally have a proper working twitter feed widget on the right. and if u scroll all the way to the bottom, i have my Instagram widget down there. i know most people probably don't scroll all the way to the bottom, but for those that do, there's a nice treat for em! =P

i swear when u work from home, time flies completely differently. i guess it doesn't so much "fly" for me as it does "meld." cuz i have no idea what day it is most of the time. it's just i get up, do work, play some late night CoD (call of duty), sleep, then repeat.

anyways, on one of my self-imposed official days off this week, the hubby and i did a Disney doodling day. we were supposed to doodle whatever disney film we turned on, starting with Mulan. but he was being uncooperative and decided to draw other disney stuff like Darkwing Duck and moved onto Superman (cuz that's his "default setting"). and tho his darkwing duck stuffs were pretty great, he still cheated! i started with Mulan, then moved onto some Little Mermaid (cuz i think that's my "default setting"). there are a bunch of other sketches in there too that were from warm up sketches. the octopus lady actually just started out as a study of octopus (cuz i wanna learn how to draw those funky tentacles) but the lady somehow ended up underneath. i have no idea where its from except i probably saw something similarly-themed on deviantart. but i don't really know for sure. i may take it a step further and do actual colors on it at some point.

and yes, i sketch with red and blue pencils. no real reason except that i just see it better.
1 comment:

confused about what, u ask? just life i guess. but i don't wanna bore u with that nonsense. everybody feels that way sometimes at some point, i'm sure. and knowing that, then i know i'll get over this hump at some point too.
but enough about that, here's some art! these were part of my holiday sale. the Devil Girl is a character from Tom King's "A Once Crowded Sky" novel that he commissioned. i did a black and white commission for him before at a past convention and i'm glad he decided to get another from me. the Redwing character is someone's original character and design that won my ebay auction.

[so this year i've decided that my post titles will be one word that describes my mood that day. i guess after a while i'm gonna have to be more clever than "tired" or "sleepy" cuz i don't think i can have two posts with the same title. =P]


HAPPY NEW YEAR ALL! 2013 is here and most of the world survived like 3 apocalypses last year! the actual first day of the year i spent with my nose to the paper finishing up the inks for Fanboys Vs Zombies issue #11. so today is my actual first day of the year. i'm really hoping that 2013 is going to be HUGE with more possibilities and better opportunities, both professionally and at home. i've been so fortunate to have fans of my work and people that are actually excited to see me and my studiomates at cons this past year. i will be working to get even MORE people to pay attention to my work.
with that said, did u know i did an exclusive cover?? cuz i TOTALLY did! BOOM! Studios, the guys that bring you "Fanboys Vs Zombies" and "Adventure Time" comics, has just come out with a new comic series "Adventure Time with Fionna & Cake". i was asked to do an exclusive cover by the super cool guy (Ben) that runs Awesome Cons here in MD for Issue #1. i did the line art and the colors were done by the very talented Kassandra Heller. i had a ridiculous amount of fun drawing this. i even had to do research by watching some Adventure Time. gotta tell ya, BEST research i've ever done. ever. i didn't wanna stray TOO far from the art style so when i mashed it with mine, it ended up lookin anime-ish IMO.
Ben suggested i use a Kill Bill poster to inspire the piece so this is what i came up with. the black bar (which u can see in the inks) was in the Kill Bill poster but i sent the editor one without the bar as well, in case they felt it was better without it. i left space up top because i thought the logo was going to be up there but they ended up putting all that info on the back instead. (book is written & illustrated by Natasha Allegri.)