[listening to "i wanna sex you up" by color me badd] 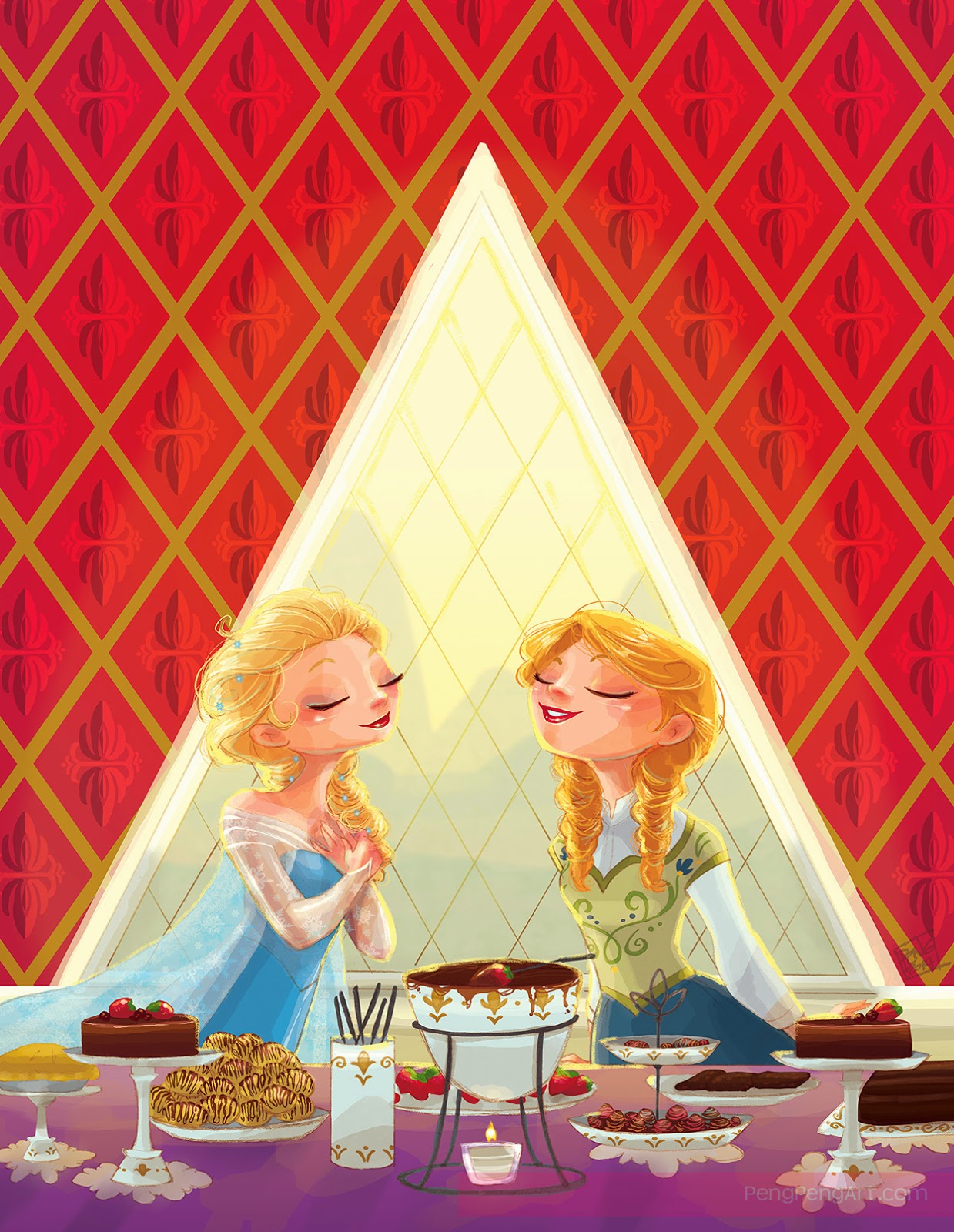 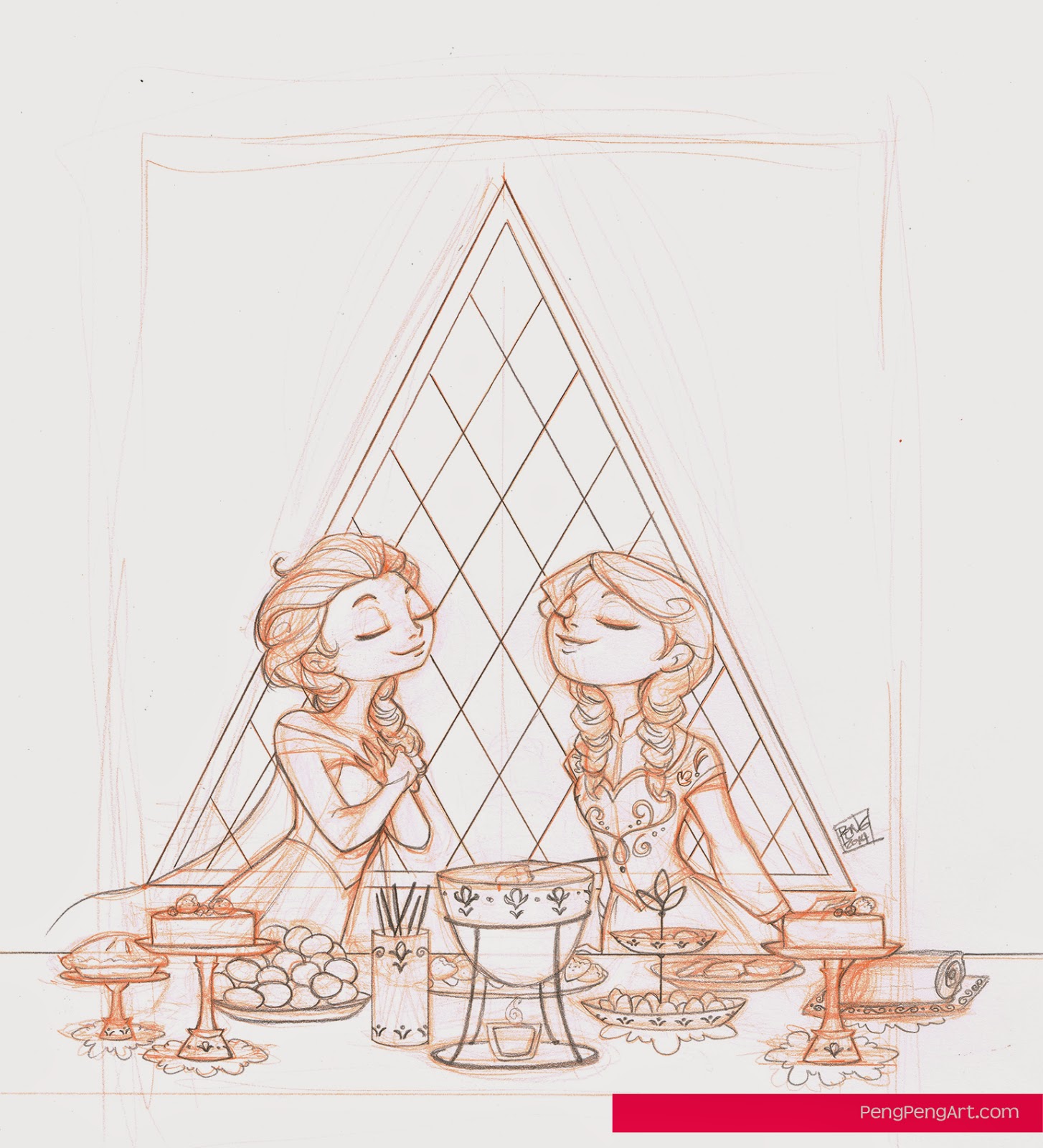 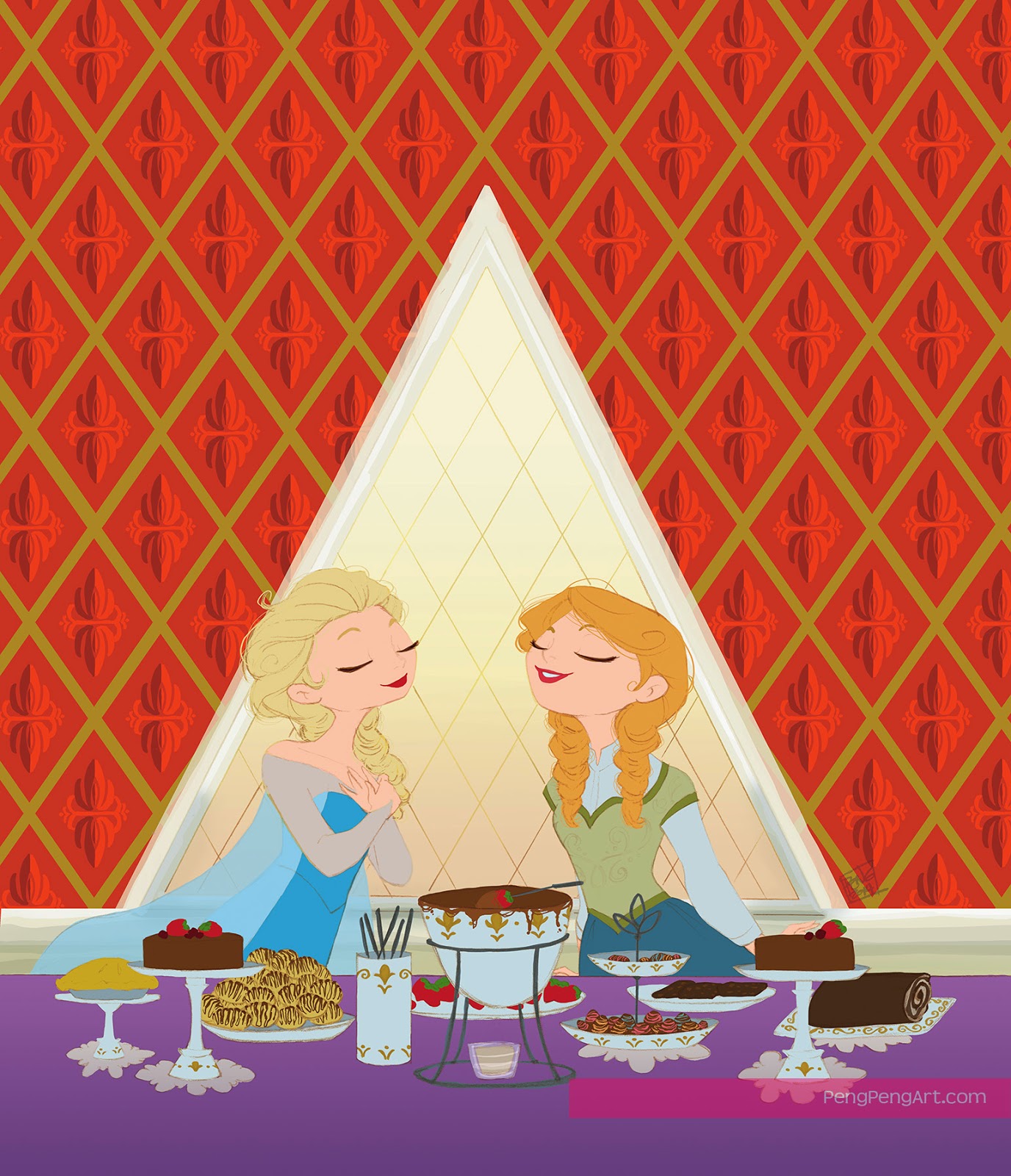 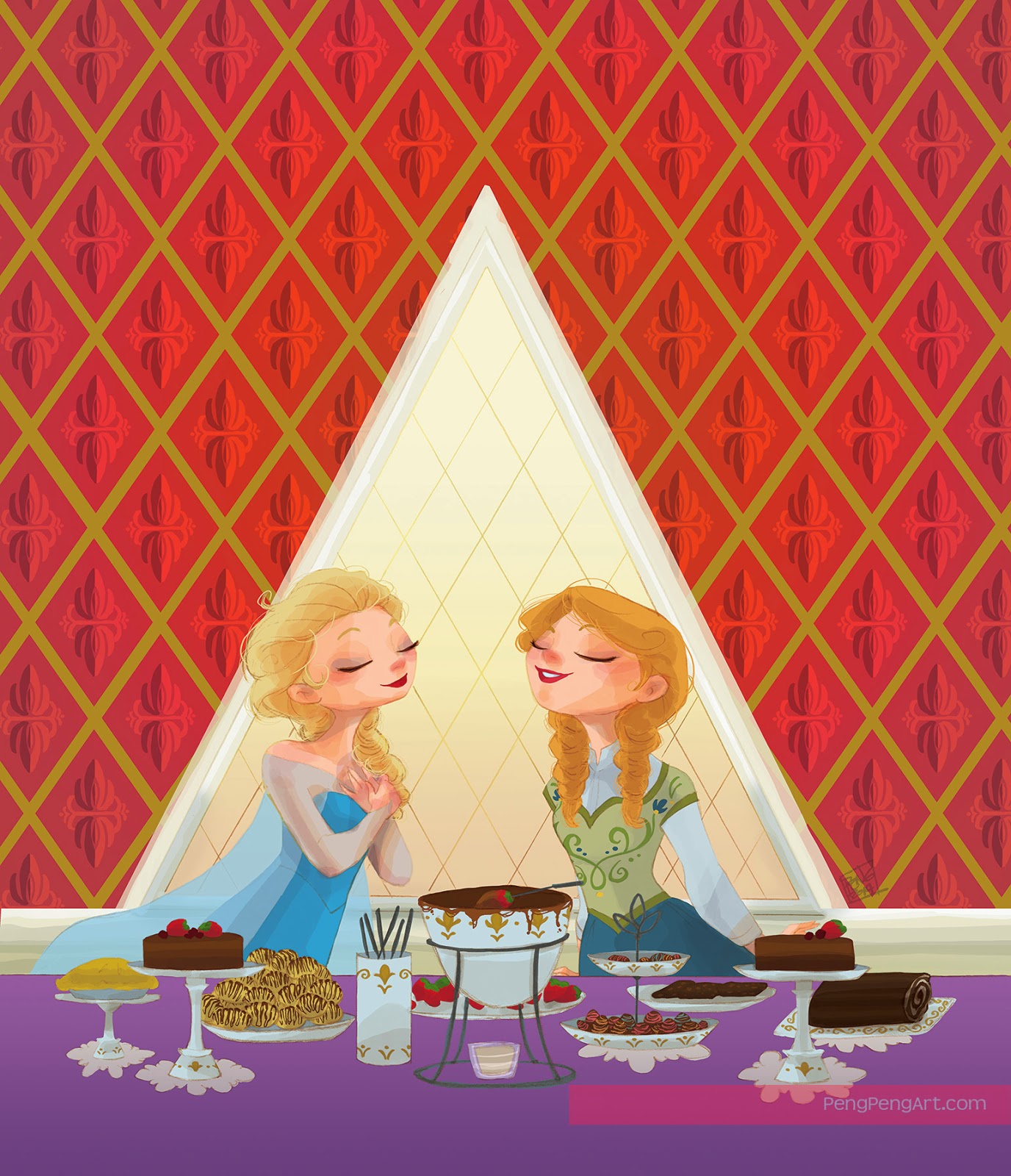 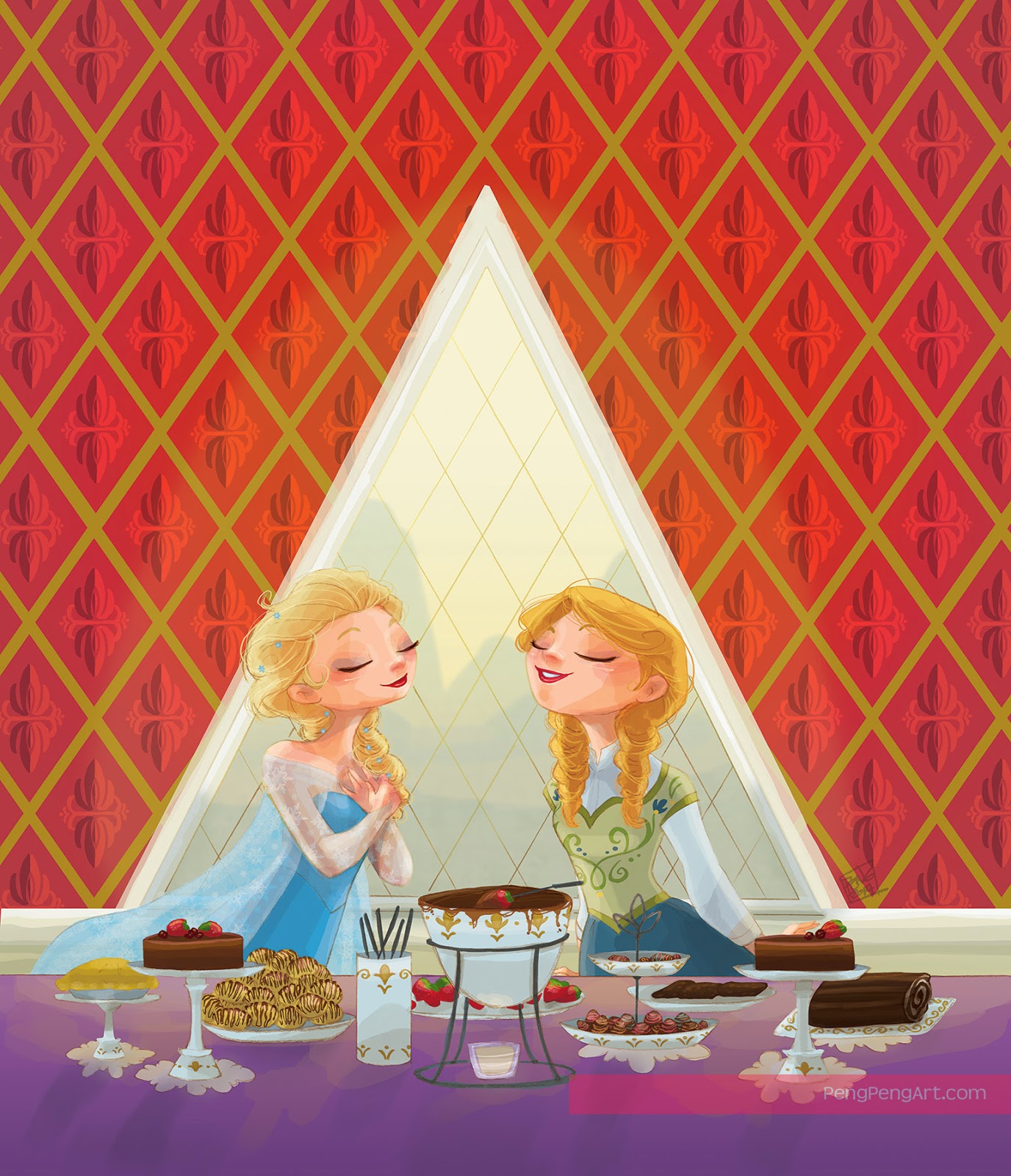 well, we just wrapped up the Baltimore Book Festival this past weekend which kicks off the whirlwind of cons/shows. every weekend from now until November, i will be doing a con or something like it. i'm tired just thinkin about it.

i did buckle down and actually finish a brand new print in time for these cons! i needed to do a Frozen print. i had to! i love the movie too much not to. next on my list is the Little Mermaid, but i think that's gonna have to wait until 2015. decided to do one of post-angry snow queen where the sisters can finally share their love of chocolate. hope folks like it!

unfortunately i won't have a new sketchbook this year for NYCC. there's just not enough hours in the day. but i promise there will be one in 2015. so help me!

this weekend, we're heading out to Awesome Con Indianapolis! i can't stress enough how much i love Awesome Con DC, so when they invited us to come out to Indy, it was kind of a no-brainer. it's the first time they're going out there so i have no idea what to expect. i just hope the crowd is hungry for cool prints and fun books. i don't know what our table number is, but i'm sure if u walk around, u'll find us.

shortly after that, we'll be heading out to New York Comic Con! come out and see us in the Artist Alley - tables O14/O15! (that's the letter O, not zero.) i probably won't have time between those two shows to post again so i hope folks follow my instagram (@p_e_n_g) and twitter (@peng_peng) to see all the sketches and stuff i'll be doing while we're on the road. haven't done a good huge con in months so i'm pretty excited about these.

cross ur fingers and hope we survive these next few weeks!
No comments:

[listening (and singing) to celine dion] 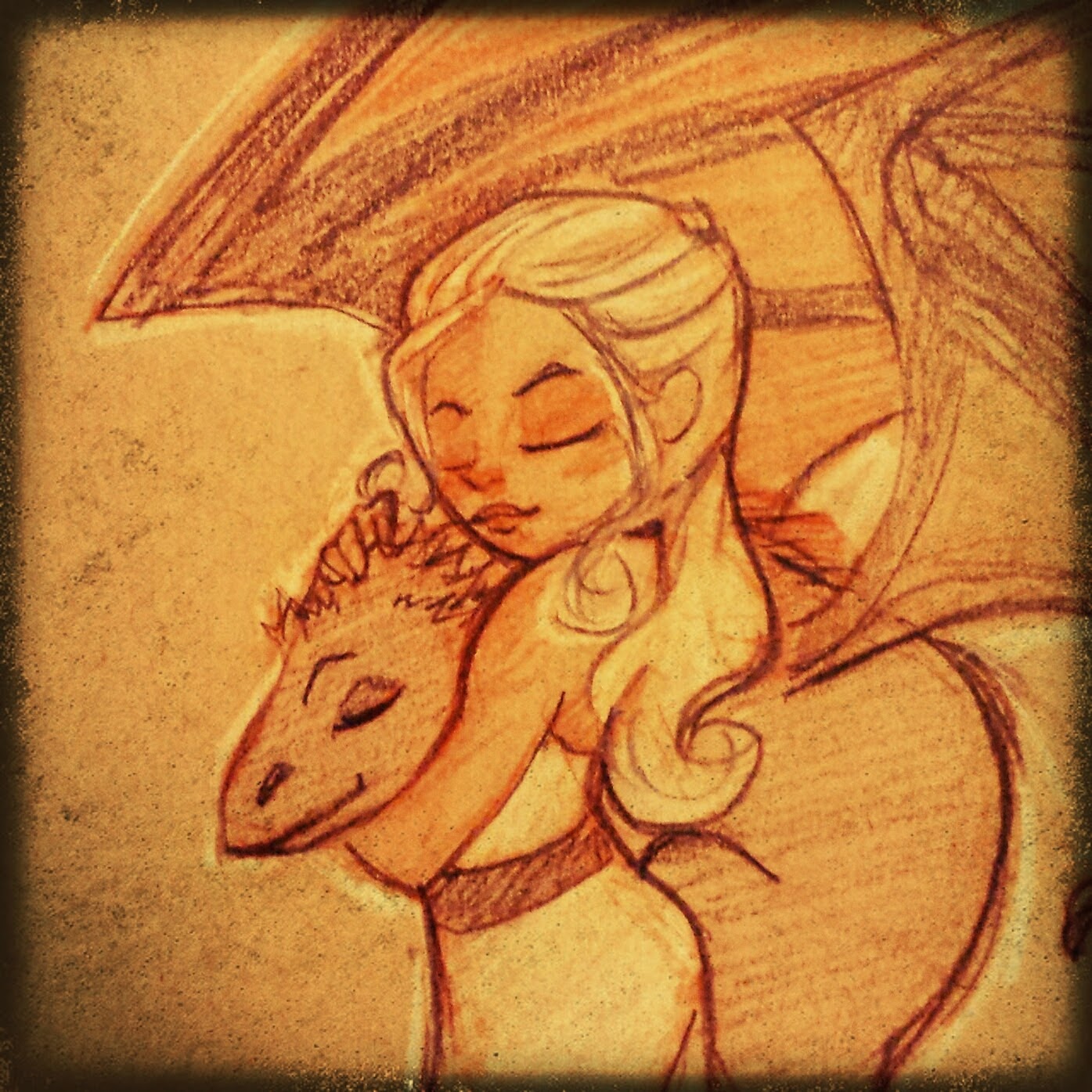 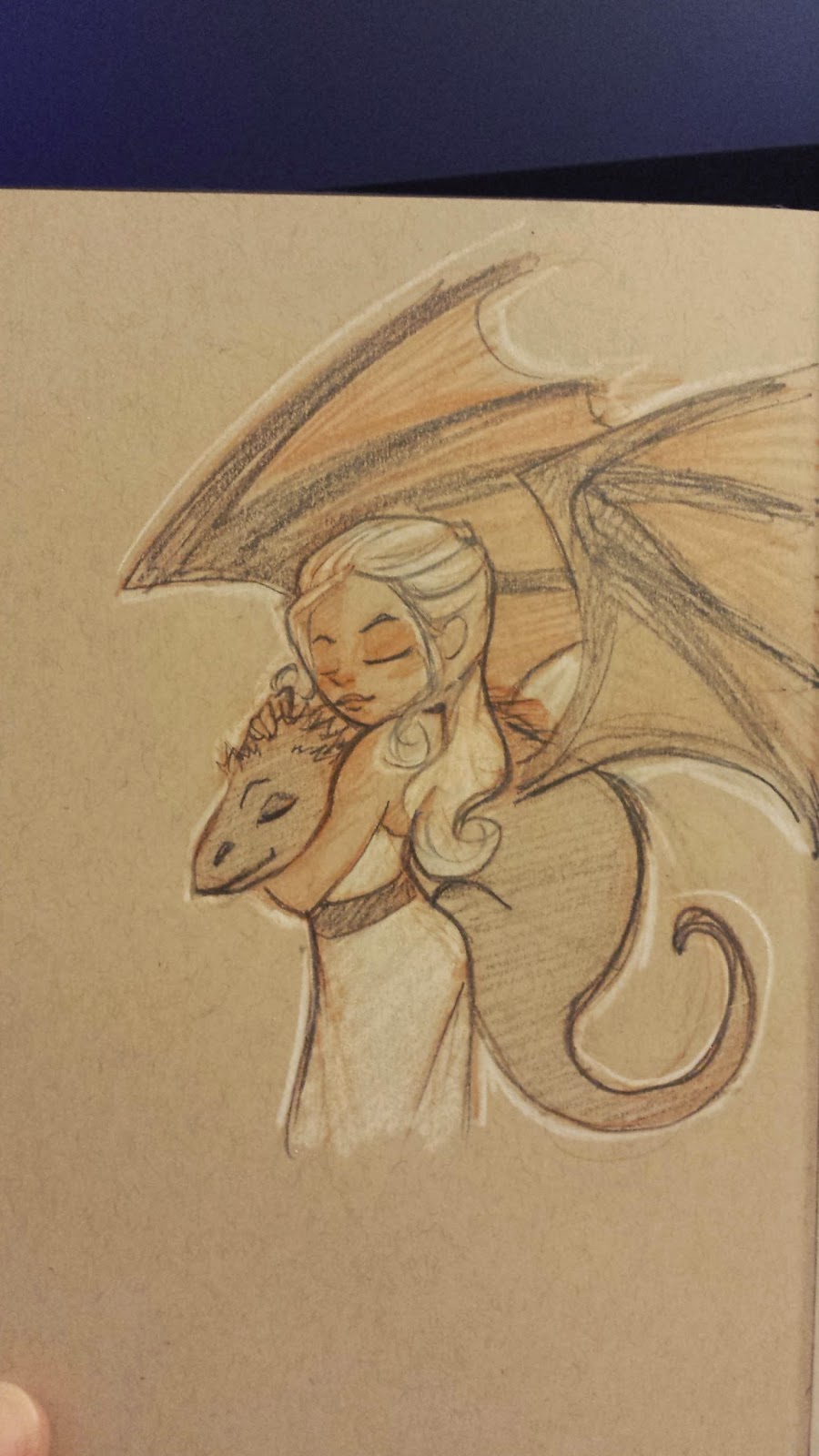 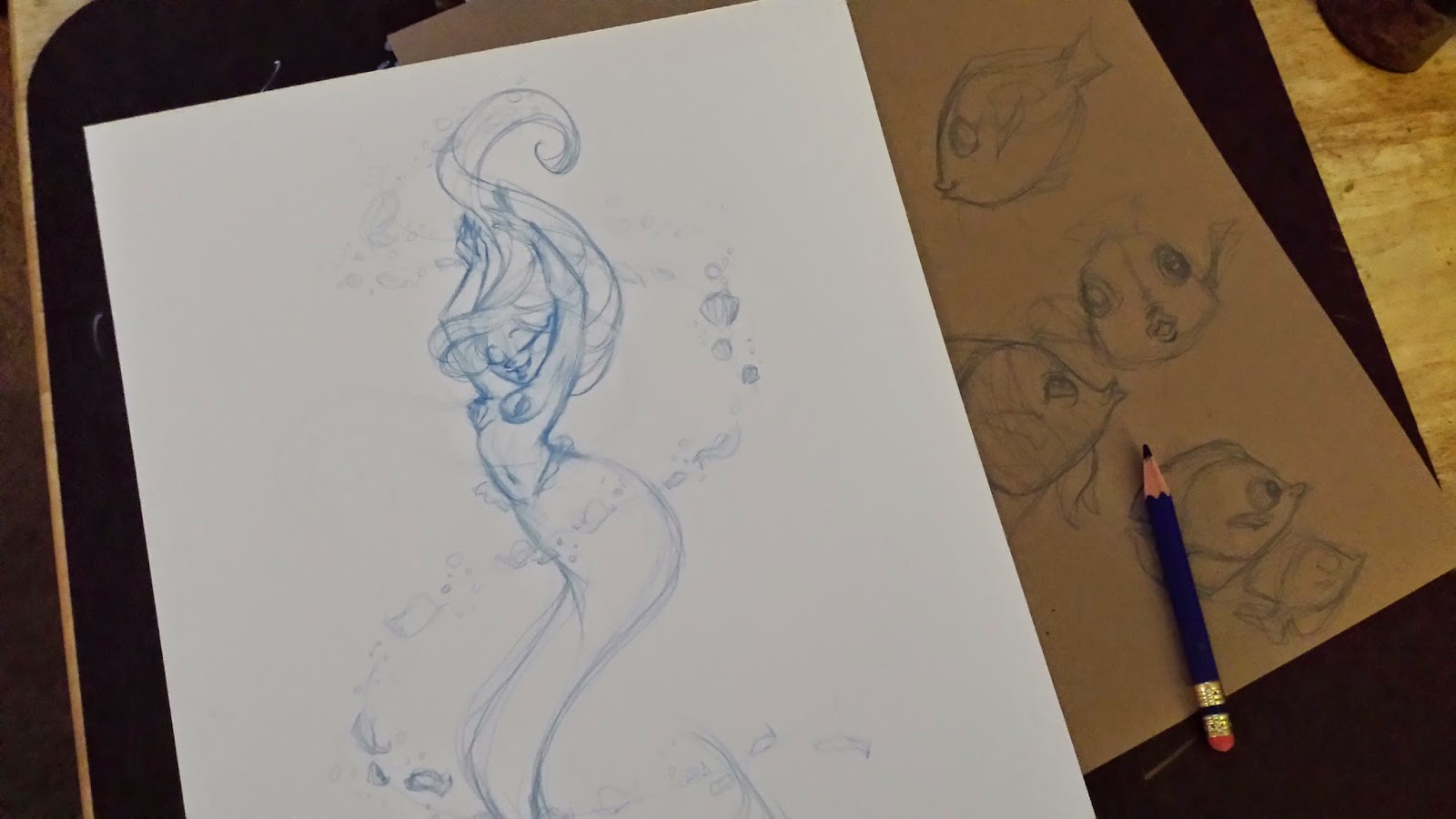 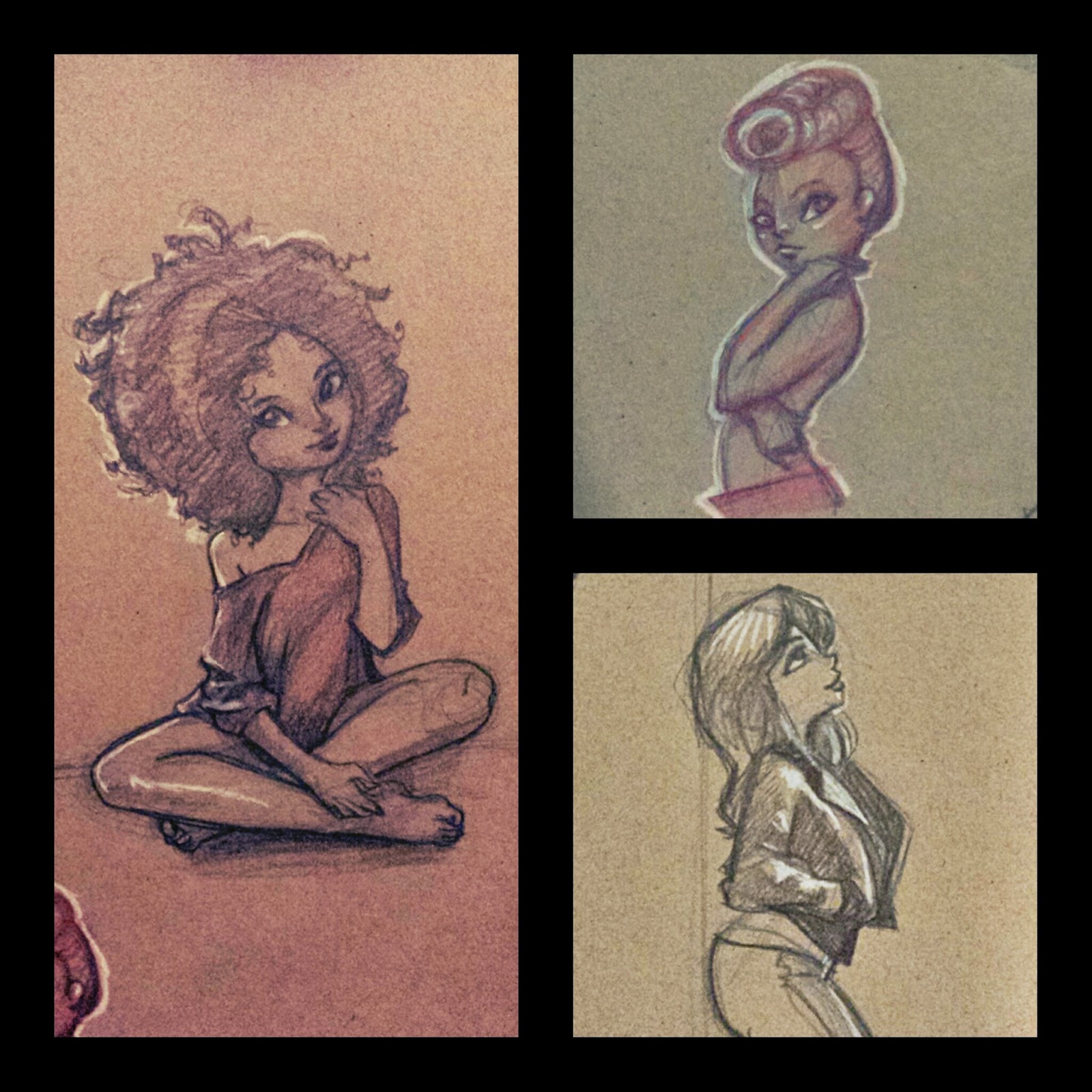 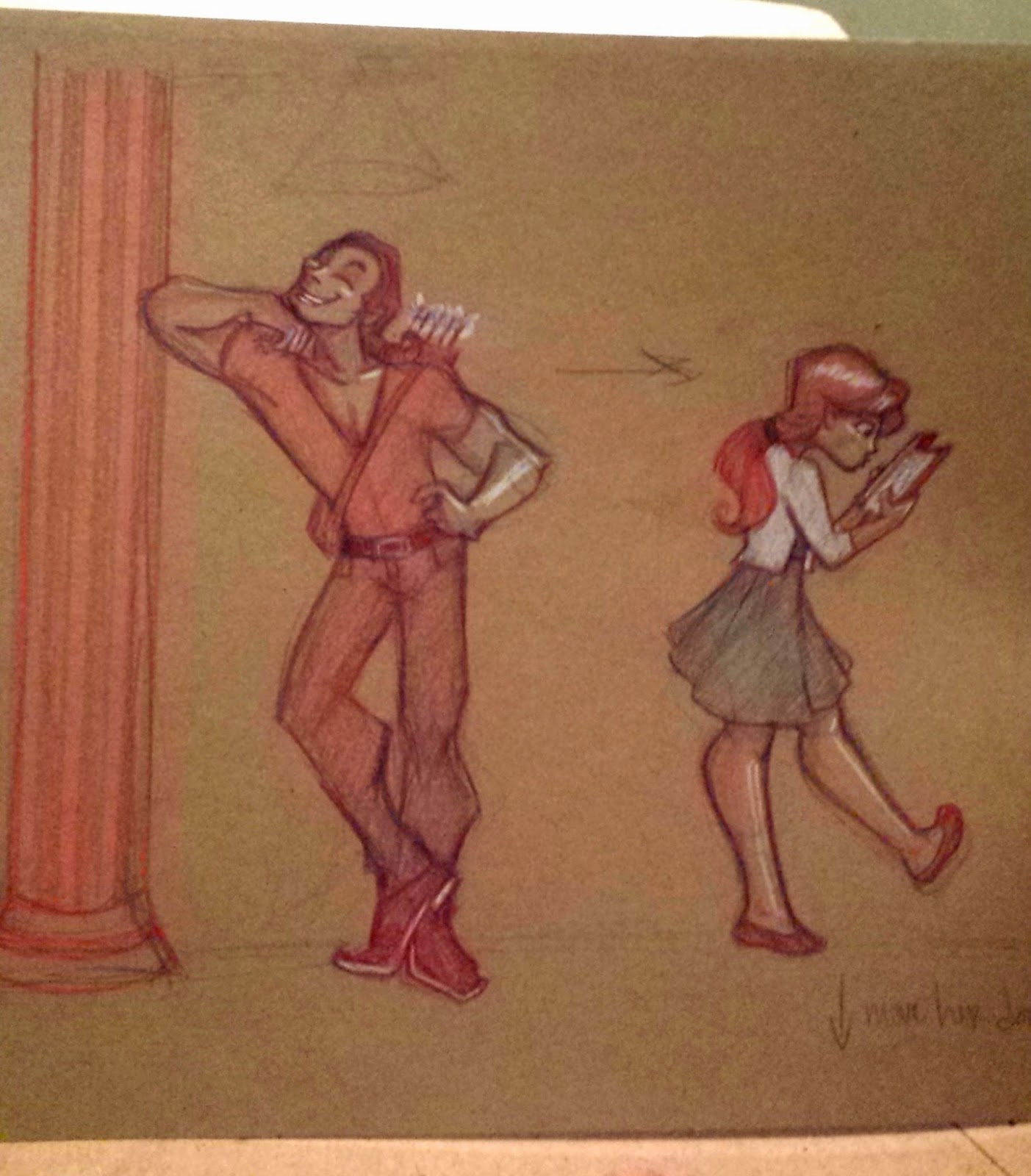 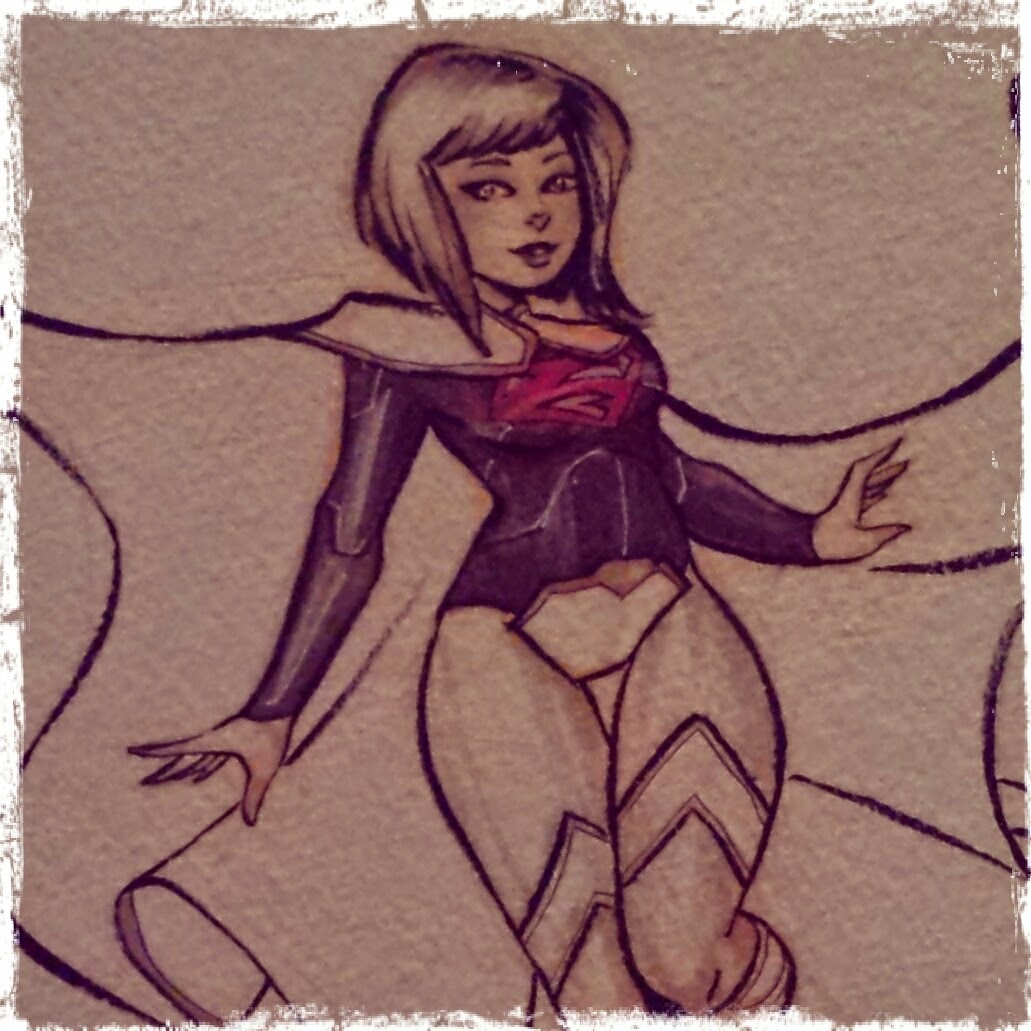 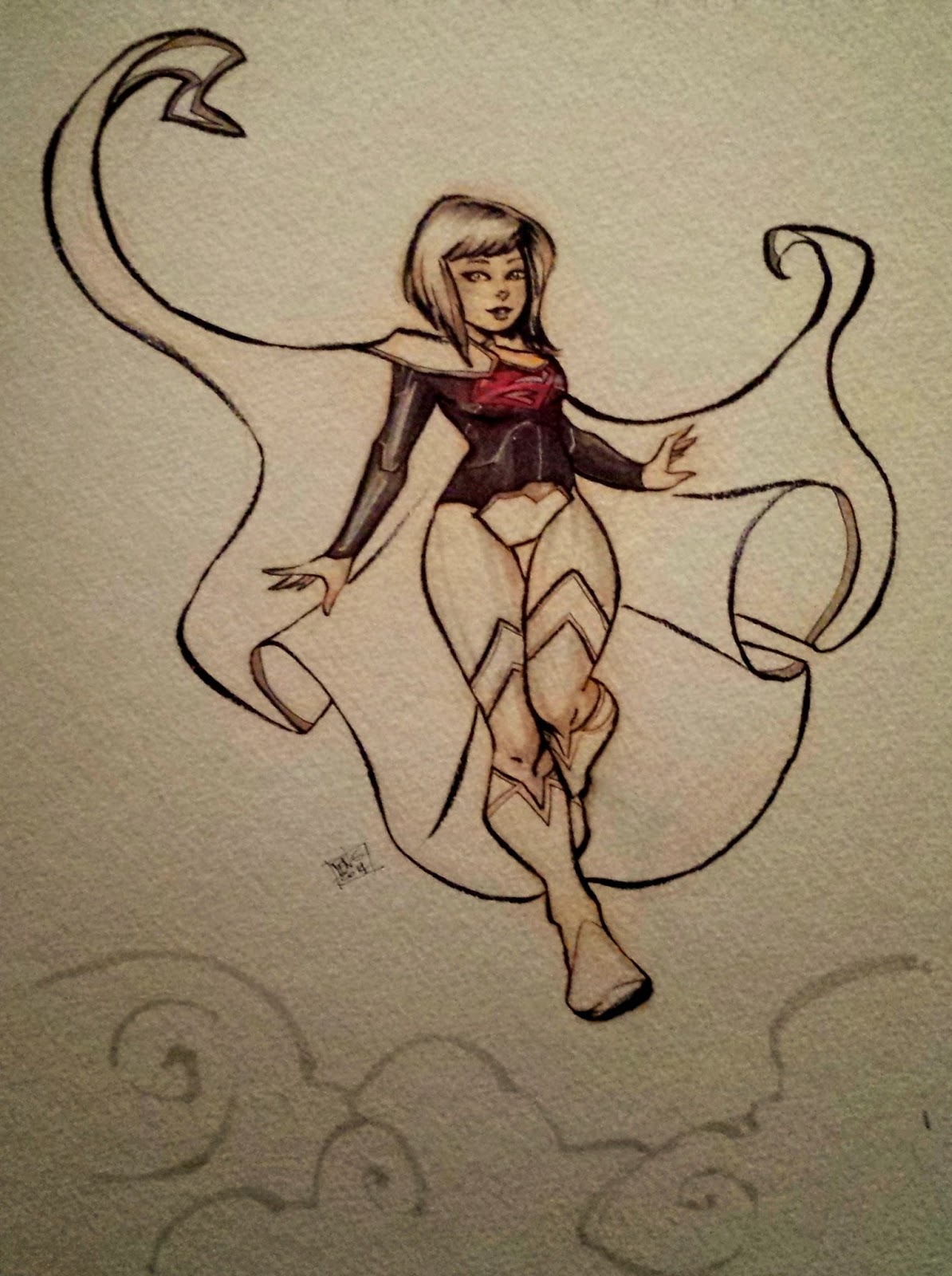 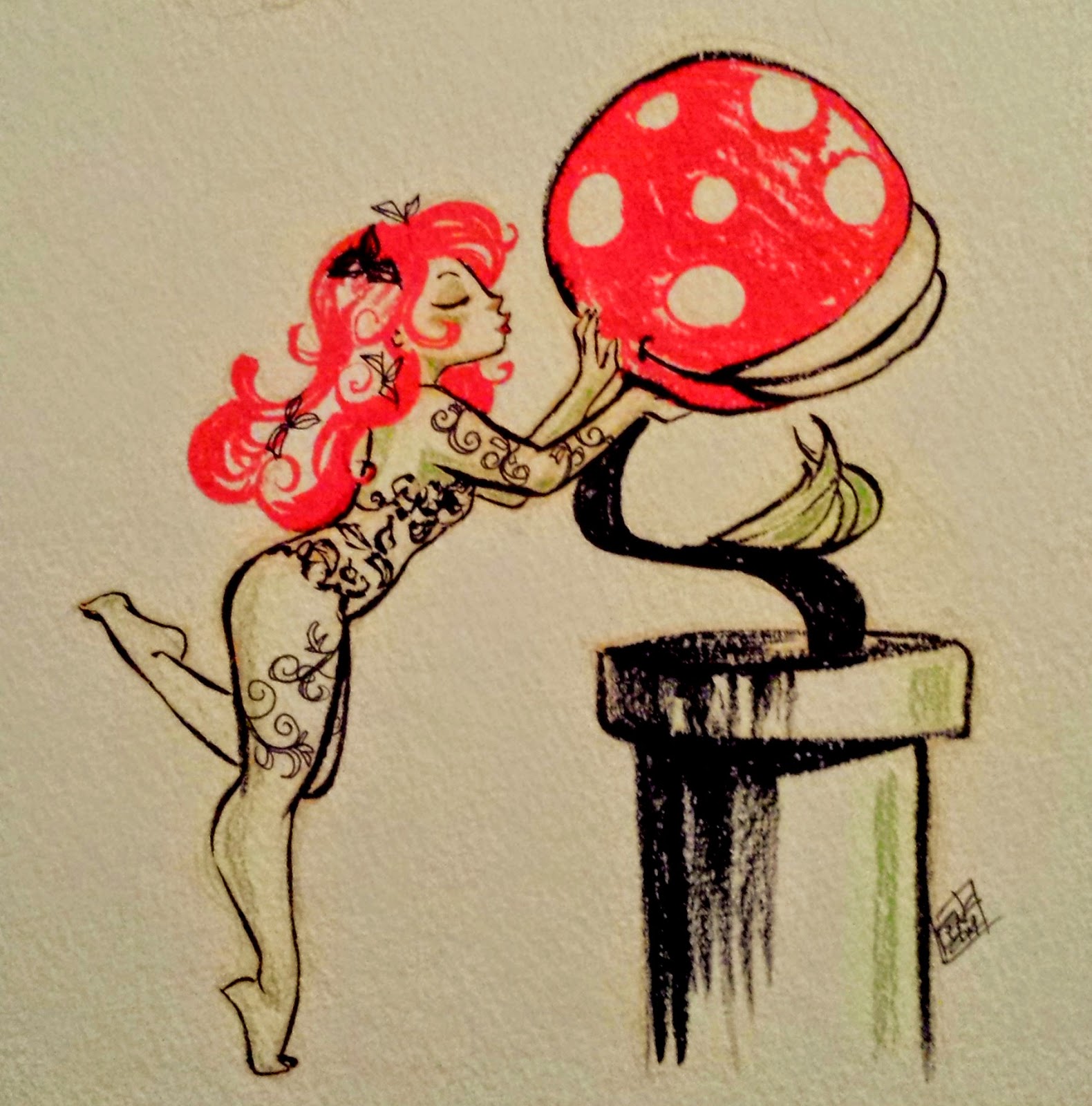 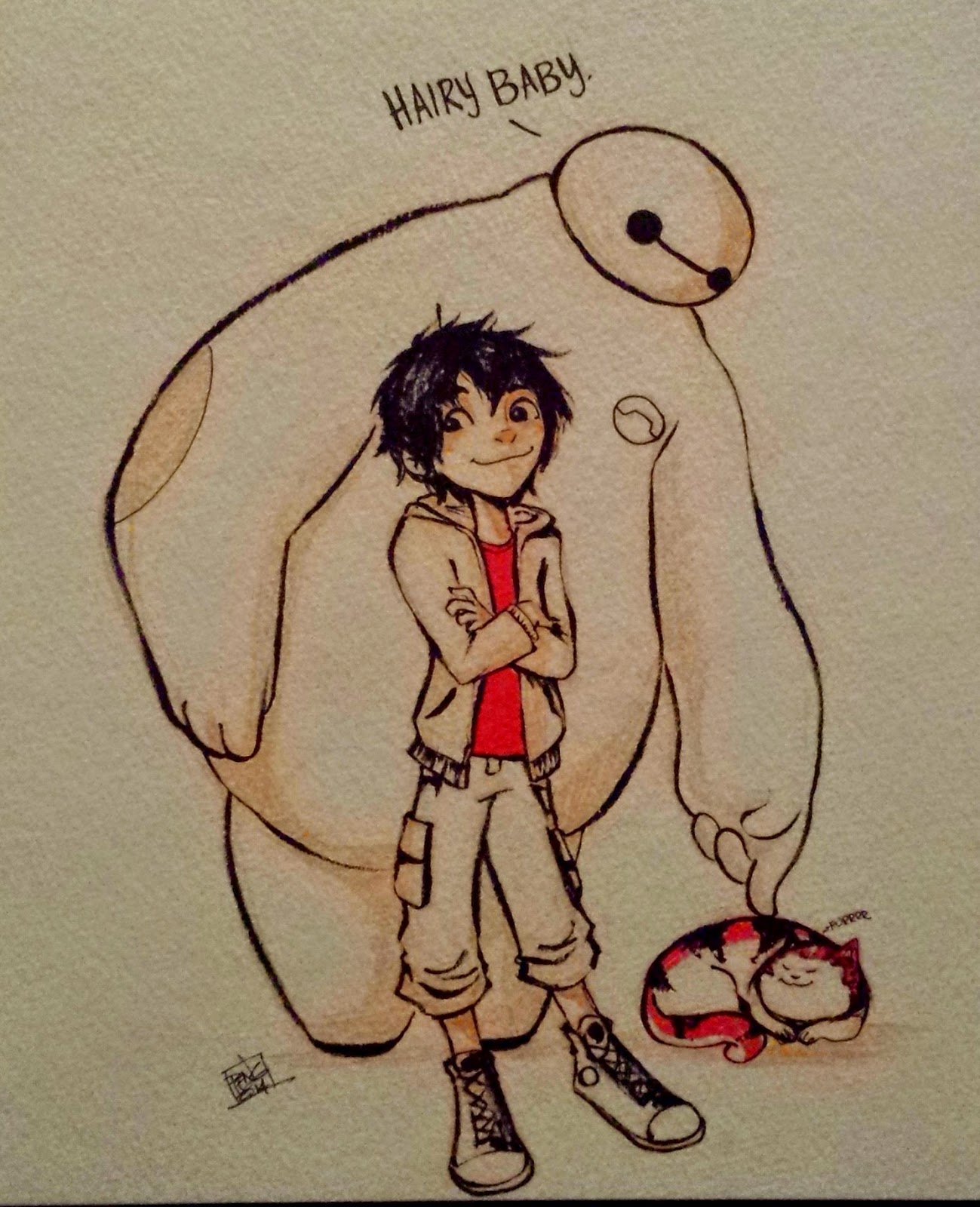 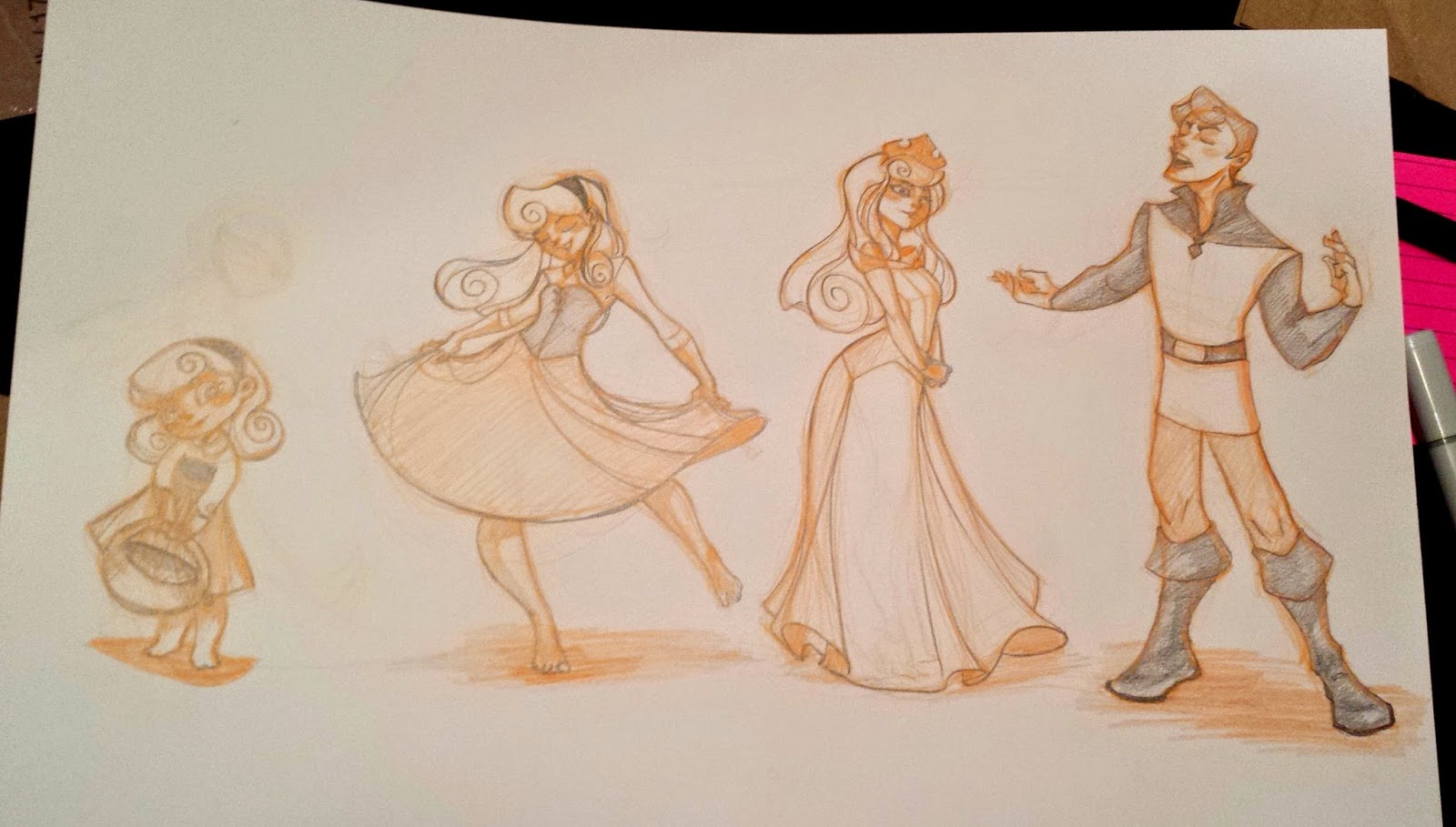 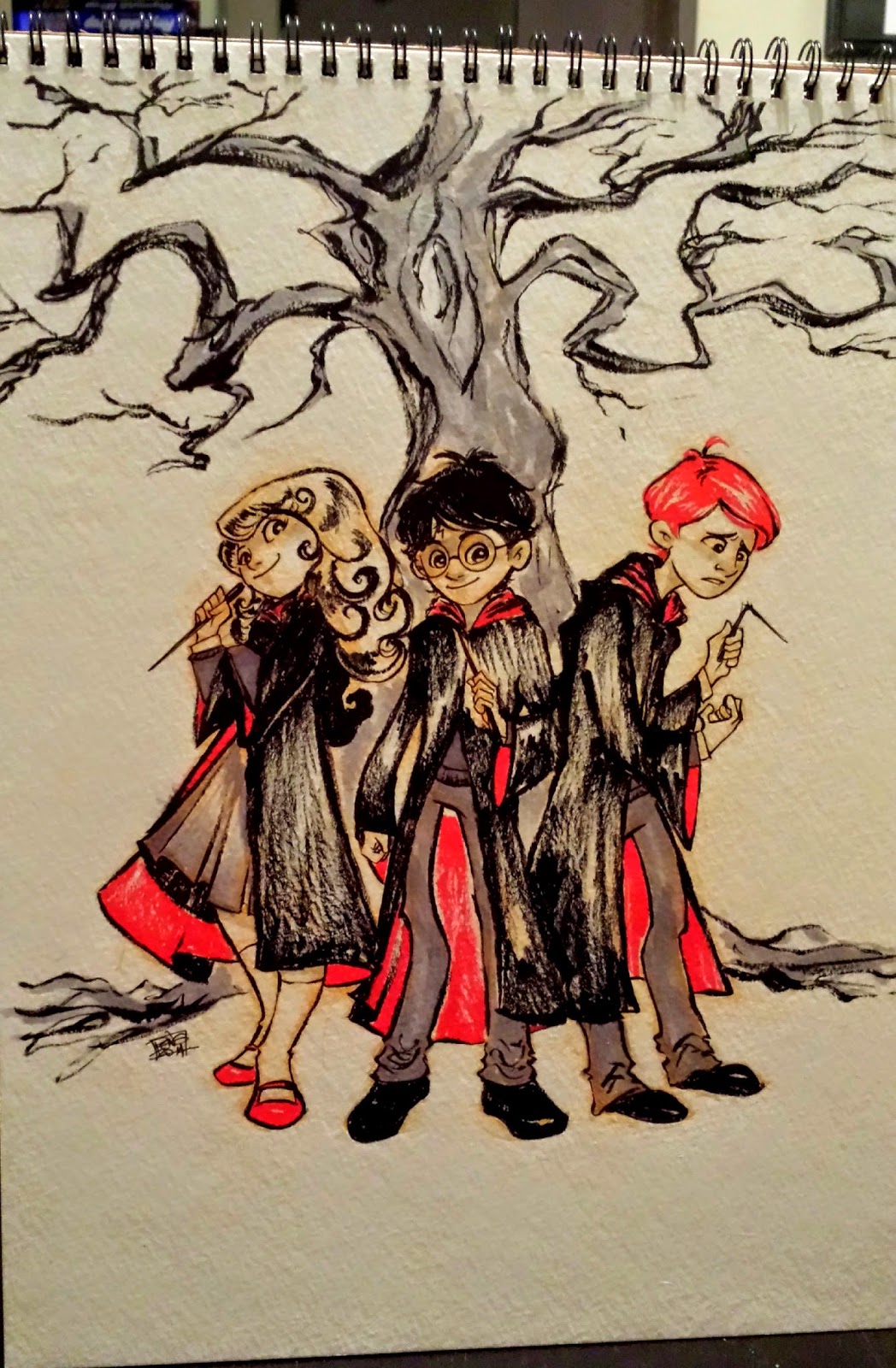 another sketch dump. all of these were done for my #100daysofsketches challenge that i, apparently, seem to be the only one participating anymore among my studiomates. it is tough to do on a daily basis and i definitely miss days. but it wouldn't be called a "challenge" if it wasn't, now would it? i am still following thru with it though cuz it's really helping me to work on my figures more, especially my dudes. man, that's a huge hump for me to get over. teaching urself something u know nothing about is pretty dang tough, i must say.
anyways, please follow me on Instagram - @p_e_n_g to follow my 100 days AND join in if ur up to the challenge. i think i'm up to the early 40s. lots and lots to go. its great for adding to my 2014 sketchbook, which i should hopefully have by NYCC. fingers crossed!
No comments:

[listening to "rhythm of the night" by el debarge] 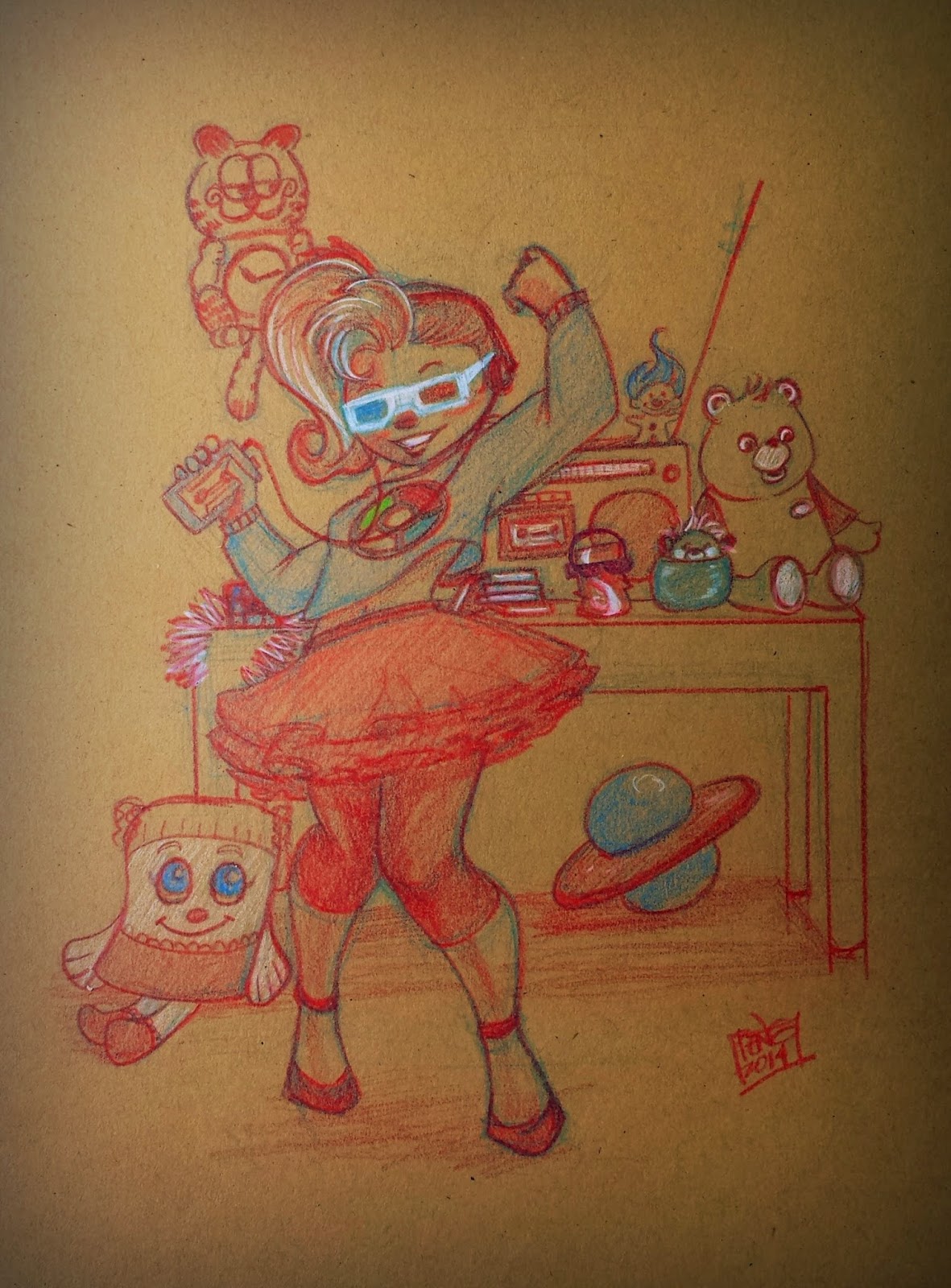 its apparently 80s week on the Girls Drawin Girls blog. i haven't had much opportunity to participate in their weekly theme but i had to get involved in 80s week. i mean cmon! it's the 80s! only my decade of cool stuff - cartoons, movies, toys. not so much the fashion though. but i was a kid so it wasn't as bad for me as it was for the adults. =P
anyways, i was much younger than the lady in this sketch, but if i were older i would like to think i'd dress this cool and hip. i had pretty much everything that's in this drawing except for a Simon sweater and a Teddy Ruxpin. i never wanted a Teddy Ruxpin cuz it just creeped me out too much. ah crud! i shoulda put my GoGo the Walking Pup in there. what ya'll know about that! HA HA!
No comments:


some recent logo work i did! logo work is probably the easiest AND the most difficult thing to do, at least for me. on the one hand, the artwork is less involved, it's usually vector so no crazy rendering, and it's limited to a handful of colors. BUT because of the brand recognition it needs to catch the audience at first glance and that's so tough to do with the limitations of a logo.

both of these logos were done for one of the coolest clients an artist could ever ask for - the owners of my local comic shop, Third Eye Comics (Steve & Trish). now if you know them, you know they're more than just owners of a comic shop. their amazing insight into business is why their shop is flourishing in an industry that has been more and more in peril as technology gets better. they're partners with the guys that run Awesome Con DC which, only in their 2nd year, has grown so big that it's expanded into 2 other cities. on top of their great business savvy, they're also just the coolest & humble people you could ever know.

the top logo is for an event that the ID STUDIOS crew will actually be taking a part of next weekend. it's part of the Baltimore Book Festival in Baltimore, MD. they will have a section that celebrates all the cool stuff about comics called the Charm City Comic Pavilion. we'll be there along with other comic creators so if you're in the area, come on out to the Inner Harbor on Sept. 26 - 28!
the second logo is for a new company that Steve & Trish are starting to do events with a nerd culture theme - Forever World Promotions. watch out guys, that's gonna be big! seriously!

here are the sketches that i did, with the help of my hubby, before i got to the completed versions. can u guess which one he did?? =) 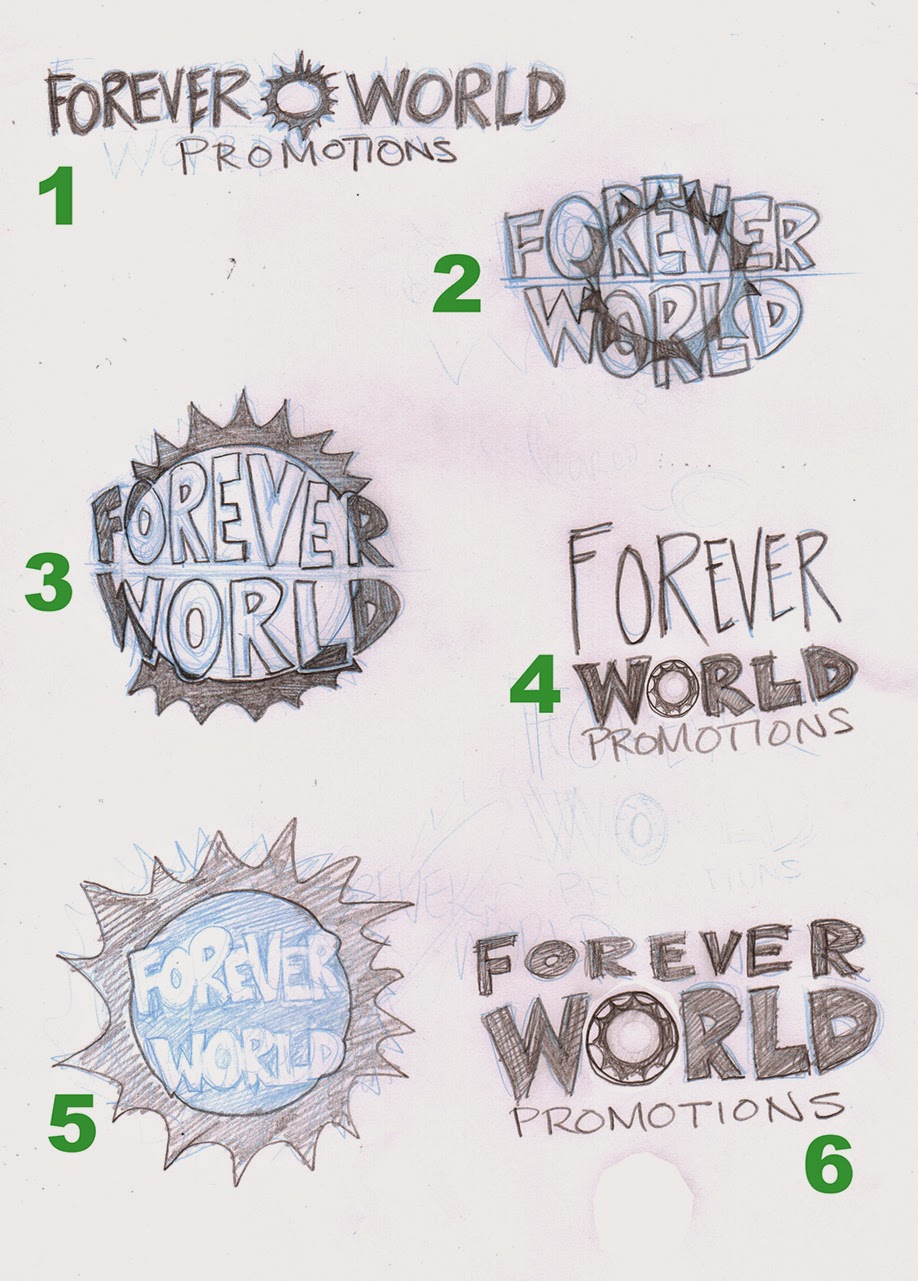 now, Steve & Trish are 1st class clients and they definitely understand that an artist's time and talent are valuable. they know that it takes money to make money but unfortunately not all clients get that. i can not stress enough the importance of artists not falling into the trap of designing logos in exchange for "exposure." other artists have probably heard this about 1 million times but just place this in the million and ONE column. anyone that is willing to pay for logo work with exposure doesn't understand the value of what they're looking for. i can harp on and on about why artists shouldn't work for "exposure" currency but chances are you've heard it all already (and written out more intelligently than my ramblings.) if you're just starting in the industry, you can do that but your experience of having done that is much more valuable than any exposure they're promising. just remember one thing - if it's "easy and simple" and it "shouldn't take much time to make," then they can do it themselves. but they can't. that's why they ask an artist to do it.

[listening to "flow" by sade] 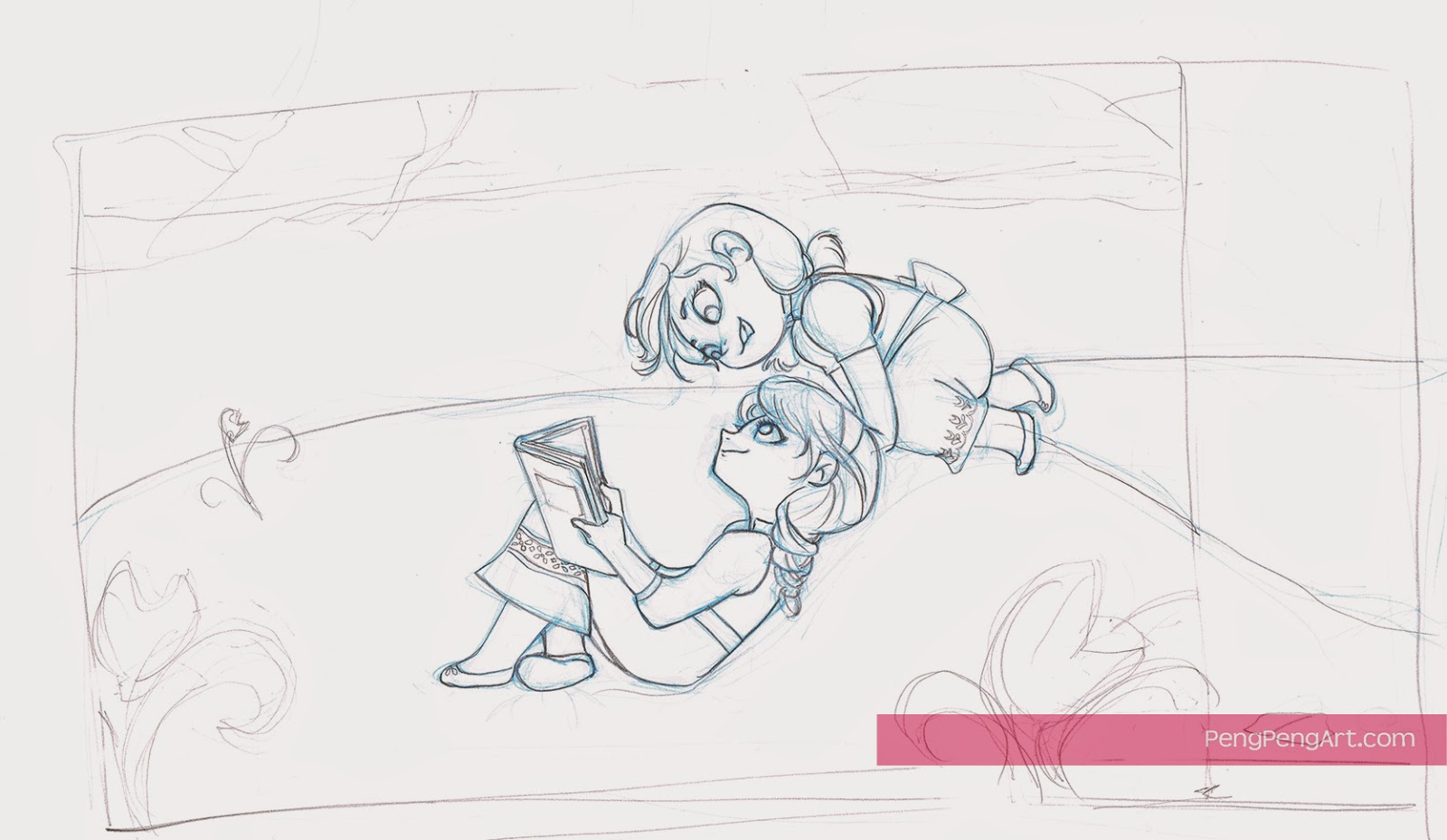 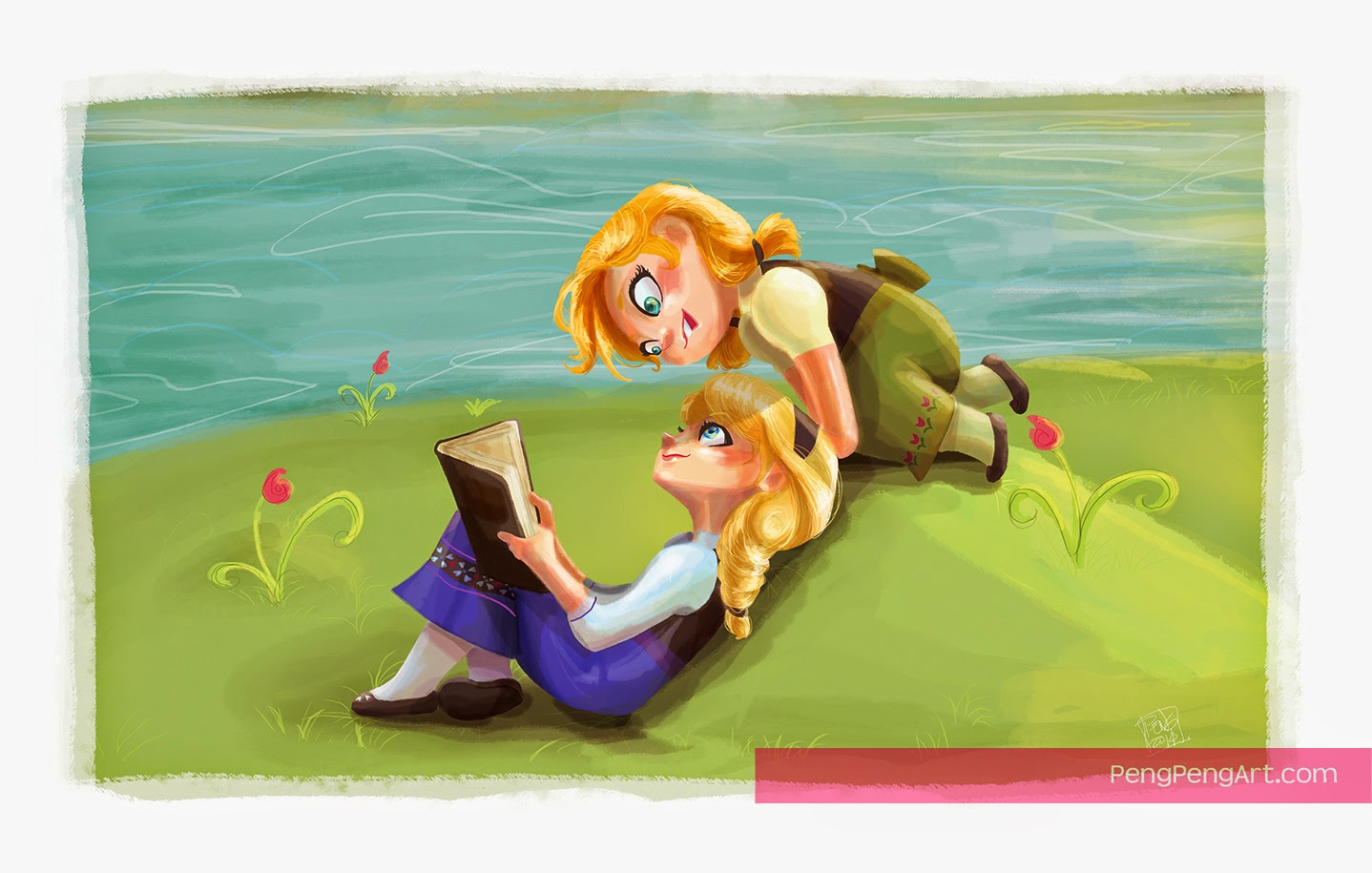 ok, i admit, it's been a while. super sorry about that. SO! to make it up to my poor online art table, i'm gonna post a piece i have not posted anywhere yet. after this though, i'll probably be posting it everywhere. but it's here first!

anyways, this is my very first piece i attempted to get approved by Acme Archives. unfortunately, Disney said it's just not "Frozen" enough. it's a hard pill to swallow and rejection is never ever ever (ever) easy to deal with. but i suppose i have to get used to that cuz it happens to every artist. yet another piece of the armor i need to build up if i wanna get ahead in the industry. i might turn it into a mini print for myself, i dunno. i certainly didn't want it to fade away into nothing, especially cuz i really spent some time on this. i'm not giving up though. i'm gonna keep submitting stuff to them until they finally give up and say yes. =P in the meantime, i've just finished a How to Train Your Dragon  piece so we'll see if that gets approved by Dreamworks. keep ur fingers crossed everyone!

with this piece, i've tried to get rid of the linework as much as i could. i have much to learn about doing it this way, but i'm gonna count this one in the win column for getting closer to learning it. it's not where i want it to be yet, but as with anything, i just gotta keep practicing. below are the other concepts i came up with. i may do the "Chocolate!" one for myself. with any luck, i'll have it for myself at NYCC. 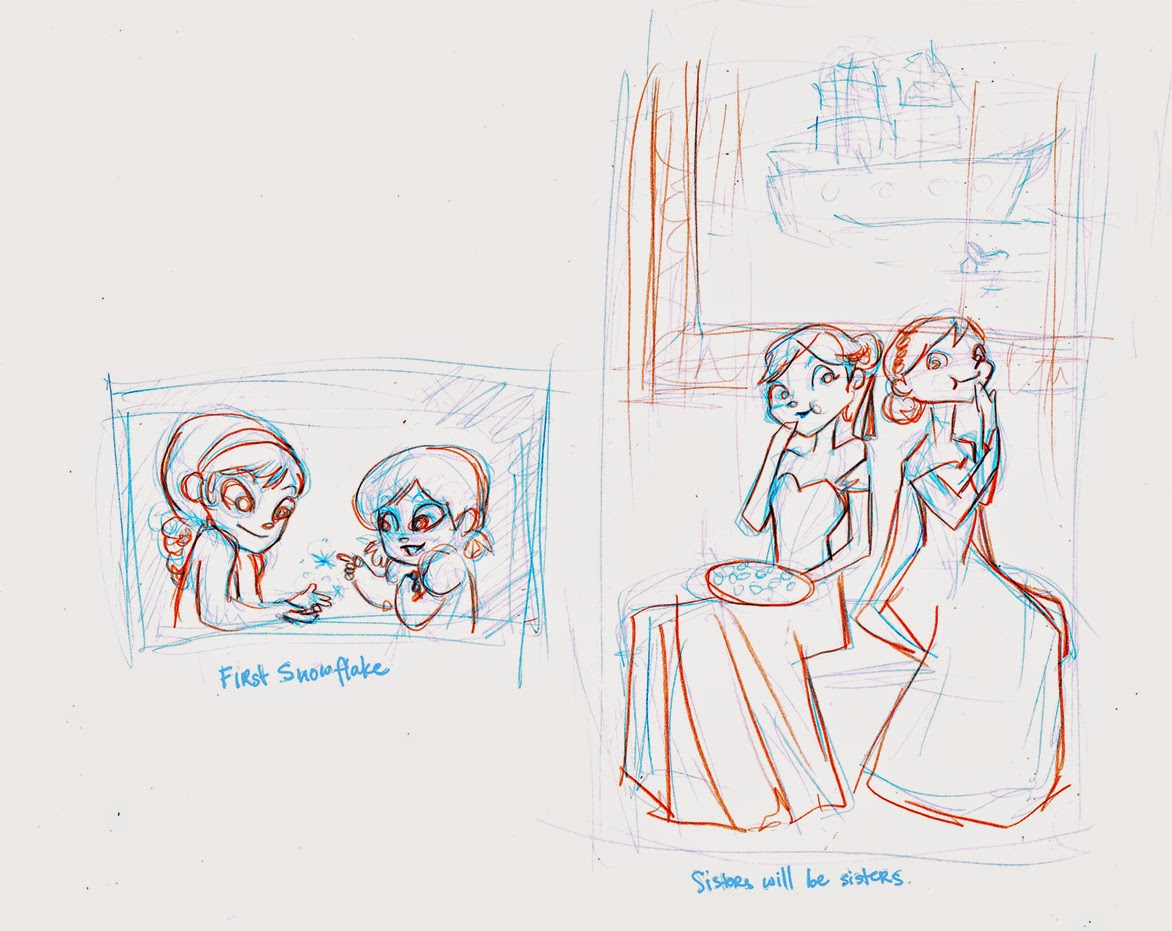 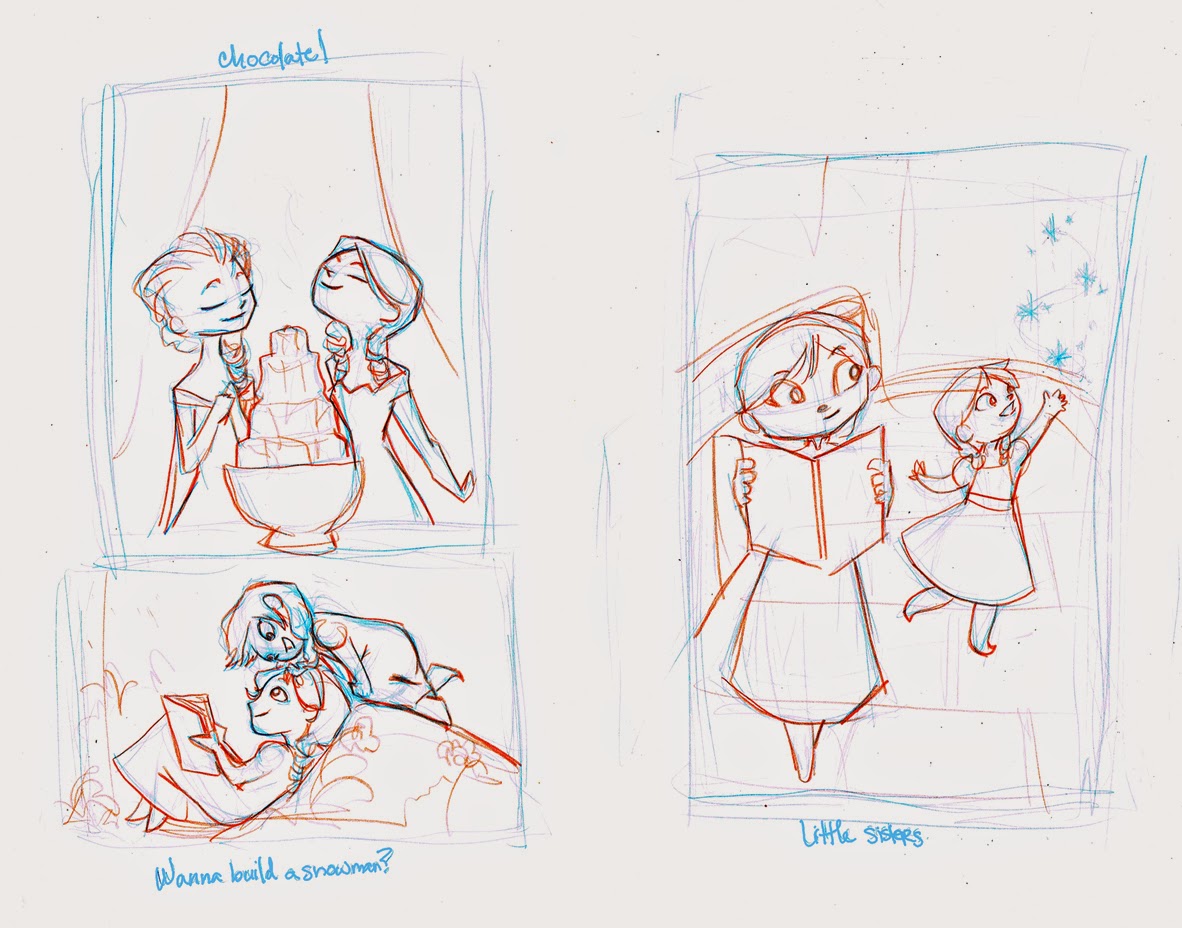