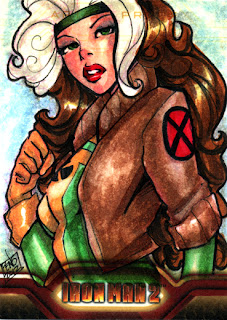 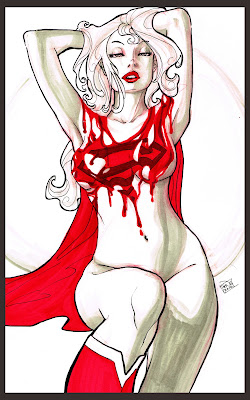 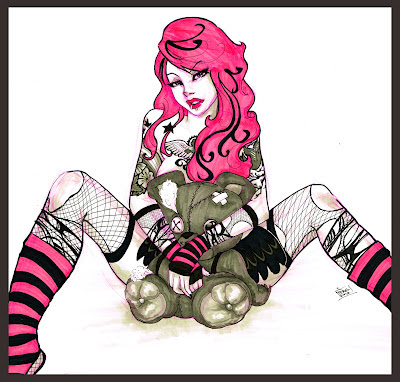 next up, i did these two pieces for the same client i did the Jessica Rabbit & Poison Ivy recently. if u haven't noticed, all of the ones i've done for him has had the same look. black & white with pops of some type of reddish color. they're always from a photo that the client had and i use the pose to draw from.
the first one, the Supergirl, was an idea he asked for specifically. it was inspired by another artist's work where they drip paint and it forms parts of their clothes. so please don't judge me and think i stole this other artist's ideas. they asked me to do it, i swear! ;P
the second one isn't of any specific character. she was inspired by the lady tattoo artist from the NY Ink show (her name is Megan), but its not her. the woman in the original photo was just a pretty nekkid lady with a teddy bear. but i wanted to grunge it up a bit. i really like how this turned out.
1 comment:

by bell biv devoe [and to think i was only like 10 yrs old when i was singing this. tsk tsk] 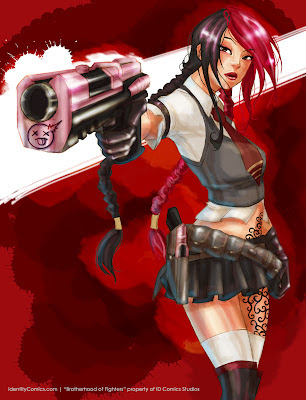 i didn't really get to take a lot of pictures at C2E2. and i wish i could say that it was due to being so ridiculously bogged down by commissions, but truth be told i didn't do any the entire weekend. NONE. that's unheard of. but before i let myself slip into despair, it was clear that the crowd at C2E2 was just something we've never experienced before. the vibe in there was extremely positive and everyone was having a great time. and everyone that came by were lovin everything we had on the table, but nobody was buying anything.
still, despite the weird love/hate relationship my ego had with this show, it was really fun. got to hang out with cool folks, got to meet new ones, and everyone in the studio made some good connections. it was good in its own way.
i still haven't had a chance to get the few pictures i do have on my camera off of it yet so i'm posting the new pinup i drew of Lali, my original character. we used the poster to promote our "Brotherhood of Fighters" comic we'll be premiering the week of San Diego Comic Con. it's going to start as a webcomic, then we'll produce it as a collected graphic novel later on. we have BIG plans and it starts with a free comic for all to enjoy! 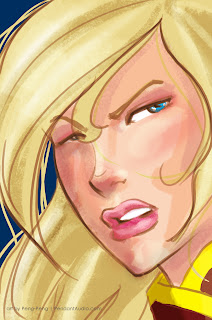 since this month's Supergirl #60 cover for PendantAudio.com was due right before we left for C2E2, i had zero time to whip one up. so this was all i could muster at about 4am. and though it may look like a cheap solution, i did draw it all digitally. which i've never done before. so that was kinda exciting. didn't know i had it in me. =P hopefully, the next time i do this, it'll be better.

other than the con, i've really been spending tons of my time trying to get projects completed. we have a large project we're working on providing illustrations for an RPG game of sorts. we just finished TWO comics for 2 different independent publishers. we're elbow deep in a storyboarding-type project. and the cherries on top are sketchcards. lots and lots of em. i'm trying to steal moments away from them to update this and share with you, but sometimes i just work all day and forget i have to eat. not cool. i'll upload pics from C2E2 later on.
No comments:

"late" by kanye west is pretty much what i'm feelin as i write this at 4am. i don't know how but we manage to be late for many things. 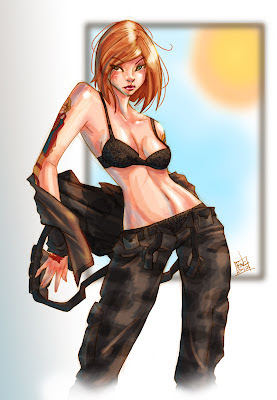 anyway, i just wanted to say if ur in Chicago, COME SEE US AT C2E2!! we'll be set up in Artist Alley tables C15 & C16. come by, say hi to us friendly folks at ID Studios, and maybe even get a commission (or two *wink*wink*). we'll have prints as usual, along with our individual artbooks for sale, and theFranchize will be selling Fanboys VS Zombies #1 along with Flash selling Iron Muslim which just came out this week. both books are produced by BOOM! Studios. pick one up at our table and get them signed by the artists! hope to see lots of new faces along with familiar ones.
as i continue packing, i leave u with the above image. it was a commission i did for a repeat client (gotta love those!). they gave me another year's subscription to DeviantArt and in return i drew this of their original character.

never gonna give you up

by rick astley
(and if u didn't know that, for shame! j/k, sorta. teehee) 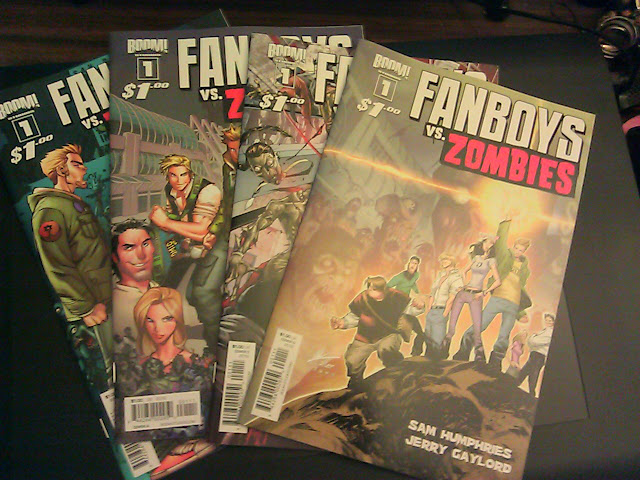 oh my gosh, i can't tell u how ridiculously busy we've been these past 3-4 weeks. i'm on the verge of curling up in a ball and just cry from all the tight deadlines but i suppose its a decent problem to have. as it is, i'm stealing a couple of minutes from what i'm doing right now to share what's on my drawing table. that's right folks, FANBOYS VS. ZOMBIES #1 from BOOM! Studios! this is the first big published comic that my hubby theFranchize drew (and i did some inks assists in there too). today was the release day but even before it was released it had to go into a second printing because it was sold out. which i guess means that comic shops ordered so much of it in anticipation of the release. how flippin sweet!!
SOOOOO if u haven't picked up ur copy already, go get one!! (please.) fun art, zombies, comic con - what's not to like! its written by Sam Humphries who is a pretty big deal. great writing in there too. obviously with all the guts the zombies are eating (and a few choice "grown up words") it's not really for kids. but for everyone else, its just right.
now i must go back to color flatting these pages before i get yelled at. @_@
1 comment: