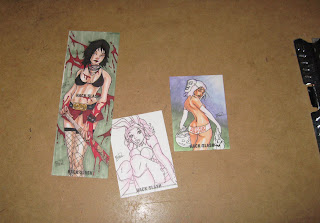 this was my desk last night. i was working on some artist return cards from the Hack/Slash series for a client that loves my card set! =) can't ask for more than that! he got the top half of a puzzle piece i made so he asked me to draw a bottom half. the one with the undies is my interpretation of a cover for a Detroit Fanfare exclusive cover that was done by the guy that created this series. the bunny chick is Lovebunny and she's another character by the same creator dude. i guess her story exists in the same universe as hack/slash since some folks drew her on these cards as well. hopefully he likes the finished results which i won't post until he sees them. =)

so here are the two commissions i finished before. the client should've gotten his pieces today unless the post office lied to me (which wouldn't be the first time). let's start with Kabuki (i think Image publishes this comic). 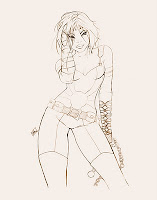 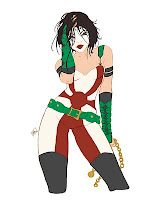 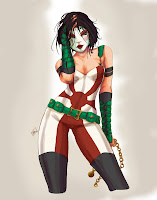 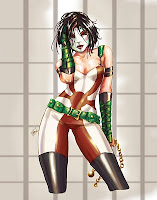 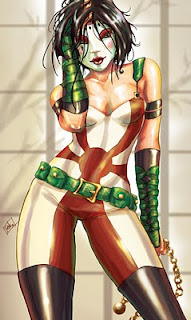 she was really quite fun and almost relaxing to do. everything about this character's design was right up my alley so i had a fairly good idea of what i wanted the finished piece to look like. as usual, after i scan in the lines, i go and put flat colors on all the little pieces. i do this because 1) it makes it easy for me to get shadows and highlights when i have a base color to start with and 2) it makes it easier for me to select pieces if i need to make a color change. i follow the flats with shadows using mainly oranges and purples though that changes when on different parts like the green bits or the white mask. then highlights come after that. i have 2 layers of highlights, one layer set to Screen where most of it is and another layer set to Linear Dodge which are for the really bright spots. after that i go in and add some secondary light sources with a blue color. the background was done with some blurred lines and i actually drew the bamboo shadows. normally i would just resort to a shape brush but this time i just went in there since it didn't really need to be all that defined. the last thing is an overall gradient of colors to balance out the colors as well as cropping it to a good fit. i found the model for this piece on someone's deviantart photography gallery. unfortunately i can't remember who it was. =(

now for Aspen Comics' Lady Mechanika. i've been lookin for an excuse to draw steampunk-type characters and so when presented with the opportunity, i hungrily took it! after having done it though, i think i'm good for a while. cuz oh my goodness! all the pieces!!! 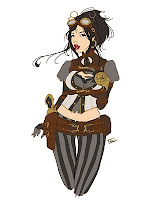 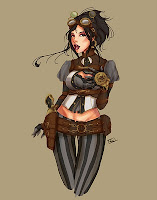 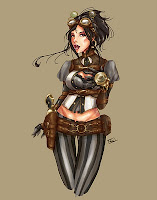 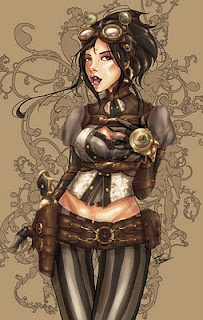 the pencils for this took THE longest followed by doing the flats because of all the teeny tiny pieces that went with the whole outfit. sure i could've just simplified it and left out some stuff but that just wouldn't be cool. i still really like the idea of steampunk characters and whatnot but i just need to take some serious time with them.
so all the reference images for this character that i could find online usually have her with a very stoic or solemn face. sometimes she slyly grins but no real emotion. so i decided to give her some type of expression. i've really been enjoying drawing mouths open lately so with the help of my current muse PlastikStars, i have her doing a little gasp and i imagine her going "what? a respectable lady like me?" that sort of thing. once i finished coloring the whole piece, i decided to give the whole thing a more brown-ish/sepia-ish color to it so some of the colors, especially on her colored spectacles, are muted a bit. the background print as well as the print on her shirt is a combination of a few shape brushes.