(PAN-i-juh-rahyz) - to eulogize; to deliver or write a panegyric about 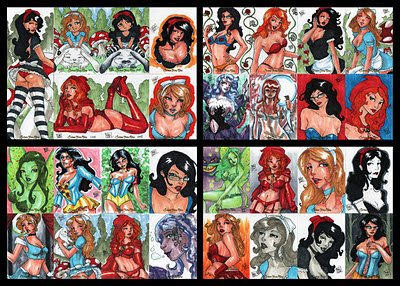 HAPPY THANKSGIVING, FOLKS!!
hope everyone had a happy and filling thanksgiving (or just a great thursday for those that don't celebrate it). i had a nice chilled out one this year. spent it with some family but nothing big. just great food and beer and a Harry Potter marathon. =)
but with the fantastic-ness (yes i know that's not a word) of thanksgiving comes the dread of packing because we're moving this week. i've been doing nothing since the holiday but breathing in settled-in dust as i pack up stuff. i can't believe how much junk we've built up! we've got about 12 bags of trash already and our "lab" (computer/working room) is not even packed yet. SIGH.
it may be a while before i'm able to write another entry so i'm getting it in right before we move. i've been unable to do a lot of work lately cuz of the holiday and then packing BUT since the Grimm Fairy Tales sketchcards are out now, here's all of the ones i've done! i just finished up on a Lady Death and Hack/Slash crossover set so once those have been released, i'll post them as well. next up, Josie & the Pussycats and then a Shi set. really excited to work on that!
so for now, wish me luck so i don't get buried under all these boxes. ={