[listening to "something about december" by christina perri] 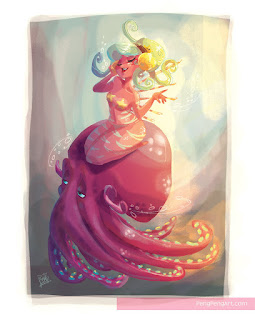 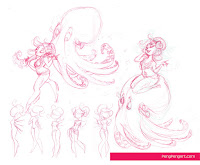 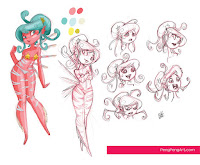 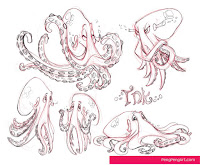 well, CTNX did not disappoint and after the show i took a much needed week to deflate and spend much-needed family time for Thanksgiving. after that i've been playing catch up and i'm pretty sure i'm still fairly behind. but the Christmas season is very distracting for me. cuz all i wanna do is listen to christmas music, drink eggnog latte, and enjoy christmas movies. none of which has WORK incorporated in it.

since i don't really have a clever lead in to the art i just posted, umm ARTWORK! =D so i worked super hard right up to CTNX and i drew more than i think i've ever drawn in such a short amount of time. as a result, i got all these things i haven't been able to post! i drew new stuff for my latest mini artbook - DAYDREAMS Book 2. the biggest is this pinup, that i used as the cover, of my little sea creature Pi and her pet octopus Ink. i did some exploratory sketches of each of them too, something that has never really been part of my book. i really wanted the vast majority of stuff in the book to be more about the ART and not so much about the FAN art. it was really weird doing that for the book because i've never done it before, but i think it turned out pretty good. i think it was pretty well-received considering i only have 1 copy left for myself. NBD. kakaka

the colors for the pinup were all done in photoshop. i'm really starting to enjoy these brushes on photoshop too. and apparently i'm pretty good at coloring cuz pretty much everyone that came up to my table at CTNX said as much. that's a relief! the responses at CTNX are so hugely different from any comic con i've ever set up at. folks at ctn talk about the art techniques, folks at comic cons talk about the subject matter. it's like night and day - both great in their own unique ways.