wow.
nothing for october, eh? just lets u know how nuts it was in that month. we had a convention and an expo last month. and since we've never done the expo before, it was quite a lot of preparation. after coming from an incredible high at Baltimore Con - the MOST successful show we've ever had thus far - we were very deflated from the Screaming Tiki con in Ohio. long story short, it wasn't very good for us. then at the Kids Expo, we set up as Big Heads Little Bodies Caricatures and it was insane preparing for it. we had no idea what to expect. so we were all pooped and ready for a little vacation until 2009. hence, the long absence.
still, it wasn't like i was sitting around twiddling my thumbs. because we were so busy at Baltimore Con with people, i actually had to take home a couple of commissions to work on them. that's never ever happened before! i was completely overwhelmed but it was nice in a hectic sort of way. so i was trying to work on those while preparing for the expo and that didn't work out at all. it took a month to get those commissions out the door and i feel like a douche for taking so long. i hope they forgive me. i will do better i swear!

but can i just say that Baltimore Con was flippin amazing! never have i seen so many folks so excited to see our artwork and meet us. it was great! at one point, there was literally three rows of people waiting to look at our table. i felt really bad for the guys next to us cuz people were starting to spill over to them which one would think would be a good thing for them, but not so much. =/ plus, i saw my buddy BAS from deviantart. man that kid grew like 3 feet since like a year ago! crazy how fast these kiddies grow. kinda cool that he's holdin it down. hopefully by the time he turns like 17 or 18, he can chill with us. right now being as young as he is, i feel like i'm breaking some kind of law just taking pics with the guy. o.O coolest kid ever tho!

well, needless to say i've got loads to post. but i'll spread them out. if there's one thing i'm not too fond of doing, it's reading a super-long post. several posts are fine for some reason but one long post is discouraging. but that's probably just cuz i don't like to read. =P so for now, enjoy these photos of the Baltimore Con 08! 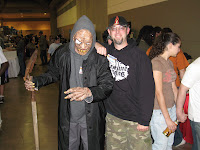 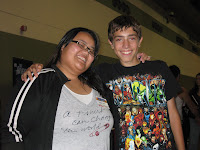 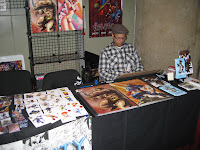 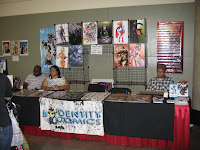 Anyhoo... I love long reads, Just like how I used to like our long emails. haha we are friggin lazy now. Or just boring now. maybe both.

good to read on your blog... my art blog has turned into a random post blog. Well, i did actually post some photos on there... but nothing artsy, just cute! haha

see you on the NEW xbox live experience (aka WII RIPOFF!!!!!)