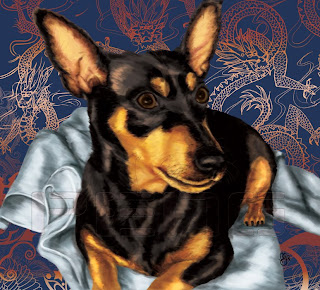 ok, so it took one day longer. and even at that, i feel like commending myself cuz i almost didn't want to finish it today seein as how we got The Dark Knight on Blu-ray this afternoon. very tough not to watch it. it looks fantasmagoria! which is a word i never use so that says something.
at any rate, it took some finagling with the dragons and stuff in the back but seein as how its not the most important part, i just went with it.
u may be asking urself "peng, what do dragons have to do with this mini-pinscher?" its cuz my bro-in-law likes all that typical asian-y stuff like dragons and kung-fu movies and chinese/japanese characters. his dog's name is Jade. and even though that is spelled with the first initials of his full name, i think it's also cuz of that asian-thing. HENCE, the dragon. (and the only reason why i didn't make it green cuz it's like "duh peng, jade = green" is cuz he likes the Rams football team and they're navy blue and gold.)
BUT WHO CARES! i'm just babbling now. just enjoy! ^___^

YAY! realistic goodness!! wow Penny these r AWESOME!! i didn kno u had it in u, lol! so this is what u've been up to lately, very very sneaky, :D