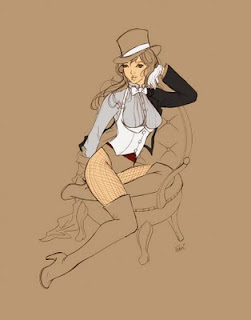 ok so after my stupidly long contemplative blog, clearly i needed to get it together and stop the tea party. so i took some time, got my big girl panties on and said "that'll be all."
so i'm back and on and poppin. haven't drawn much worth showing cuz i've been doing a lot of commission stuff and logo work. it's tough to post any logo work cuz i hate ruining the surprise for the clients and stuff. even when it's done, i just don't wanna put their logo out there until they've put it up on their own websites and whatnot cuz i'd hate to be the reason for a concept to get stolen.
since my last journal, i've been to Otakon in baltimore, then Comic Con in San Diego, and then out to Wizard World Chicago (which apparently wasn't even called "Wizard World" anymore). i have tons of pics of my exploits (especially in San Diego) but i haven't gotten the pictures off my camera yet cuz my printer (which has my memory card slots) broke!! so i haven't been able to post anything.
ANYWAY, moving on to the entry for today. i've finally been able to draw something for myself after a long drought of creative juices. i've been trying desperately to draw Zatanna for a print and whenever i force myself to draw during an artist block, it will inevitably turn into poopoo. and of course, once i see its poopoo, i get so discouraged and i tell myself i'm a waste of space. but one day i finally got up and decided to draw something and it turned out not so bad. i plan on making it into some Mucha-inspired piece but we'll see how it turns out. hopefully i'll be done with it to make it into a print in time for Baltimore Con. the rest of ID Comics keep crankin out these fantastical new prints and i'm still clingin to my Powergirl print that everyone and their Uncle Bob has. at any rate, after this i got another commission to work on and then maybe i'll tackle a Storm piece. EEP! wish me luck!!!
by the way the Pittsburgh Comic Con is this weekend starting friday the 11th until sunday the 13th. if ur in the area and plan on attending, come by and say hi to us ID Comics folks!!! we got more of our new sketchbooks printed (Inside the Box Vol. 3) and new prints. come and see! then we'll get to see fellow artists that we haven't seen all summer. it should be fun times.
anyway, hopefully i'll keep up this drawing stuff now that stuff at my day job has chilled out again. but as i type this, i look down at my new little Ranma (girl-type) figurine that i just got this past Otakon and i can't be too upset. (^__^)

ooh, she's pretty. reading your posts is sad for me cuz i don't know of any of the references you make anymore... T_T