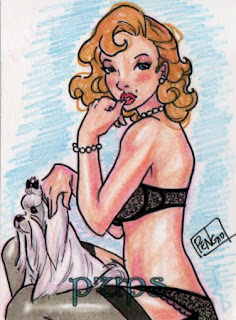 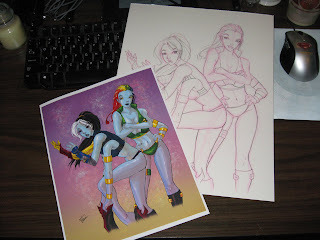 so for a little while, i was working on a set of sketchcards for 5finity called P'Ups. it's basically pin-ups and puppies. two things that are smack dab in my forte?!?! i couldn't pass it up no matter how much i dislike working on such a small medium. i've only been allowed the one image to post up until the release of the card set. so once i get word, i'll post the rest of what i've done. i actually really liked it! i hope i can get to work on the same subject matter sometime in the future, just on bigger paper. that is, of course, if i can somehow find time for myself. T__T
the other image is a commission i recently finished of this guy's original characters. (yes, they both have 4 arms. that's not an anatomical error. =P)

pin ups and puppies?? awesome!! maybe THAT'S what I want my next tattoo to be! hahaha... I still don't know what I want. Still something "motherhood-related" but dunno what yet...

Nice stuff man... update more! Even if it's just randomness!

i know what u mean! i still don't know what to make as far as a motherhood-type tattoo. but we'll come up with somethin. =)