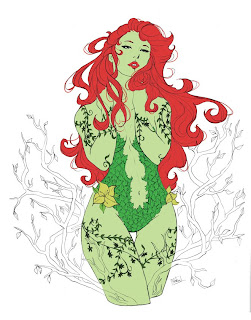 Heroes Con in Charlotte, NC is finally upon us and i'm so durned excited to be going i can barely contain the glee! me and theFranchize will be holding down the Identity Comics table since the other 2 members aren't able to make it. so if you're plannin on goin, stop by our table! we'll be at table AA-241. we will have a couple of new prints to sell, some of our ID sketchbooks, and the usual suspects of trading cards. we'll have tons of Iron Man 2 artist proof cards to sell as well so if ur lookin for some official Marvel original artwork, we've got 'em for ya! along with our usual free headsketch, we'll have a contest for 2 free inked commissions this time (one by me, one by theFranchize). i look forward to seeing some new faces as well as familiar ones. i always enjoy being at this con but i think i'm just utterly grateful that my leg and back are working again and i can actually take part of the con.
so, much to my dismay, i didn't get to finish the Poison Ivy for this con like i had hoped. but i guess it'll just have to wait for the Baltimore Con to make its debut. at this point, i haven't made too much progress on it so i'll just post what i have so far. (durned day job!!! it keeps me from doing anything but sleeping.) hope i don't disappoint anyone with my lack of a new Poison Ivy print other than myself cuz that's hard enuff as it is on me. if there's anything that i'm certain of from these past couple of days, it's that it's definitely time for a change in my personal life. it's gonna come sooner rather than later - mark my words! =)