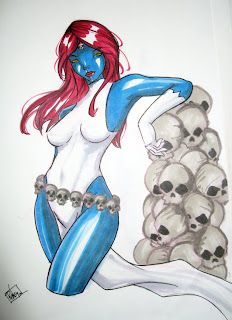 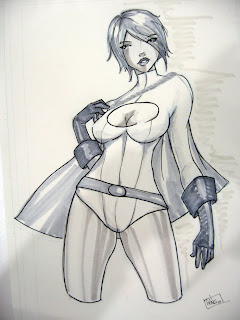 so Heroes Con was fun as always! money-wise though, not so good. it was not the same bustling convention that we normally have when we go out there and i'm 99.9% certain that it's because of our spot coupled with the fact that we only had 1 table. we should never, under any circumstance, ever have only 1 table for ID. it used to be somewhat ok when we first started but now that we've each individually built up our portfolios, our stuff is somewhat competing with each other now to the point where we're unable to shine individually. i still think that when all the members of the studio are together, we're a far more "formidable" force than apart. but we need at least 2 tables to spread out so people will notice us.
still, despite the lack of monetary gain, theFranchize and i made more headway to networking with folks. Jonboy Meyers and Cheeks even took the time to drop by the table. i got to meet Cheeks's ichiban and she was quite the lovely lady. they thanked me for buying the pencil case she made and i felt really humbled. but honestly, i'm just happy they made it for me to get cuz i've been thinkin of getting a cloth pencil case for a while now. [sometimes, my big plastic art box is just a wee bit cumbersome when all i wanna do is sketch out stuff at the starbucks.] so instead of buying some generic case from somewhere, now it's got a Cheeks flair. =)
as mentioned previously, the con was pretty much a snoozefest as far as traffic to the table. so i only did one commission the entire weekend which is the colored Mystique. i got to break in my copics and i was very thankful for the opportunity to have used them so i can get better with them. Adam Hughes i am NOT. the Powergirl one was something i drew for the Comic Book Legal Defense Fund. one of the folks came up to me and asked if i would like to donate an original piece for them to auction off at San Diego Comic Con and in return i get a year's membership. since i was drawing free powergirl sketches all weekend, i figured why not. i don't really know at what point i suddenly became the one to go to for a powergirl drawing but i certainly don't mind it. =) just draw a pretty girl with short blonde hair and big boobs. how hard can that be?! kekeke

LOL... I like your Powergirl description! Do a con in Jacksonville or ATL and I would come visit! Even Orlando again...