so i've officially moved from having my full-time dayjob to being a full-time artist (again). this time i've got goals and not just dreams of selling my art with minimal efforts. =P so here's art-biz philosophy 101 - as much as we'd like to think our art will just automatically draw people to us instead of going out and getting the audience, that is a big misconception. cuz there are tons of artists with amazing talent but whether you agree or not, u need the fans more than they need u. don't buy into the philosophy that if they want ur talent, they will come to u. because they won't. that's just lazy. they'll find someone with talent similar to urs who is far more proactive in gaining fans because of the simple fact that they know they're there and they will throw their money that way! Cheeks said something to me and theFranchize a month ago that still blows my mind right now. he said that someone told him "it's lazy motherf-ers like u that gets me jobs." so simple yet so profound. at that point i've decided that i didn't wanna be the lazy one but the one that gets the work thanks to those who don't feel like getting it.

so starts my new full time job with a more enlightened me. =D

i was working on some Pulp Girls sketchcards not too long ago and i just finished that a couple weeks before. i'm not sure if i can post much of it right now so i'll just post one of the 12 i did in the set. one of the downsides of working on these projects - u spend so much time working on them and u can't really show it online for a while so it seems like ur not doin anything. but i swear i am! =P i forgot her name already (cuz i suck that way) but she's a gunslingin cowgirl that wears very little. that's pretty much the idea behind most of the Pulp Girls stories. kekeke i'm going to start being a part of the Scoundrel.com sketchcard community so i can draw more for anyone that wants it. =D 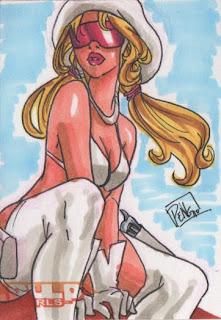 also, i've been asked to participate in a Voltron artbook produced by the same folks that i've been drawing these sketchcards for, 5finity. even though i remember so very little of the cartoon, i really wanted to be a part of the project. i just finished it the other night but since i'm probably not allowed to show it yet till the book actually comes out, i'm just posting the lineart. the colors u'll just have to wait and see in the artbook. =) 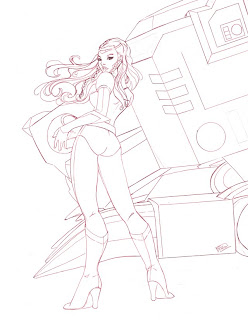 i forgot to mention that i got this pose from a great set of reference images from this person - http://mjranum-stock.deviantart.com/. i highly recommend taking a look at his pics especially if ur like me and believe that references are important. =)

congrats on the freelance part deux!

and best of luck! :o

and yeah, 5fin keeps a tight lid, so you can just show the 1 preview card for now...

YES! DUST BUNNY! thanx jason! =P i knew it had bunny in it but i didn't have the book around to double check since we're out of town right now. and i didn't wanna write it in case i was wrong. =/ glad u like it tho!!