(oz-MOHS) - to gradually or unconsciously assimilate some principle or object 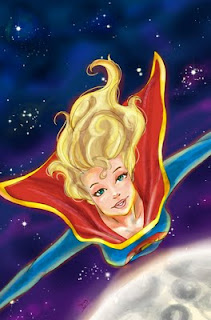 this is the latest cover for this month's Supergirl:Last Daughter of Krypton radio show cover for PendantAudio.com. in the story, her and Superman are flying in space and lands on the moon. i was very short on time (actually, we had to ask for a couple days extension) because we were dealing with a craptacular computer virus AGAIN. i swear, whoever makes viruses for computers should be punched in the junk daily as punishment for their crime. (unless it's a set of anomalies that happen due to internet info like Neo in the Matrix. then there's really nothing we can do about that.) so that set us back about a week of everything. =(
anyways, i didn't have much time so i'm not TOO too thrilled about the Supergirl drawing. i've never drawn anyone in this angle so i'm always self conscious about the way it looks. and yes, i know i broke rules when i cut her arms off. BUT, like i said, i just didn't have time. "space" looks decent though i think. again, this is my first attempt at space so if i had more time, i could really get into it. but i'm just so baffled at how pro digital artists make flippin nebulas and whatnot! everytime i try to think about how they do it, my brain bubbles into goop. it's just too much to process. (theFranchize used my idea for my cover to do his version for the cover of the Superman radio show since the stories are pretty close. u can check it out on his DA page.)

speaking of theFranchize, i'm SOOOOO happy to announce that he also got his Pro Badge for San Diego Comic Con this year!!!!! YAYS!!! i was starting to get a little worried since i got my approval a while ago. i can't tell u how many times i heard "that's great and all, but - why not him?" =/ well, maybe not quite in those words but that was certainly how it felt like to me. anyway, guess we're doin somethin right! =)