(LYT-moh-teef) - a dominant and recurring theme 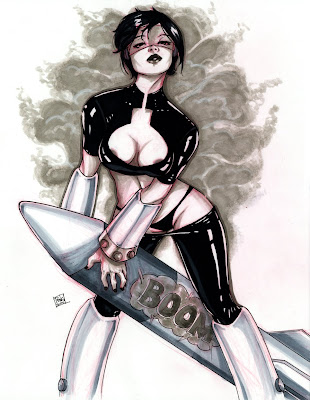 this is my Bomb Queen commission i recently did for the winner of an ebay auction i held. i didn't know about this character before but after looking up her vitals on comicvine.com (my GO-TO website for any comic info i need), it was clear that she's just my cup of tea to draw. =) didn't wear much, bad-ass, sleazy - what more could i ask for! this is one of very few inks-only commissions i've done and i decided to put a little extra juice into this one. thanks to Adam Hughes, who i have a love-hate thing for (i love his art cuz it's flippin amazing and i hate his art cuz it's flippin amazing). studying his art is helping me understand grays and heavy blacks in my artwork, particularly shiny leather stuff. again, i hate and love that guy's stuff. this is probably one of the best things i've drawn lately and i'm really glad that the guy i drew it for really liked it too!
in case u were wondering, i went from pencils, straight to the copic gray markers (both cool and warm grays), then finished it off with microns to ink the whole piece. the bomb she's holding is supposed to be some type of phallic innuendo of sorts. not sure it came across that way but even if it didn't, it's all good. it still fits. =P 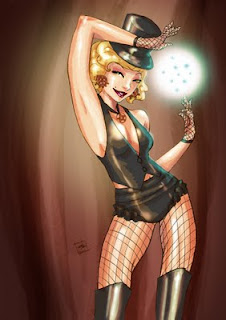 i decided to upload this also. this is the original colors i did for the Supergirl cover i posted the other day. i just turned it all sepia-ish for the final cover image to give it an old-time poster feel. but this was how it started out.

in other news, i'm trying really hard not to be too bummed about not going to Heroes Con this weekend. i know the other guys in the studio (with the exception of Domo who is actually going) have other things going on that makes it better for them to stay. and i know they were super-late in getting back to us about whether we had a table or not. but for me, i was kinda looking forward to it. i haven't been to a comic con since baltimore last year and i think i need to be in that environment. i mean, don't get me wrong, i love going to these pet expos. but not being around the comic scene is really doing a number on my confidence to draw comic-related things. i guess i shouldn't be too bummed since we are planning on going to the mother of all comic cons, COMIC CON! but still, it's tough to see fellow artists talk about their table numbers and books they have out. yeah, i'm hatin! so what! sigh.
however! my plans for this weekend is to try not to sulk too much and use it to be productive instead! i'm gonna turn this blog into some type of functional Peng-Peng Art website. so don't be shocked if u check back next week and some things have changed. =) so, here's to productivity!

I like the gray drawring!!! Looks good over the pencils... I think it would have looked cool too if they showed up more. I like the look of sketchy things. Glad the comissioner liked it! Who wouldn't!

Your words of the day/subject lines seem like jibba jabba... haha who would really use those words in a sentence, unless you were forced to. You should change it to something like: Avacado. "I took the bus today but avacado." bwahaha (I think the used to do that on some radio station)

Also, looking forward to your new site... how did you go about getting the domain to link to your blog? Gotta hook it up. And we need to hook up again. When are we going to all go to dinner as planned a long time ago?

kakaka yeah i know. no self-respecting normal person could possibly find a need to use these words in lieu of everyday vernacular. =P

got my domain from google. it's actually really easy and it's hosted by GoDaddy so it's only $10 a year. =D go to ur settings on ur dashboard, then publishing, and click on switch to personal domain at the top.

cool you will have to skool me on how you change up your layout! I keep it pretty simple on my blogs, not that I'm afraid to branch out, but it would be nice to know what other options are available!