[listening to "heartbreaker" by justin bieber] 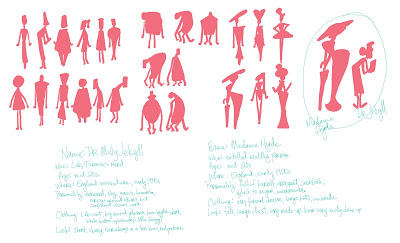 i've finally been able to get back into drawing after the holidays. it's tough to start up again after weeks of not drawing. i'm finally starting my online Schoolism class again. and since i'm determined to take the class seriously, i'm going to post my assignments on here to keep myself honest. i may not have the ability to take a real class at a real art school or up & move to california, but i'm gonna do the best i can.
so this assignment was to create Jekyll/Hyde characters and come up with silhouettes for each one. i knew that my Dr. Jekyll was going to be a mousy, smart, awkward scientist chick so that's what i was trying to come up with. in my mind, she's a lot like the Molly Hooper character from BBC's Sherlock series - hopelessly in love with someone who doesn't see her. but when it came to her Hyde counterpart, it evolved. initially she was going to be this dumb knuckledragger but it took a huge turn, possibly thanks to all the Downton Abbey i've watched lately. so now she turns into this busty, sexy, entitled bitchy woman - like a more intense Lady Mary Crawley (for anyone that watches downton abbey). she makes this concoction that she takes in the hopes to become sexier and more confident to gain the attention of her love interest as well as respect from others.
i'm excited to see if the class lets me explore these characters more.