[listening to the nightmare before christmas soundtrack] 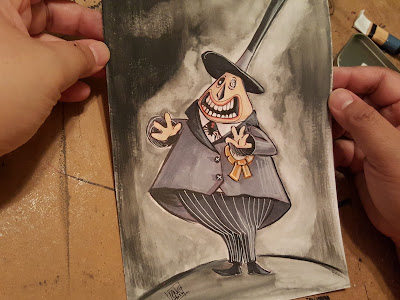 it's almost halloween! i'll be at Third Eye Comics in Annapolis, MD this Saturday Oct. 29th from 11am-2pm for their Halloween Comic-Fest! i love hanging out with the cool folks from the comic shop and they know how to throw a party for their customers. i've never done their halloween event before so i'm not sure exactly what to expect. but if it's anything like their free comic book day, it's gonna be fantastic.
i'll be bringing just a handful of my prints and comics. since it's a short day, i won't be doing any sketches at the event unfortunately. but come on by and say hi! i'll be there with my studiomate and BFF bryan "flash" turner to rep IDSTUDIOS!

this sketch of the Mayor from Nightmare Before Christmas was done last week as a cool-down from many consecutive days of trying to meet deadlines on other projects. i used copic markers, my brush pen, and a little black and white watercolor for the background. but it's really a reward for one of my Patreon supporters. if ur interested in joining us, head to patreon.com/pengpengart. i even have time-lapse videos for them.