[listening to "look what you made me do" by taylor swift] 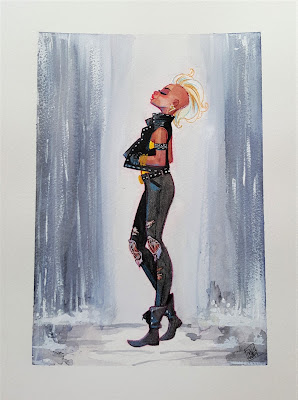 New York Comic Con is coming up so so fast. i haven't even been able to post about it. this summer went by in a blur. i blinked and it's almost October!

i drew this latest piece for the NYCC Charity Auction. i was struggling with what to draw this year and i went on facebook to ask people for suggestions. everyone came up with some super fun ideas, though some were more ambitious than i had time for. but Storm came at the suggestion of my mother-in-law and i couldn't say no to that. normally i go for the 90s Uncanny X-Men version of Storm because that's my personal favorite. but instead i went with mohawk Storm cuz i never draw that one. i drew her much younger, some time during her thieving days. i wanted to show a quiet moment where maybe she's just starting to really learn to control her powers and keeping herself dry while making everyone else miserable with a downpour. i'm not even sure that's how her powers work, but it's my drawing so i dos what i wanna dos. =) i did this with watercolors, a little colored pencils (for the lines and some blue spots), and gel pens for spots here and there.

if you're going to NYCC this year, please take a moment to go to the charity auction during the show and consider bidding on stuff in there. there's always awesome pieces (way cooler ones than mine) and the proceeds go to the St. Jude Children's Research Hospital. i think i may have been too late in sending my image to get it included on the online gallery, but it'll be there i promise.

i know this year, artist alley at NYCC is in a different part because where it used to be is torn down and being renovated. but, u can find me and hubby Jerry Gaylord at TABLES F25 & F26 in ARTIST ALLEY! i'll be bringing prints, a very limited number of my Daydreams Book 3, and copies of THE BLUEPRINT 2 as well.