[listening to "roulette" by katy perry]

so i'm finally all moved in to our new home in LA. still doesn't see quite real yet that we live out here, but with a view that includes the mountains and the peaks of Hogwarts at Universal Studios right out of my window - i imagine i won't get used to it anytime soon.

i have neglected this page in the past few months because of the move that i honestly don't know where to start with the posts. so, instead of trying to do some huge image dump from Awesome Con and San Diego Comic Con and other art in between, i'm just gonna try to move forward. if you've been following my instagram page - @pengpengart - then you're quite caught up.

i'll start with this mermaid painting from last month. i did it for my first-ever art show in LA. is that crazy!? well, it's crazy in my head. again, this is all part of the feeling like it's not quite real that i live out here yet. at any rate, this is one of the very few pieces i've done with only watercolors. (normally, i use copics, but i've noticed it's sort of my crutch.) it was part of the "Mermaids and Mer-Men Art Show" at the QPop Shop in downtown LA. the show just ended earlier this month. above is the uncropped version, below is what it looked like in the frame i had. unfortunately i didn't really get to frame it as nicely as i'd like because time wasn't on my side last month. next time i promise to make it much much nicer. (of course the pink watermarks aren't actually there.) 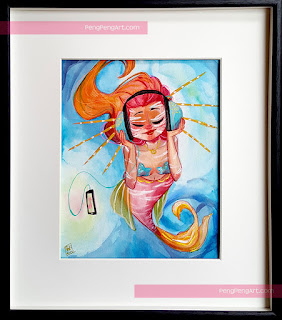 Wanna get ideas
from our URLs?