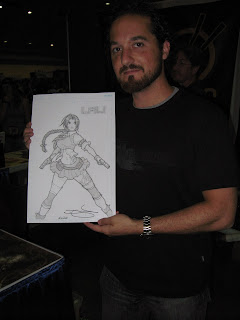 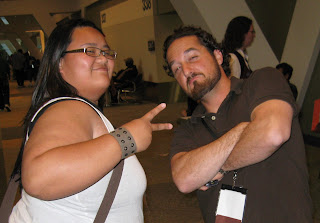 yep, that's the word of the flippin month kiddies! i don't mean to neglect my blog and even my deviant page. i would say i've been real busy but who doesn't say that, ya know!? i had a 7-day stretch at what is supposed to be my part-time job the other week and i was extremely exhausted by the time it was over that i'm still trying to relax at this point. i swear cleaning kennels and taking care of 30-60 dogs takes more out of u than it seems.
otakon was flippin sweet. got to get some super cool stuff and even purchase my first commissions done EVER! there were some extremely talented folks at artist alley this year and seeing as how i have a far larger appreciation for art i just had to get a piece or two of the greatness. but the coolest thing was that i got to meet one of the genuinely talented artists at Udon Comics Omar Dogan. i had him draw my character Lali for me and it was amazing to own an original! i don't want to get in trouble with legalities so i won't be posting a scan of it. but i will post a picture i took of Omar holding it! yay! it's frackin fantastical! we also attended a couple of the Udon panels and i really rather enjoyed them.
other than that, i've been wrapping up the project with the multiple random images i've been posting for a client's novel. can't even explain how exciting it is to have my meager artwork in someone's novel. i don't think i've even grasped the full breadth of being the artist for a book just yet. the hubby did some of them too so it's real cool to share the accomplishment. i've got a couple of commissions to catch up on, three of which are sketch cards on my Marvel Masterpieces Proof Cards that i finally received a couple weeks ago. got a couple of auctions up on Ebay for commissions and sketch cards and i've got bids on them already. so it's gonna get good and busy again. oh, not to mention i've still got 50 Marvel Masterpieces 3 cards to draw. eep! i better get crackin and i better make 'em good too cuz apparently Marvel's been rejecting cards like hotcakes! that makes me real nervous. they didn't reject any of my 10 from the previous set but now that i've got 50, my probability rate has just gone up! o.O hope its up to their standards. now if i can just bring myself to draw 50 teeny tiny cards. kekeke DUH! IT'S FOR MARVEL! of course i'd do it! ;P

now that i've seen your Lali, Mr. Omar's version is even cooler! erg, i mean cuz i get it now, not that his is better than yours or anything.... ^_^;