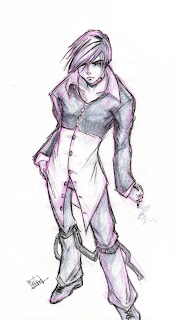 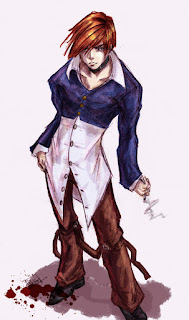 i just finished this week's ID Comic's art jelly of Fatal Fury (or King of Fighters or whatever u wanna call it). but instead of waiting till tomorrow to post it, i'm just doin it now. hopefully, fingers crossed, i'll be done with this doggy portrait so that'll be what i'll post up tomorrow instead. yay!
anyway, this is Iori whom i have no real info about. (sorry if i offend any fatal fury fighters.) it's not that i don't like that game or anything, i just didn't play it very much. but i did think this dude looked cool and i didn't wanna go the obvious route and draw Mai (the chick with the big boobs). anyways, i drew this with the intention of not having it colored. so i did some basic shadings much like that Copper Kid drawing i did. but after scanning it, i felt compelled to color it. so i just took a big oil pastel brush in photoshop and just went for what i knew. an hour and a half later, this is what i got. which is pretty fast for me cuz i take forever to color. i think i do ok when i draw dudes that are a bit on the feminine side. but i think i'm going to take these jelly opportunities to draw more guys to get a bit of practice. so please forgive me for some future failed attempts. =P i'm still learning. (^___^)
dunno why he's smoking. i don't smoke, i don't condone smoking. but i guess he just seemed like the kind of badass dude that would smoke after kickin ass. with fresh blood on his shoe and everything! i dunno. maybe i've just been readin too much Saiyuki.

These art jellies sound like a great idea....I definitely have to log back into DeviantArt to check this out...cause I wanna participate!!