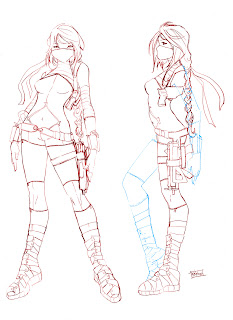 i meant to post this last night after i finished it but i got really sleepy after watching the Colbert
Report and shooting some covenant scum. so instead i'm posting this first thing on this work day.
this is my new design for our Brotherhood storyline's Lali character that i came up with. the story has evolved somewhat and there's going to be more violence and a fighting arena so i've decided to give her a "battle" outfit instead of her schoolgirl-assassin look. its more streamlined for easy maneuverability. it's most-likely gonna be all black since she's a sniper/assassin type and needs to be minimally visible. the new mask i gave her is to hold solidarity with Mr. Impossible which is theFranchize's character that he made up. not sure how or when, but they will eventually get together. she'll still have a regular outfit but i may tweak it to not look so schoolgirl-ish. now that Mr. Impossible has aged to well in his mid to late 20s, it's not so good to have him with a 16-yr-old. i've decided she'll be 20 and hence her clothes need to be age-appropriate. =P
her tattoos on her left leg and colors to come soon!