waiting for the end 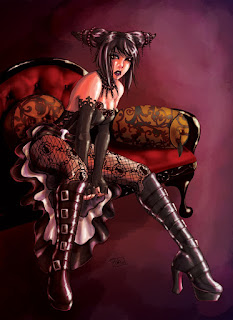 this was the piece i posted the face of a couple weeks ago. the client got it the other day so i can post it on here now. he loves the character Juri from the most recent Street Fighter and he asked if i could draw her goth while still retaining some elements of her character design - namely the spider-aspect of her name. now i'm not really goth or anything but i have really taken a liking to the style as of late. every so often i grab an issue of Gothic Beauty from the bookstore and i'm just so fascinated. when he asked me to do this commission, i was more than happy to oblige! it gave me an opportunity to live goth vicariously through it. =)
i was really pleased with how the piece turned out overall. i really liked the couch oddly enough. =P it took me a long time to get the lace and stockings right but i think it paid off. i've still got a ways to go with details like that so i need to practice more. i really played with the layer attributes and i added darker darks in this than anything i usually do. i've always had a hard time making my darks DARK. i think it's a fear that it won't look right so instead all my stuff looks washed out. it's one of the main reasons why i hate to ink my work. =( not cool. but i'm workin on it!