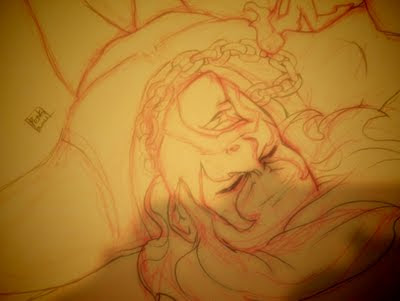 the first half of today i was finishing up my mini artbook. the second half is spent drawing this month's PendantAudio.com Supergirl radio show cover. this is a picture i took on my phone of part of the cover. i'll post the finished piece after they post it online next week.
as for my mini artbook, Mini Hot Cakes, i'm actually a wee bit excited about it. and normally i'm not cuz i tend to be my own worst critic. but i'm hoping it turns out as nifty as i think it will. it's gonna be small and thin (hence the mini part) but it's just the precursor to my actual artbook, Hot Cakes. i'll be bringing the mini book with me to San Diego and my goal is to get it in the hands of at least 10 very important people. whatever i have left over, i'll be selling at other cons or online, probably for $10. it's full colors all the way (cuz i'm not really a huge fan of just b/w lineart on my artbooks), 28 pages chock full of stuff i've drawn over the past couple of years. i have saved some art for my main book so there will be stuff in there that won't be in this one.

i got the email yesterday from New York Comic Con that i've been accepted to get a table in their artist alley! i'm superdy duper excited cuz we've been thinking about going there but money was just such a huge factor. and as i tend to come down really hard on myself, i really didn't think they'd accept my request. i mean there are tons of very talented artists that are probably trying to get in. i was very surprised they said yes. and since the husband, theFranchize, got accepted too, ID Comics Studios will be there to represent! =) with the news of our acceptance to NYCC, we've kicked these artbooks into high gear. it also gave me a little validity to what i'm doing which is important, especially when ur down in the dumps. basically, i'm glad to know i don't suck. =P i can't wait! the table cost is ri-donk-ulous and the hotel is probably even worse but we should reach an even larger audience there. gotta bring our A-game! we'll be playin with the big boys! ^__^