greatest love of all

sung by the incomparable whitney houston

just a moment to remember whitney houston who just passed this weekend. another legend has gone. my earliest memory of singing in front of people was when i was still in the philippines and i believe i was singing for my mom's coworkers at some function. i sang "greatest love of all" and i musta been like 5 or 6 yrs old. i used to sing to her minus one tapes all the time as a kid. (for those who don't know, minus one tapes are basically songs without the people singing in it for karaoke.) it was just sad the way things ended for her but i think i prefer to remember her as the woman with the voice unmatched by anyone. so as i write this, i'm listening to her greatest hits on spotify. 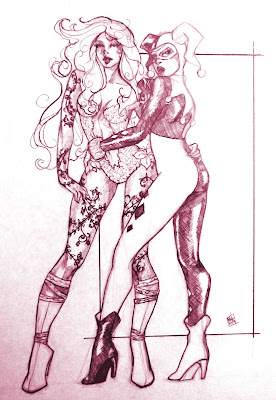 this is a commission i finished and i nearly forgot the picture was in my camera! i finished this before i finished the jessica rabbit & poison ivy ones. this is also for a repeat client but not the same from the last entry. =P i drew my first poison ivy that i used for my banner and a different harley quinn for him. this time he wanted them both in one. back in the day, i drew a poison ivy/harley quinn commission like this but it was a weeee bit more adult. but since then i've matured and hopefully my art has as well. so for this one, i wanted them to be somewhat friendly with each other, cuz let's face it, that's the real allure of the two being paired up. but i didn't want it to cross the line into naughty. plus i like drawin sexy ladies so thats usually what u'll get from me. =) this was drawn with my usual pink preliminary pencil sketch and finished in graphite. the client really likes pencil drawings. this image is just a fuddling of the picture i took. it was slightly fuzzy so i had to try with the little bit of photo-enhancing knowledge i had. 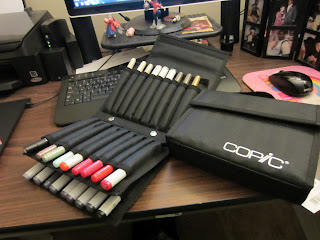 just came home from being at a Super Pet Expo in Edison, NJ and i was greeted by my brand new Copic marker wallets. =D u have NO idea how excited i am about them because i've been toting all 72 markers in my wonder woman lunch box. though it was a very attractive carrying case and caught lots of eyes, it just wasn't helping with me efficiently finding the colors i needed. i know its lame but i absolutely loved organizing my markers into them. plus i got my Breaking Dawn bluray in the mail too. but i won't get into that. ;P