we'll be setting up at Artist Alley this weekend starting tomorrow at Katsucon! it's at the National Harbor in MD in the Gaylord Hotel (i wish there was a relation between us and whoever that is but alas, no). if ur going, come find me and the other guys of ID Studios! we'll be the super cool folks. kakaka
i haven't been to Katsucon in many many years. it was actually my first ever anime convention i went to when i was still in high school. went with the art club as a field trip and i just felt like i belonged in that setting since. but once Otakon got bigger and bigger, and i got older and had less money to throw around, i had to limit myself to 1 anime con each year. hopefully, if all goes well at this show, i can make it a yearly thing. i've been to so many comic cons so i'm really lookin forward to being back in this setting. =) 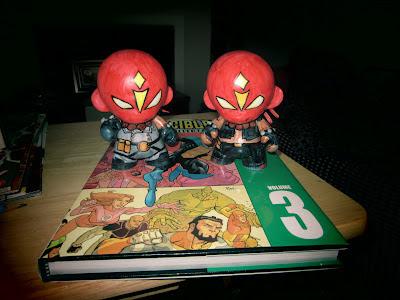 wanted to share this with ya'll. made it for the hubby for Valentine's day. he had to be out of the house most of the day for a storyboarding project so i took the opportunity to get these done. it's of his original character Mr. Impossible from our studio's own comic project "Brotherhood of Fighters." the black outfit is his usual outfit, the other is his alternate steampunk look. i think they came out so durned cute together! i used mainly prismacolor & copic markers with a little sharpie thrown in there. the studs on his gloves were done with my melted wax gun (like a hot glue gun but with wax sticks instead). the bandana tassels were taken off some old anime toys i had that were already broken. colored them red and hot-glue-gun-ed it to the back of their heads.
oh, and i also got him a new Invincible book. he's all about Ryan Ottley lately. 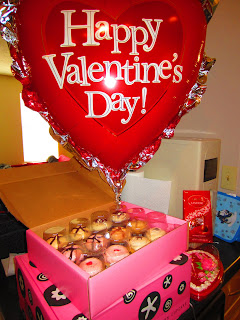 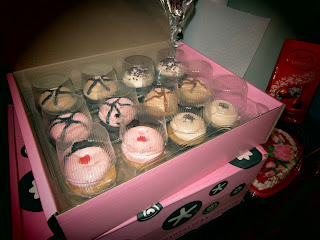 this is what he got me. giant balloon, georgetown cupcakes, heart cake, and my fav lindt chocolates. how sweet!! 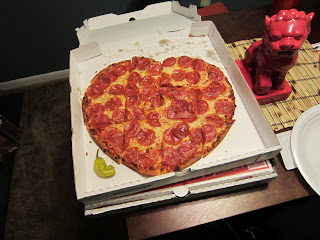 and this was our romantic valentine dinner. he got home pretty late that night so the only thing available was delivery. it was yummy tho! and quite fitting for us. =)