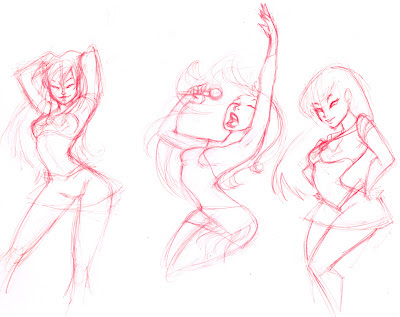 just found the Little Mermaid soundtrack on Spotify and i am eternally grateful. i used to listen to this soundtrack over and over again. of course, back then it was a tape so younglings have no idea how annoying it was to repeat/skip a song. music to my earholes!

this is what i'm working on now. after being at SDCC for 5 days, i was truly inspired by such amazing art and talent and the availability of it all. so i broke out an old sketchbook once i got home and just doodled. and as some panels told me to do, i am keeping the pictures inside of it a secret, much like a diary. but i started exploring a new style that i've always wanted to draw. thanks to one of my newest artbooks by the ridiculously talented Bill Presing, i'm trying to learn how to meld cute and sexy harmoniously. (if u don't know him, he's done stuff for Warner Bros and i think he's currently working as a storyboard artist for Pixar and such. but don't quote me on that. just google him. ;P)
anyways, i'm trying to come up with some new art for the upcoming anime convention, Otakon, this weekend. i know its last minute, but if i didn't do stuff last minute, what would i do?! =P just thought i'd share what i'm struggling with on my art table today.