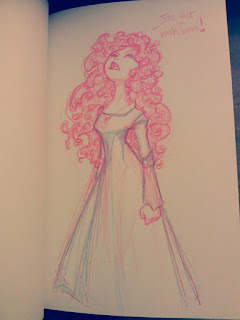 thank goodness for Spotify cuz i get to listen to Christmas music that i really wanna hear. not that the classics aren't good, cuz they're great. but no station plays the more contemporary christmas tunes.
at any rate, just a doodle that i wanted to share. i tweeted it the other week but forgot to post on here. i've been watching a LOT of Brave ever since i got the bluray and i just love love love drawing her hair. fun fact:hair is my favorite thing to draw.


also, theFranchize and i worked on a store-exclusive cover for the release of Supurbia #1 [written by Grace Randolph, published by BOOM! Studios]. the cover was for our local comic shop in Annapolis, MD called Third Eye Comics. because the subject and mood of the cover was more of my forte, i did the layout for the image and theFranchize drew it. then we did a collaborative effort on the inking and backgrounds. we actually did a signing at the comic shop on Nov. 3rd when it was released and lemme tell ya, it felt great! i could really get used to that kind of attention. =P plus we got to meet Grace Randolph who is quite the fun person to talk to.