[listening to "how deep is your love" by dru hill] 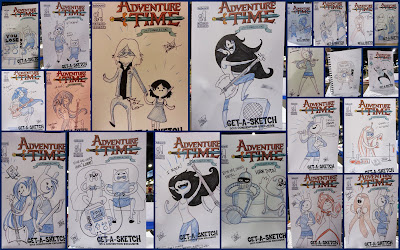 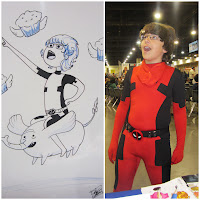 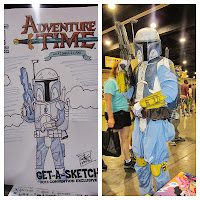 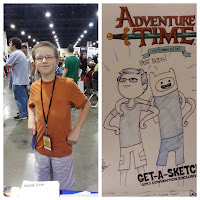 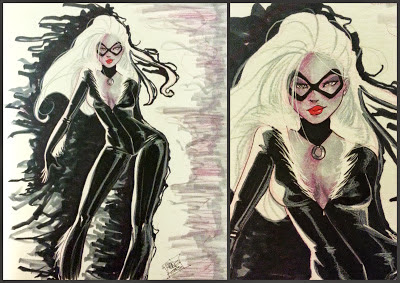 so now that i've been home for more than 3 days in a row, i'm finally able to update my blog without worrying about packing. =P it's been a crazy month. how crazy? i'm still stuck in April. i swear i just paid my taxes.
Heroes Con has come and gone. i drew a good amount of Adventure Time sketches at the Boom Studios booth. so thankful for all the folks that came by and got one done. had lots of fun after the show each night. got to hang out with some old friends, made some new ones. if there's one thing about Heroes that i enjoy, it's the post-con hangout!
i've made a collage of most of the Adventure Time sketches i did at the show. i don't really get the opportunity to color these sketches when i'm at the Boom booth because it's very much focused on volume of sketches. gotta make sure everyone that wants one gets one over the weekend. the b/w commission of Black Cat was a pre-con commission that was picked up at the show. i'm glad he was able to get it before the show because i definitely wouldn't have been allowed to do one at the booth.
this year the ID crew was spread all over the con center and i gotta say, i wasn't a fan of it. i think our motto has got to be "draw together - die together" and it was never more evident than at this show. even though my hubby, theFranchzie, and I were both at the Boom booth, we're usually sitting apart because he's drawing Fanboys Vs Zombies and i'm drawing Adventure Time. we're like the Light Vs Dark sides of Boom. then Flash was manning the actual ID Comics booth on one side of the convention while Domo was sitting at his own table with his Studio Revolver mates. it was weird, and not just for us. fans of our work were weirded out by our separation too. if i can help it, i wouldn't repeat this. i mean theFranchize and i sitting on opposite sides of Boom can't be helped, but having the other guys far from us was not ok.
anyways, there's lots of cool news happening to us as a studio. you can view that stuff on ID blog at www.identitycomics.com to know more about it! as for me, i'm feeling invigorated because of some new projects that has crossed my art table. now i hate it when people say "omg! i got some great news but i can't tell u about it yet!" so i won't do that. what i WILL say is, i love drawing for a living! and i'll try to keep making it worth ur while to keep tabs on me. =D

I love these! I bet it's a great feeling seeing your client's faces after they see your excellent work!