[listening to "scream my name" by tove lo] 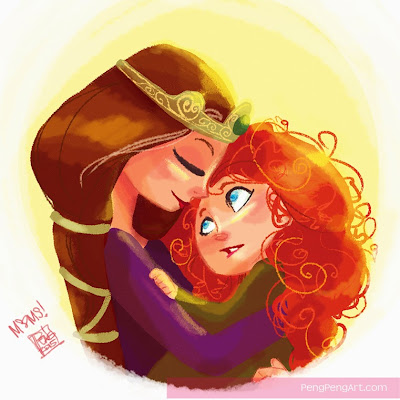 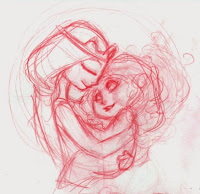 it was Mother's Day yesterday so i hope u all spent some time telling ur mom u love her. she should hear u tell her that everyday, but u must tell her on Mother's Day. it's the rules. (unless u have a complicated relationship with ur mom, in which case i'm not sure how to address that. so i'm just gonna blow past it.) in honor of Mother's Day i made a quick 1-hour doodle of the most mother-daughter themed Disney flick i know & love - BRAVE! well, there's Tangled too, but in a weird backwards sorta way. my mom & i rarely fight, and i don't really remember giving her much reasons to be mad at me when i was a kid (save for not cleaning up my room, like ever), so Merida's relationship with her mother doesn't necessarily apply to me. but i love the movie anyways.

MEND THE BOND. behind every fierce woman is an even fiercer mom.

so i sketch very loosely on paper with my red pencil, scan it, then go ham on digital painting. i had two ideas, but i thought the one with Elinor brushing Merida's hair wasn't the right tone that i wanted to show. so i went with them hugging. it's one of the sweetest moments in the film. plus i think kid merida is durned adorable.


In the first 1880s, the Methodist Episcopal Chapel in Albion reserve the second Weekend in May to identify the special efforts of moms. In its present form, Mother's Day was proven by Anna Jarvis by making use of John Wanamaker following a fatality of her mom, Ann Jarvis, on, may 9, 1905. The state service was on, may 10, 1908, and another year your day was reported to be extensively celebrated in NY.
Mothers Day Images 2018 HD
Mothers Day Poems That Make You Cry

It is a good site post without fail. Not too many people would actually, the way you just did. I am impressed that there is so much information about this subject that has been uncovered and you’ve defeated yourself this time, with so much quality. Good Works! mothersday ideas 2019

After reading your post about mother’s day, I am thinking to close my work on time and spend these special and precious moments with my mom. Along with that, I have created a special painting for dedicating to my Mom. Essay Writing Services

Hey guys! I really know that all of us know how to write! But if you want to write something good, you always need help! If you didn't want writer personal statement to spend a lot of money and really want to make it good, you can ask this guys for help and text to them paper writing services and be ready for fun! Good luck guys!

The day is very special for us. They shared how to spend mother's day. I like this article. Keep sharing your content with us. Now it's time to avail Diy Shutters for more information.

I read your content. This is really great work on mother's day. Keep it up. Now it's time to avail Signature Shopfitters for more information.

I am very happy to read this one. This day is really important for everyone. Thanks for sharing this blog. Now it's time to avail HYDRATING SUN SCREEN LOTION for more information.