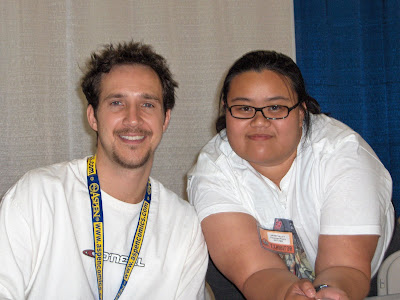 it seemed only fitting that i would put something up about Michael Turner. after all, he was one of the key influences in the way my art looks now. i am a big fangirl of his stuff and i'm not even ashamed to admit that. i heard about his death at the bar last friday night at Wizard World Chicago that we just came back from. it was the saddest thing i've seen as tears welled up in people's eyes. a little welled up in mine too which seems silly considering i didn't even know the guy personally, but i guess that's a testament to his personality. u meet him once and he leaves u with the impression that he is utterly grateful for having met u. he's probably the only popular artist that was more than happy to sign stuff for his fans.
i got to see him once at Wizard World Philly in 2005. i nearly didn't even go to see him because i was chickening out as i tend to do. but luckily, jerry made me go and went with me. when i got up to him to get my books and my cellphone signed by him, he had the biggest smile on his face as if i was the first fan he had seen all day even though i must've been the 300th fangirl with a big cheesy smile. he was so flattered to sign my cellphone because i showed him that i had one of his posters as my wallpaper on it. (yeah, i know, nerdly.) then he chuckled and showed me that he had another one of his posters on his cellphone's wallpaper. coolest thing ever. he was happy to sign my phone which is stashed away somewhere in my endless boxes. i never threw it away but the signature was definitely starting to rub off. i guess permanent ink doesn't really mean permanent. -___- it is so inspiring to know that he genuinely enjoyed meeting fans and that he would rather suck up the pain of his cancer treatments to see them than sit at home feeling sorry for himself. if only more famous people treated their fans with that much respect and gratitude. after all, what is a famous person without fans??
he will continue to inspire every young kid who needs to learn how to put just the right amount of flare with his/her anatomy. he can show them how to draw some of the most beautiful women in comics without being over-the-top with "endowments". and he will always remind me of where i came from and how i got here. he was the second artist i've ever been able to distinguish among comic artists back when i was just new to the game. [the first one was joe madureira.] i tried to pick up as much Michael Turner books i could get my hands on so i could learn how to draw better. then Aspen came out and i started on Soulfire just because of his art. i didn't even care what the story was. but by then i think he had the cancer and the issues were few and far between. still picked it up whenever it came out though.
recently read some of his interviews about how he could barely sit down to talk because the pain was too much. i remember reading one that said he continuously shifted and moved pillows around his back and legs throughout the interview because of the pain. knowing that gives me a little comfort that he's no longer suffering. as a tribute, i'm posting my first Grace drawing i did back in 2005. this drawing was ground-breaking for me. before, i would just draw anime characters and chibis. but after this one, i knew i was going somewhere with my style. i started using his style to blend with the little bit of anime knowledge i did know. the eyes i draw now are from learning his art. from this i drew Kasumi which is a print now and then i drew the still-popular Chun-Li that continue to sell very well at cons. i never did have the guts to show him my Grace. thought he would've laughed at me when he got home. 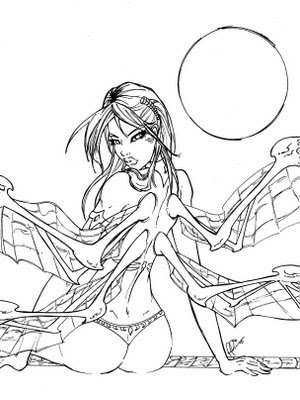 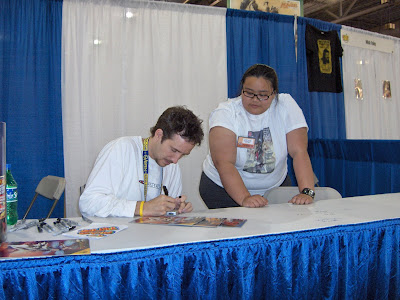