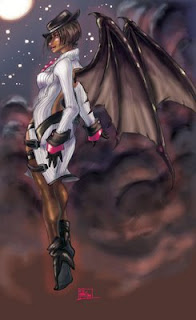 yep, i just finished cooking this up last night. i think it came out surprisingly well, especially the wings. the sky was a brand new attempt for me. it was inspired by a similar sky look on a Kim Hyung Tae piece in one of his Oxide artbooks. of course, my sorry first attempt to achieve the look is very very far from his immense skills but i'm learning!

i used one brush to color the whole thing. after flatting the figure, i created the sky and gave it the colors i wanted. used purples, blues, and oranges. the moon and stars were on a separate layer set to Color Dodge as i "painted" them in with an orange color. used a star brush to place my stars and then took my initial brush to add to the "glow" of them. used some light blue highlights on the clouds closest to the moon. the eraser came in real handy with the clouds. (the eraser was set to the same brush as i was using to color.) then i went and fleshed out the figure using the same color palette. i really liked the wings. initially i was going to give them a rougher texture but then it just morphed into something a little more slimy and i liked it a lot! so i went with it. used some bright pinks to pull out spots. then i gave the figure an all-around glow to give her a more supernatural feel.

the customer liked it, i liked it. it's really a win-win situation. i hope to do more things like this so don't be surprised to see this type of cloudy sky in other pieces that i do. =P