...by michael jackson (if u didn't know that, u should be slapped silly) 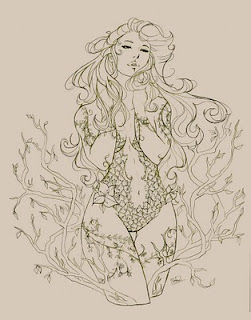 i just realized i never posted the poison ivy pencil commission i did that i'm planning on coloring this week. it's for the same guy i drew the harley quinn for. i have the Tattoo Life and Gothic Beauty magazines to thank for inspiring the piece. i'm neither tatted up nor goth but i do like their styles. the tattoo magazine really gave me a lot of inspiration on the leafy/viney patterns on her and the gothic one just gave me the mood of it with the branches growing out and stuff. if i had money to burn i'd probably subscribe to both magazines just to be inspired - but i don't. so there's that.
ended up working on my dad's church flyers and stuff tonight so that's one night down that i'm not coloring this piece. we'll see what happens tomorrow.
did anyone else see Zombieland?! that's some funny stuff. i especially liked the way the Rules popped up on screen when they applied. my favorite being Rule #2 - Double Tap. cuz u really shouldn't be stingy with those bullets. except in CoD:WaW zombie levels...but that's a whole other topic altogether. =P

WOW!! I already commented on your DA, but this deserves more props!! I REALLY love this. Seriously, I am now thinking of a "motherhood" theme tattoo (instead of a muse) but I don't know what of...but I want you do design it! heehee

You know, I think I stopped checking your blog for a while since you hadn't updated it regularly... (last one i read was the Red Lantern post) Update more! :)