take my breath away 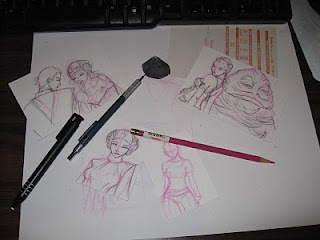 it's been quite snowy around where i live. i think we've had a total of 32 inches or something absurd like that with more to come, apparently. and yet i find myself unable to be snowed in like most normal folks thanks to my job at the dog boarding kennel. i've only managed to miss one day of work due to the snow and that was only because the guy that was assigned to pick folks up in his 4x4 truck actually said it was far too bad to drive out there. so i had a free snow day! i swear if i didn't care about these darned dogs so much i may have protested. =P
at any rate, just a quick update here. i'm currently working on some sketchcards for a charity and out of the subject matters they said we can draw, i chose Star Wars (cuz the others i didn't know =P). so here are a few so far but they're not finished. i plan on inking and graying them. once i get approval, i'll post them finished. i still have a few more that i haven't even started yet. but i plan on being done by this weekend so yay!
oh yeah, did i forget to mention i don't usually draw star wars stuff?? i'm really tired and my motor functions are a bit fritzy at the moment so i hope when i finish these, they actually look as good as i'd like them to. if they don't - ah well, happens to everyone. =) just kidding. (kind of.)