[listening to "bittersweet" by ellie goulding] 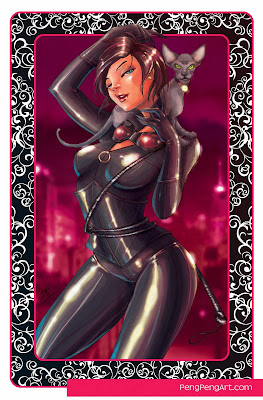 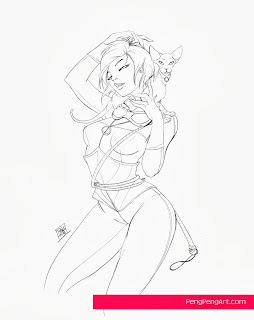 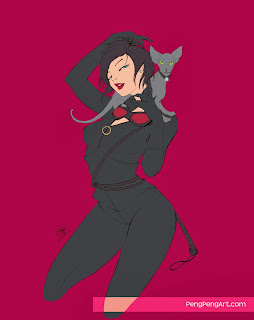 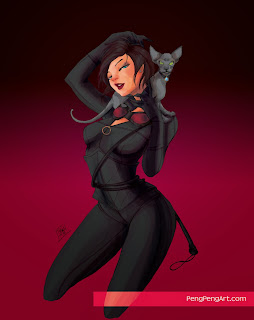 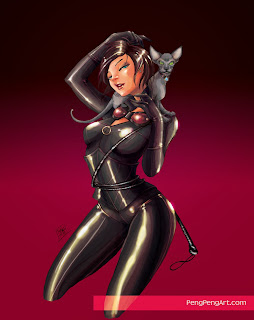 like i promised last week, i said i would show my newest Catwoman piece! so here she is! she completes the Sirens set with Poison Ivy and Harley Quinn. i won't have smaller 6x8 versions of her until next year to go with the other 2. we already finished our print order for the rest of the year so =(.
just like the other 2 ladies, this is my take on the character. originally i wanted to draw my favorite Catwoman version - the Michelle Pfeiffer one. but thought better of it and was afraid folks might not like it so much. so instead she kinda looks like her current iteration with a little Pfeiffer influence on her costume. so much like the other 2, she looks like the current version but with some slight modifications.
normally i see her drawn with a nice fluffy black cat or an even fluffier white cat. but i chose the Sphynx cat because i think people who are really into cats really like some of the unconventional breeds. i've always felt like there's a definitely ICK factor with hairless cats. they kinda look like aliens! but i've been following Kat Von D's instagram lately and she has a sphynx cat named Piaf. she finds this cat to be beautiful and mysterious and i figured Catwoman would probably think the same thing. cuz let's face it, when u get right down to it, she's a crazy cat lady. ;P

now the process is pretty much the same as my usual drawings. this time, i decided to take a photo of a city - this one being NYC - and fuddling with it to turn it into a background. i've seen some articles on this trick in my ImagineFX mags and decided to give it a go. i think i like the way it came out! same deal as the rest, went from my pencils straight to digital painting. started with flats, went to shadows, then highlights, then special effects-y stuff. everything was done on photoshop. oddly enough, i think my favorite bit of this piece turned out to be the cat. go fig! (cuz i'm a dog person. =P)

on a more somber note, today i remember, much like thousands of others, where i was this day 12 years ago. it was a tough thing to wrap my mind around when it happened, still a crazy thing to accept. while i am extremely grateful for not having lost anyone i personally knew to the tragedies of that day (and many days following), i pray for those that were not so lucky. never forget - 9.11.01