[listening to "thank god i found you" by mariah carey ft. joe and 98degrees] 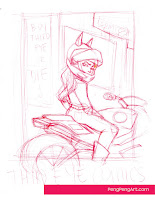 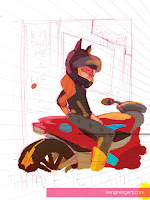 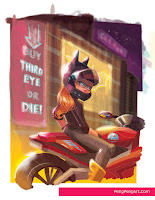 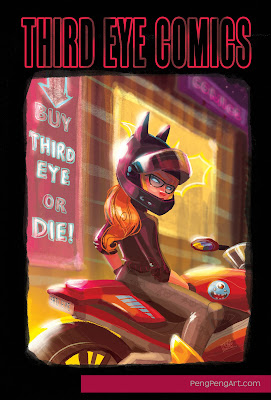 i was asked to draw another tshirt design for my favorite comic shop in the world - Third Eye Comics in Annapolis, MD! i'm starting to think they really kinda love me or something. ;) which is totally cool cuz the feeling is mutual!


they're hosting a Batman Day at their shop on Sept. 26th and they wanted their new fall shirt design to echo the day without breaking any licensing rules. so they asked me to draw their shop mascot chick (who i drew last time i did a shirt design for em) in some type of bat cowl like in Ghost World. so i did a bunch of sketches that had her wearing it with plain clothes. but then i saw this super dope bat-helmet that Babs Tarr (Batgirl of Burnside) posted on instagram & i decided to sketch that one. turns out that's the one the shop liked! who knew! i was heavily inspired by Mingjue Chen when i painted the final piece.

like i mentioned, she's their mascot. she's NOT Barbara Gordon. it just happens that their mascot is a redhead. but she wears glasses!

i'm so honored that Third Eye trusts me to represent their brand. they say folks really liked my last design so they had to ask me again. my lack of self confidence won't allow me to believe that BUT i guess i don't suck so that's a good sign. =) can't wait till i get mine!!!