[listening to "alone" by heart] 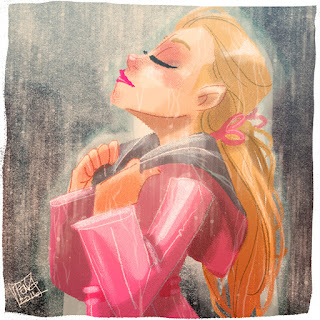 just wanted to quickly share with you guys a couple of things. first, i drew this for the Girls Drawin Girls group that i'm a part of. this is for their facebook page's april profile picture. when i drew this, it was really rainy off and on so i thought it was appropriate. plus, april showers and all. i went for a more dramatic scene than a cutesy one this time around. i don't know why, i just did. this was done completely digital on photoshop. it took me maybe an hour and a half to finish it. getting the rain to look right probably took up like half an hour. it was either too much or too little. but i'm happy with it now. 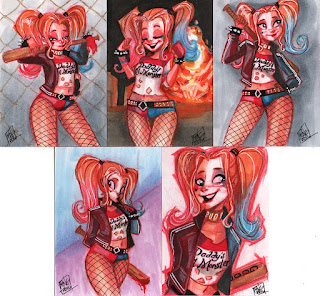 i don't draw much sketchcards any more these days but every so often i'll do some charity cards for 5Finity Productions. the proceeds go to the March of Dimes so i decided to pick a topic that's fairly popular as of late. so, Suicide Squad Harley Quinn it was! i didn't like her outfit for the movie before, but having draw her 5 times, it kinda grew on me. all of these were done with copics, colored pencils, and inks and they have all been sold already.