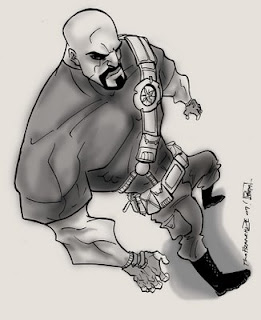 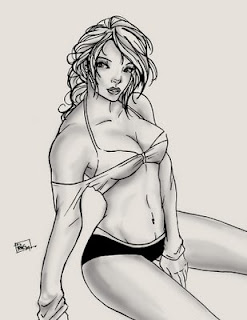 i just finished these inked commissions. i placed an open call to folks on deviant for an inked commission in exchange for a year's subscription to deviant. of course, peeps came through for me again. gotta tell ya, folks on there are just so supportive! so for one of them, he wanted me to draw his character Turbulence who is this muscly dude. i didn't want to disappoint him with my somewhat femmy-lookin dudes so i offered my very talented husband's talents with my inks over it. so that's why it doesn't look like i drew it. =P the other one is this other guy's original character named Amazon. i usually don't gray my inked commissions but i kinda liked how the Amazon one came out and felt it could use a little shadows. so i did it digitally. =) and since i did that one, i went ahead and did it for the guy drawing too. i just took an airbrush with some dark gray color, set the brush to "multiply", took the opacity and flow down to the low 20%s, and made the brush size really big. then i just went for what i knew. ^___^

nice drawings! and shadings! the first one looks like bishop from x-men a lil bit. :)

i am afraid to get street fighter. how are the achievements? are the easy to get? well, i'm only afraid because I will suck at it at first, so I will want to keep playing it to get better, but then I will be so involved with that, that I will neglect my work and that would not be good! heehee

yay! thanx, i see u guys are gettin the new website together, lookin REALLY cool, i like the layout better that the first one too! i can't wait to see it when it's done!