i tried to think of a song fitting for this Leap Day but that was the only one i got. still a very entertaining song, in my opinion.

despite how busy we've been lately, i knew i had to post today so i can see if i'm still doing what i do next time Leap Year comes around. i have zero recollection of other leap days and i've really been struggling with my memory as of late. SO - to my 4-yrs-into-the-future-me, just to remind u of what u were going through right now, here's a summary.
enough of me addressing my future self. now to address the present. =) 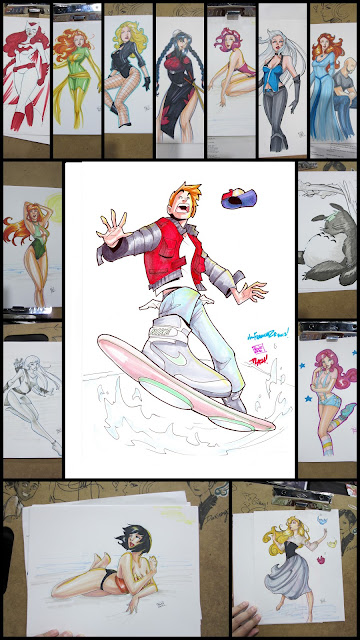 here's a collage of the commissions i did during Katsucon a couple of weekends ago. btw - nobody told me Picasa makes collages in a jiffy! had i known that, i'd have been doing this instead of uploading all these images separately. this is why i need a lackey! =P
these were all done with inks and Copic markers for the most part, with some Prismacolors and Sharpies thrown in there in spots. i got a couple of neat requests like the Sleeping Beauty and a human-form of Pinky Pie of the new My Little Pony cartoon. any excuse to draw Disney princesses and My Little Pony are always welcomed! i'm finding myself with an easier time coming up with poses on the spot than ever before. i think it might be cuz of all these sketchcards i've been drawing. but it's so liberating! i use to have to take a deep breath, break out some reference materials, and find one that's fitting.
the center image is my favorite one tho! (if that wasn't already obvious with its placement and size.) i didn't draw it, mind u. i DID color it tho. someone asked us to collaborate on a cool Marty McFly piece of our choice and we couldn't be happier to do it. i have been really into some Back to the Future lately. i've always loved all 3 movies but lately cable has been showing lots of it and i can't help but watch it every single time. then we got the 25th anniversary set on Bluray and i heart it even more! anyways, so theFranchize laid out the scene with pencils, Flash cleaned it up with inks, and i threw my colors on it. the scan that the dude sent us is a bit light on the colors (like his jeans were more blue and his Nikes were more gray, and u can't even make out the greenish glow of the Nike logos) but we were just happy that he sent it to us. on a few occasions, we draw stuff that we'd rather keep for ourselves and this was one of them. if we had more time, we woulda thrown the clocktower back there with Griff and his cronies as well. =P and if there are any Back to the Future II enthusiasts out there, we did have a debate about whether his shirt was white and burgundy but we couldn't remember so we kept it white. of course, now we realize it was burgundy and his son was wearing the white shirt. d'oh!
i think it's also worth noting that someone asked me to draw a Totoro. and i thoroughly enjoyed it. =) 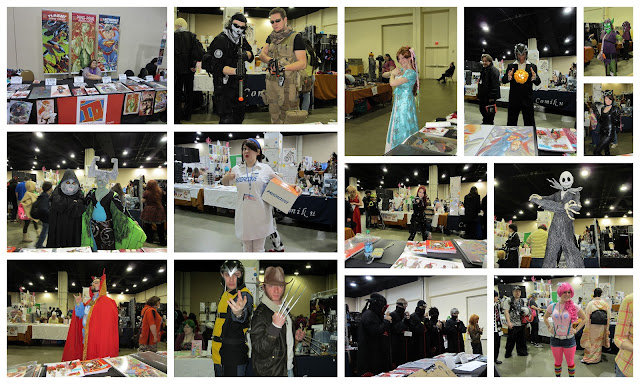 this is a collage of some of the cool costumes that were there. gotta love these anime cons! they have THE best cosplayers ever. way better than comic cons. in my opinion, most clever goes to Flo from Progressive. where did she get the box?!?!
i'd like to note that i absolutely enjoyed myself at this con. not only was i among my fellow anime-heads, but anime folks in general are so much more genuine. if they like ur art, they have zero hesitation about expressing it. and if they really like it, they're not embarrassed to pronounce it with excitement. it's a fantastic energy and i want more!! =D i remember when i went to my very first anime con, which was Katsucon, and i saw pro artists drawing behind their tables, i knew one day i wanted to be on that side of the table. i remember vividly this one guy drew a quick anime dude face in blue pencil and gave it to me for free and i was so taken aback by how cool it looked and how quickly he achieved it. its amazing to see that reaction from others now when i do that. lets me know i'm doin somethin right. =)

(my bad I had a major typo)

Ah yes... the first con... That was back in the days where you were not behind the tables, but in front of them stealing stuff from them!!! LOL Bwhahahaha!!! I think the Picasa collages are cool and all, but I don't like how you can't zoom in on the little pix!! I love all your commishes together... the colors are really nice!! Funny how based off your pix, I wouldn't have known you were at an Anime con... Progessive lady Flo?? LOL Ooooh... did you see any Katniss cosplayers?!?! Or gotten any Katniss commission requests? I would love to see your take on those characters. Anyway, happy Leap day!!!