[listening to "back and forth" by aaliyah] 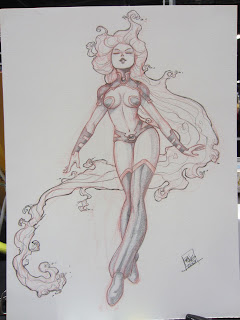 i was hoping to recap our time at C2E2 last weekend but time just keeps running away from me! i wanted to make a collage of commissions i did and cosplayers i saw. it was gonna be cool. but instead i find myself with very little time each day. it didn't help that i was super exhausted all week cuz of the insane back-to-back cons we attended. the recap will have to wait.in the meantime, this is my favorite sketch from the con of Starfire. it's not often my commissions make me go "huh, that's pretty dope." but her fire hair did. =)

FREE COMIC BOOK DAY IS TOMORROW!!! ID Studios and i will be at Third Eye Comics in Annapolis, MD tomorrow for their FCBD/5-Year Anniversary block party (not really a block party - it's just gonna seem like it cuz of all the people there). they're gonna have incredible guests (including us, of course) like GAIL SIMONE (yes, that Gail Simone) and Cullen Bunn. they're gonna have one of those photo booths that looks like a Doctor Who phone booth along with a TARDIS. now i'm one of very few people that don't really watch Doctor Who, but i've seen plenty that do and i know they'll flip their lids when they see those things. and they're even having free food from Applebees for any that attend! now that's just ba-nay-nays! so come on out and see us! we'll have everything we usually bring PLUS theFranchize's Awesome Con exclusive cover for Regular Show #1 (colors by Lauren Affe) with space in the back for a sketch. awesome!

see u all tomorrow!!!