[listening to "spaceship" by justin timberlake] 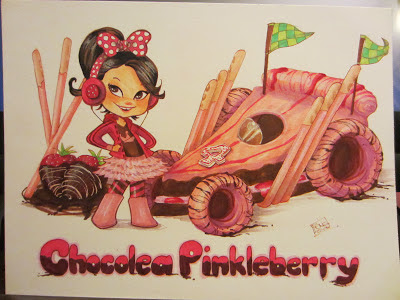 this week is such a short week and i'm trying to get everything done basically in 2 days. because we are leaving for WIZARD WORLD PHILADELPHIA on Thursday! we will be set up in Artist Alley at Booth 2210 so if you're going, come on by and see us! we also have a panel called ID Comics Studios: How to be a functioning studio that will be run by theFranchize and Flash. it's on SATURDAY at 5pm in Room 111. this will be the first time we'll be doing this panel at this show so it's all super exciting!

amidst all the hubbub, i managed to draw my little niece, Lea, something for her birthday. she's 4 today and she had a princess party this weekend. she loves Vanellope Von Schweetz from the Sugar Rush portion of "Wreck-It-Ralph" and she apparently rides around on this little car in her living room singing the Sugar Rush theme (as best she can, anyway, since it's in japanese). her mom (my sister) asked me to turn her into her own Sugar Rush character and i gotta say, it's one of the best original pieces i've done lately. (it may have something to do with the fact that i've been looking for any excuse to draw Sugar Rush stuff already.) it's drawn on a 9x12 Canson Watercolor paper with copic pens and colored with copic markers and some white colored pencils, then matted and framed it to 12x19. i turned her into CHOCOLEA PINKLEBERRY, complete with a chocolate strawberry cake and strawberry pocky race car! (i know the cake looks more like a pie, but whatevs.) i got her those Minnie Mouse headphones as part of her bday present to tie it all together. she seemed to really like it cuz she's asked her mom to make her look like her Sugar Rush avatar. =) all i know is, she's definitely all set with the pink tutu. and i had quite the fun time with the chocolate drizzles!

What are the colors you used for the character the types of pink and browns?