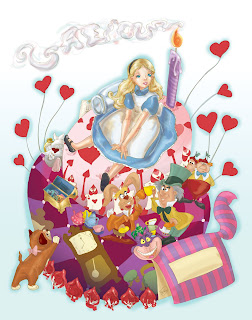 now that Baltimore Con is done, i can finally post those commissions i couldn't before. =P the first is a commission that someone got for their friend as a birthday present. she apparently really likes Disney princesses so he asked if i could draw a disney princess on a cake and have it say "happy birthday ___" somewhere. (i'm omitting her name for privacy's sake.) i know Alice isn't a princess but he gave me the thumbs up. i really wanted to do a nifty topsy turvy cake (guess i've been watchin too much Fabulous Cakes on TLC) and it would really fit Alice in Wonderland better than others. he also chose it to be more cute than sexy so this was what i came up with. i went a weeeeee bit overboard with it though. i think i was havin just a little too much fun while drawing and it got more and more massive. if i could've squeezed the caterpillar dude somewhere, i would've. but i got his smoking AEIOU in there. =P (the happy birthday message went in the blank spot on the Cheshire Cat card.) 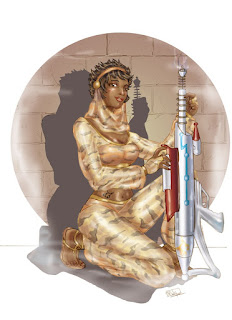 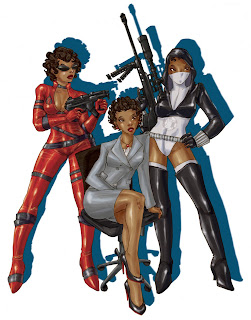 these next ones were for one of my very loyal repeat customers. he's got a lot of stories he'd like to see come to life so me and theFranchize have been doing different pieces for him over the span of maybe 8 years now. wowsers! and i guess we're just lucky he hasn't gotten tired of us yet. OR that he's not upset at all that my style has changed quite a bit in those years. anyways, these are of 2 characters in his latest set of stories. both characters are based on 2 real women that he knows.
the first one is Mysti - yes she's got a giant ray gun. =) and yes she's got a genie-type outfit but with cammo print. everything about her were specific requests of the client and i just try to visualize it for him as best as i can.
the second character is Ms. Stake and has 3 personas. the ninja-lookin version with the hood is a secret identity so ur not supposed to know its her. after i drew this, he told me that my design and the fact that i chose to color her black & white made her look similar to a Birds of Prey comic villain named White Canary. believe me, i had NO idea this character even existed so any similarities were utterly coincidental. i just made her colors black & white cuz 1) she's got a rook as a symbol on her tummy and 2) i didn't think colors would lend itself well to her bein a ninja and all. i think i was mostly tryin not to make her look too much like Kitana/Mileena from Mortal Kombat. =P

and in case ur wondering, i use a LOT of references for poses and things cuz i feel my stuff is far more accurate when i've got models and things. but since i don't have sexy ladies at my disposal, i use stock photography. specifically from this guy's gallery - http://mjranum-stock.deviantart.com/. u'll need a deviantart account to view most of his stuff but it's a wonderful source. i highly recommend. =)

[feel free to not bother reading the stuff below. i'm just gripin about me bein sick lately.]
so i've been pretty durned sick for the past week and have lost like 5 lbs in 5 days thanks to my inability to eat much of anything except soup this whole time. and though i'm excited about losing any lbs at all, it's probably not a good thing to lose so much in such a short time. since i've got no insurance, i'm really not tryin to go to the doctor's cuz i've been down that road before. still payin off stuff right now as it is. hundreds of dollars so a doc can stick a light down my throat and tell me it's swollen. yeah, i sorta figured that out for myself doc, thanx. anyways, i'm hopin it'll go away after some time. with my trusty WebMD app on my iPod, i'm thinkin it's either strep or tonsillitis. either way, it should go away after a week and a half (supposedly). meanwhile, i take lots of motrin to keep my fever in check and the pain from swallowing at a manageable level. soup and popsicles are my daily diets so i'm pretty weak throughout the day. i really REALLY miss my coffee. but time is my only friend at this point. and nyquil - i love u!

sick? nooooes!! how do you get strepp when you work from home? Don't you need antibiotics for strepp? anyway, i hope you get better and just take it easy.

OOOH!!! Alice in wonderland!!! cute!!! I was wondering what that "aeiou" was at the top... it reminded me of the secret "SEX" dust cloud in the Lion King!! hahah