[listening to "Stronger" by Kanye West] 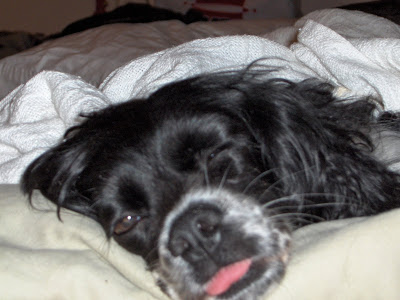 (a pic of Chauncy taken 3 yrs ago)
this is EXACTLY how i've felt all week in preparation of my birthday
yep, folks, i'm an hour away from my 30s and i'm really not feelin too chipper about it. in preparation for my PRE mid-life crisis, i've done absolutely nothing of any import at all. cuz it's my berfday and i'll cry if i want to!
however, through all this sulking and dreading, i've managed to be a little introspective. with the help of my hubby, theFranchize, i've come to realize that the 30s come with some perks.
of course, turning 30 brings lots of crappy stuff too. but i won't get into that cuz frankly, it's a much longer list. kekeke i mean, at this point in life, i think it's safe to say if i do something stupid, i'm actually TOO OLD to be doin it.
u may be asking urself, "30 doesn't seem so old to me. what's the big deal?!" or maybe ur sayin "damn, ur friggin old." either way, the reason i'm calling my birthday "Doomsday" is simply because i remember being young and looking at my teachers thinking "ur old!" and yet i know people that are teachers now or used to be teachers at one point. last night in the weeeee hours of the morning when i couldn't fall asleep, i decided to IMDB the cast of Glee and the Glee teacher-dude, Mr. Schuester (who, btw, is a hottie!) is actually only 2 years older than me!! and yet he seems so much older to me!!! WTF!
so, even though i'm kinda over the whole "it's ur berfday, let's get frackin drunk!" stage (which is completely on a personal level and in NO way judges anyone that likes to drink some DRANK to celebrate), i would like to raise a hypothetical drink to my 20s. thank u, 20s, for teaching me some very important lessons like just because i'm out of high school does NOT actually mean i'm grown. thank u for the ups and the downs. thank u for the loves and the losses; the wedding; the girls Krypto & Chauncy; the epiphany that i actually wanted to be an artist. and with the passing of the 20s, i welcome the 30s with (an imaginary) shot of something really strong! i look forward to the new opportunities it brings - new places, new family members & new friends, new bills (cuz that's inevitable), and (dare i say it) possibly a child spawn from me someday. watch out world - when that day comes, it means peng's finally stopped being selfish. which REALLY means i'm no longer the peng u knew & loved. =P

i wish i had drawn something new or amazing in preparation of the eve of "Doomsday." but like i mentioned before, i've spent these last few days doing nothing but whining to my hubby about how old i'm gonna be. so, sorry i have nothing cool to show. =( but on the PLUS category, i think i'll spend my remaining moments of my 20s layin on the bed with my pups in my pjs and ring in my 30s with lots and lots of Halo games. =D cuz at this point in my life, all i truly know is that i'm a big nerd and there's really no point in denying it anymore. (hey, isn't it better that i spend my negative energy about turnin 30 into something virtually cool like video games instead of doing something actually stupid like drinking till i make a boob of myself in public or perhaps calling people in my drunken stupor saying things i really don't mean?! EXACTLY.)