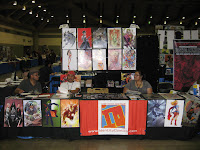 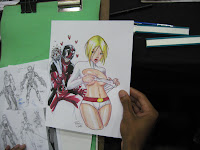 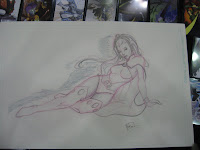 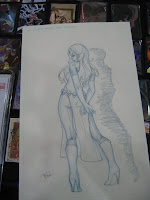 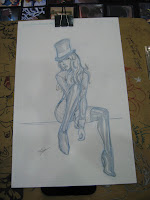 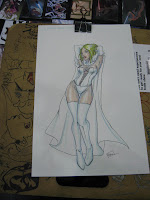 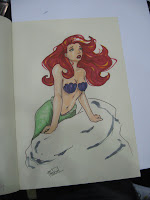 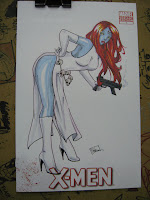 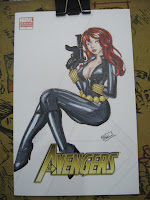 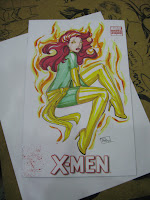 so baltimore comic con this year was flippin fantastic! despite my reservations about the table spot, it turned out to be a big success for all 5 of us there! we all got way more commissions than we could handle but i did manage to finish all of mine at the buzzer. still counts!! luckily i got to get up early on saturday cuz after i came back, i was pretty much chained to the table. it felt very otakon-like. we're trying to attend one more smaller convention down in Richmond, VA called the VAComicon but not sure if that's going to work out yet. mostly because we can't seem to get a hold of anyone when we inquire about setting up as artists. no buenos. if we don't end up going to that one, at least we've closed the convention year with a nice bang. =)
i'm posting the pics of my commissions that i managed to take before folks came and picked them up. i'm missing maybe 2 or 3 cuz some came to collect sooner than i had the ability to take the pic. we didn't even get to do any of our usual free quick sketches cuz we were too busy! wowsers. we were in full force this weekend with the 4 original gunclappers plus the 5th freshest member, Domo. (the pic of Powergirl and Deadpool is a very particular request. the guy wanted me to draw Powergirl like how i had her in my print but have Deadpool drooling behind her. so Domo did the Deadpool!) he's so flippin talented i can't even describe. all i know is i'm glad he's with us and not against us. i'm not one to toot my own horn or gloat but i do think i have surrounded myself with some of the best artists in the industry. all these guys are tremendously talented and i am very humbled to be considered part of their league and even more so be allowed to sit at the same table with them! *gush*
i can't wait for next year's conventions to start! the first stop should be Megacon in Orlando. and u best believe i will be taking quite the detour either pre- or post-con to the magical land of Harry Potter!!! it's gonna be so flippin sweet i won't even be able to put it in coherent words. almost as excited as i was when i went to my honeymoon. kekeke