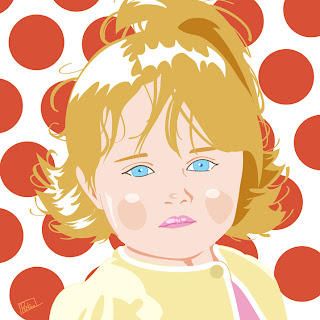 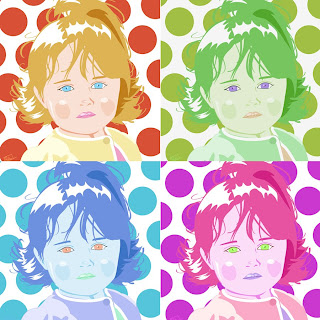 not really a fitting title for this blog considering the extremely cute little girl that i illustrated. =P but rules are rules and i said i'd make the titles of these blogs whatever i happen to be listening to at the time (unless it's some important title).
at any rate, this is a commissioned illustration of a friend's baby girl. she just turned one this saturday and this is a gift for her mom. she's quite a cute little girl so i have nothing to do with how cute this looks - it's au naturale! =D the first image was what i originally intended to give as a final product but due to my insomnia the other night, i decided to just try out a Warhol-inspired version at like 4 in the morning. the mom ended up liking it so that was kinda nifty! the final piece is 12x12.
i did the illustration completely in Adobe Illustrator with shapes and colors. =) (i didn't use Live Trace or anything cuz frankly i just don't know how. kekeke) the Warhol coloring was done in Photoshop.
i'll have a couple more of these to show shortly as well. being sick has really screwed up my internal clock. i'm behind on lots of things again even though i tried to get right at the beginning of the month. i swear if it's not one thing, it's another. i'm goin on my 2nd week of being sick and it's really wearin me down. and to top it all off, our xbox has once again received the Red Ring of Death!! F-in bastards and their F-in faulty piece of machinery! if it weren't for Halo i wouldn't even bother with it. so now Halo:Reach is finally coming out tomorrow and we're without a machine to play it on! perhaps it's fate tellin me i don't need distractions since i'm behind my work enough already. Microsoft could at least give us 360 owners some type of coupon for like $50-$100 off the new Elite system so they can stop getting sent these busted 360s to fix. poopies.

The pictures is fabulous!!! Thanks, again! Having talented friends has its benefits! See you soon... xoxo